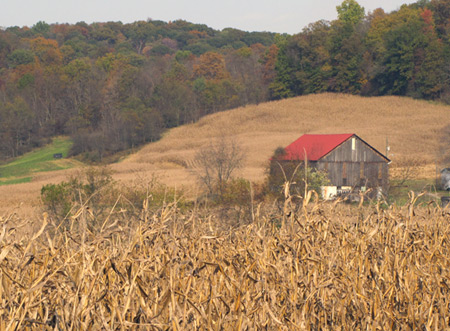 I’m privileged to own a 100-acre farm in Ohio big buck country. I paid as much for my farm five years ago as you likely did for your house. My “farm” has no buildings but I call it my farm. The taxes are considerable and the monthly payments are as much as a house mortgage. I also invested in improvements, like nearly 1 mile of woods roads and six food plots. In that it is surrounded by 900 acres of Black Angus pasture and was previously a jumble of un-reclaimed strip mine land, it is a jungle. In whitetail terms, it is a sanctuary. It supports four lakes and a big swamp. I tell you this because I’m a landowner and I understand stewardship. My farm is bowhunting only. I only allow family members to hunt there and two great friends. We hunt it 8-days a year. It is all posted. If you’d ask me for permission to hunt there I’d tell you the above. I am an example of one of the descriptions in the research below.

Because I’ve taken friends out to Ohio to hunt public land for over a decade I also understand public pressure. Ohio has little pressure on the public where we bowhunt. Nonetheless I did some research three years ago and discovered that Ohio DNR has a program where Ohio farmers can sign up and open their land to limited hunting with permission. After some research and three closed doors I met a retired farmer who was somewhat receptive. He eventually became a friend and my friends now bowhunt his farm.

We didn’t first show up with face-paint and bows in our hands on opening day. On the contrary, a friend and I met him two months before hunting season and sat on his patio learning about him and his farm. I learned that he loved to read non-fiction and sent him my favorite book of all time titled, “The Frontiersman” by Eckert. The true story took place where my farmer friend grew up in south central Ohio. The hero of the story is Simon Kenton, Daniel Boone’s best friend. He read it, I called him and talked about the book. He loved it.

I also noticed that he was wearing some old leather boots that looked real comfortable. In that I work with ATSKO and they make the best boot waterproofing in the world, I took him a blue can of Sno-Seal. I told him how to apply it and he rejuvenated his favorite boots. The Sno-Seal and the book together cost me under $20. He owns a half-million dollar farm.

On year two of our relationship one of my quality bowhunting buddies came out of his woods and saw him working on a corn picker. My buddy, who is a welder, jumped in and gave-up the evening hunt and spent the afternoon fixing his farm equipment. Relationship, it is a big factor.

Have you ever wondered how you can predict who will grant you hunting privileges on their land and why? Well, some researchers out of North Carolina State University researched this issue and discovered some of the whys. Do you ask everyone if you can hunt their farm or do you do a little research and hi-grade the list? Here is what the research uncovered.

So, what have you learned? Look for old farms where the farmer is still planting crops. If that farmer grew up there, it is a good thing. He probably understands hunting and conservation. If there is an old barn on the property the landowner may have lived there for more than thirty years. Now you’re getting close. The biggest part of the equation and one the researchers failed to examine is how you approach the landowner. Stop by way before you want to hunt. Make a relationship with the landowner. If you get permission be sure to take him some venison jerky or sausage around Christmas. Nothing beats relationship.