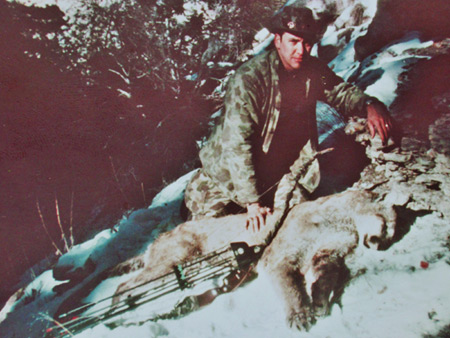 I WAS ONE of the lucky ones. After two fruitless seasons spent trying to get within bow range of any legal whitetail, I finally got a shot on the last day of Indiana’s 1963 archery season. The old rut-goofy buck I killed was a survivor of maybe half a dozen or more previous Hoosier bow and gun seasons – and God only knows how many mano a mano breeding battles with rival bucks. His only misfortune was crossing paths with a greenhorn bowhunter who controlled his pounding heart, wobbly knees, and shaky hands long enough to draw and release an arrow.

Gaunt from weeks of non-stop rutting and a lack of food and rest, that aged buck wore headgear that was obviously on the decline from its glory days. There were only three points to count on each side of the rack. His brow tines and second points were of decent length, but what  made those antlers truly eye-catching were the spread and length of each beam, combined with  unusual overall mass.

Man, what mass! Six and one-half-plus inches of base circumference for each burr measurement, numbers that were better than all but a couple of other entries. While I didn’t know it at the time, I’d just tagged the first whitetail buck with typical antlers large enough to qualify for the Pope and Young Club records. Sure enough, when the initial P&Y Bowhunting Big Game Records of North America book was printed in 1975, my Hoosier deer ranked 568th of the 591 total whitetail entries. Not bad for a six-pointer that was only one of two entered.

Of course, when I killed that first deer back in ’63, the fledgling Pope & Young Club was only two years old. Few bowhunters, including me, knew much of anything about the new organization that Glenn St. Charles and his like-minded friends founded in Seattle. Their goal was (1) to keep scientific records of North America’s outstanding bow-killed big game animals, and (2) to prove the effectiveness of modern archery tackle for hunting the continent’s various big game species. Believe it or not, many state and provincial game departments – and more than a few rifle hunters – were skeptical, stating that bows and arrows lacked the power to consistently make quick, clean, and humane kills.

Never mind the well documented bowhunting accounts of Will and Maurice Thompson during the post-Civil War era. Never mind the writings and filmed exploits of Saxton Pope, Art Young, Will “Chief” Compton, and the Yahi Indian, Ishi, in the first quarter of the 20th century. And never mind our sport’s legendary hunters with names like Pearson and Bear and Hill who fired the imagination of millions with their inspirational and exciting books and movies. The skeptics remained doubtful and shared their concerns with legislators and conservation officials alike. Legalizing archery tackle and establishing seasons for hunting archers took time and effort.

I DIDN’T JOIN THE P&Y CLUB until January of 1971. By then my own hunting experiences had taught me just how deadly efficient hunting bows and arrows are. After tasting more Midwestern whitetail hunting success, I looked for additional big game challenges.

My first-ever mule deer fell to a single arrow through its heart on a solo Colorado bowhunt in August of 1965. My first cougar, a stock-killing Utah lion, was taken January 2 of 1970, and I shared that unforgettable adventure in Outdoor Life magazine. On June 16, 1971, I killed my first cinnamon-colored black bear in western Colorado and wrote a feature article for Bowhunter Magazine, the spanking new periodical that three friends and I began publishing in August, only two short months after my ’71 bear hunt. Both the bear and lion easily qualified for the P&Y listings, and I was only beginning a 35-year career with Bowhunter and an even longer involvement with the leadership of the Pope and Young Club.

Back then, for a P&Y member to qualify for Regular membership, he or she had to have tagged three different North American big game animals of different species, at least one of which had been entered in the Club’s records. With three separate species already entered by ‘75, I applied upon meeting the additional requirement of having been an Associate for five years. So by the time the Club’s first record book was unveiled later that year, I was officially a Regular Member.

More important to me, following my first P&Y convention in Denver in 1972, I’d been named Editor of that first record book. That meant I’d be working with Club founder Glenn St. Charles and bowhunting legend Fred Bear, as well as other P&Y officers I came to know and admire. Dr. Larry Bamford, who had replaced Glenn St. Charles as Club President, was already a friend who wrote a “Trophy Hunting” column for Bowhunter Magazine. Others of note were Chuck Young, the grandson of Club namesake Art Young; artist Wayne Trimm whose drawings illustrated the first book, and the men who had been leading P&Y since its incorporation in ’61: Dick Mauch, Harv Ebers, Scott Showalter, George Moerlein, Carl Hulbert, Dr. Lowell Eddy, and Norm Goodwin.

Though none of us knew it at the time, the record book project would turn out to be a multi-year effort rife with unforeseen snags, problems with collecting and typesetting several thousand record book entries, multiple printing delays, financing issues, and other assorted headaches. In next month’s “Making the Book” (Part II), I’ll continue to document the history and amazing growth of bowhunting’s record books from inception to present day.