by Brandon Cox
in Bowhunting Blog, Bowhunting Videos, Wild Hogs
0 0
A A
0 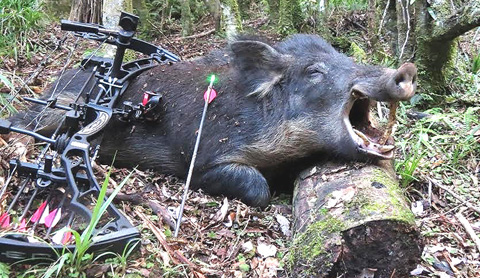 The smell arrived before the wild hogs did. The pungent odor told me two things…

That stink said they had a mature boar in the sounder (A sounder is a herd of feral hogs consisting of one or more adult sows and one or multiple generations of offspring).

It was also possible some boars were right on the edge of maturity. Once mature, they’d be kicked out of the sounder, or just leave, and would spend the rest of their life chasing sows in heat, finding food and fighting with other boars.
The porkers slipped through the woods as quiet as a deer. Surprising for an animal that’s known for making a huge amount of racket. But these feral hogs had learned that noise attracted unwanted attention. The unwanted attention they were about to get courtesy a Matthews Featherlight and  a 100 grain Toxic broached.
The lead hogs stopped at the edge of the opening. Jittery. Nervous, Ready to bolt if anything seemed wrong. No mature boars, but plenty of eating size sows and younger males. The sounder was used to coming to the feeder in this Texas prarie country, but they’d also seen some of their kin “take one for the team.”

Feral hogs are the smartest animal in the woods these days. They learn incredibly fast. They also knew that they often fed right there and nothing happened.
Hunger and sweet corn mostly overrode their wariness and they came out of the woods. As they hoovered up corn, they started the grunts and squeals of happy hogs.
The arrow eased back. 20 yards. Aim low and back on the hog. In a completely stationary target, that shot would be low and in the guts.
But this particular edition of wild bacon was anything but stationary.
Ease the release.
As expected, the sow jumped the string by crouching down and back, putting power into the Achilles tendon for an explosive start back into cover. The arrow slammed home, picture perfect through the ribs and, as the butchering later showed, through the back side of her heart.
She ran 30 yards and folded. 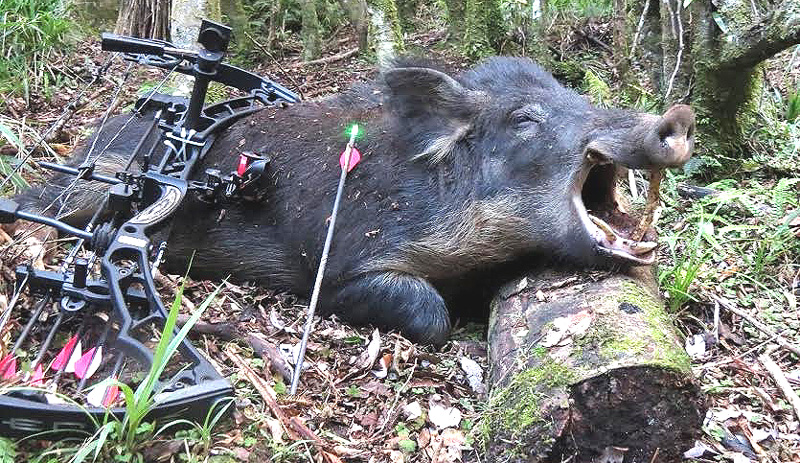 Hunting these wild prarie hogs with the best compound bow requires patience, a good ground blind and a willingness to aim where the hog will be after the arrow is sent flying. Aiming at the kill zone, especially on a smaller hog, means the arrow passes just in front of the chest wall or through the front part or lower neck.
Here are five things you need to know and do.
1) Boars are tough.
You need seriously sharp fixed blade broads. Yes, some hunters will say they kill plenty with mechanicals. If you are serious about putting a big tusker on the way, shoot fixed. If you are after a small meat hog, mechanicals are fine. Why fixed?
Wild boars have a boar shield covering their chest area. The older the boar, the thicker the shield. It’s not cartilage, despite what some people think. It is extra-tough flesh. And I can absolutely confirm what the Extension Article says is anecdotal evidence. I shot a 70 pound running boar with a  cap & ball .45 revolver with enough powder to punch through any deer. After I dispatched the hog with a 12 gauge slug, we found the .45 ball embedded in the shield. It never penetrated into the chest.
You also need enough weight on the bow to launch the arrow with force. A 45-pound draw is OK for small meat hogs. You need 60+ pounds for a trophy.
Get close. Arrows lose kinetic energy the farther they fly. You need as much punch as you can get.
2) Be quiet.
Wild hogs have phenomenal hearing and a pretty decent sense of smell. Their eyesight is on par with Mr. Magoo. Pressured hogs have learned to bolt at the slightest noise. If the hogs have not been hunted much, they will still be wary, but not like porkers that have been shot at a few times.
Deer stands are excellent If the hogs are not hunted, just put on some good camo and be still. Sit on a shooting bucket. I’ve literally had wild hogs walk right past me, never knowing I was there.
3) Stay put after the shot.
Bowhunting means you can get off more than one shot, especially on hogs that haven’t been hunted. They will squeal when the first arrow slams home. Some will run. Some will stay put and continue to eat. That’s your chance to bag another one. Wait a bit because they will often come back to finish eating. Bowhunters going after untapped herds can get three or more before the sounder finally relocates to the deep woods. Here’s an example of a stalk in Texas where the hinter bagged two within seconds.
4) Heavy arrow.
In addition to a strong bow, you want a heavy arrow, especially if your target is a trophy boar. That arrow has to push through the boar shield. A lightweight arrow does not pack the kinetic punch of a heavier arrow. If you hunt more than one game with your bow, remember your sights need to be adjusted when moving from a light arrow to a heavy arrow. But hey, sighting in means more range time which makes you a better shot anyway.
Speaking of arrows, that brings us to tip 5.
5) Butchering care.
Since you are bowhunting, bone shards that can cut you are not a major issue. But the arrow is. Remove it before butchering. If you plan to hang the arrow with your trophy hog, soak the arrow in a disinfectant first. Get rid of that blood!
More than any other animal, you must use caution when butchering wild hogs. Use gloves. Cook the meat Well. Done.
As the Texas Parks & Wildlife department says, hogs carry “Various diseases … pseudorabies, swine brucellosis, tuberculosis, bubonic plague, tularemia, hog cholera, foot and mouth disease, and anthrax. Internal parasites include kidney worms, stomach worms, round worms and whipworms. Liver flukes and trichinosis are also found in hogs. External parasites include dog ticks, fleas and hog lice.” The primary concerns are pseudorabies, brucellosis (aka undulating fever) and trichinosis.
Author bio:
Brandon Cox loves everything hunting and regularly posts on his blog https://stayhunting.com where he shares his experiences in hunting giving you the latest hunting information. You can find more from Brandon on Twitter.
Tags: Brandon Coxwild hog bowhunting tips
Previous Post