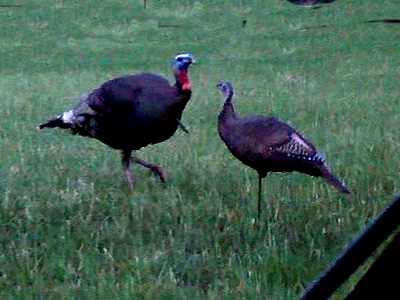 Sometimes It All Falls In Place!

Rain interrupted our wild turkey bowhunt and the Duck and I waited it out at Jim Mitchell’s Red Oak Ranch. It cleared off the next day in time to get back in the turkey woods. We returned to where the Duck had tagged his second gobbler during a morning hunt two days ago. And this time it was my turn to do the hunting.

Although there was a lot of activity it can be summed up like this; we saw 10 hens and even more whitetail deer. Late in the afternoon I got a bunch or response to my calls. However, it was too late in the day and they were roost bound. But we heard several fly up in the adjacent strip of woods.

We pulled the blind and quietly moved it to the opposite side of the strip. Afterward we drove into Brownwood and ate some delicious Chicken Fried Steak and mashed potatoes.

The next morning we were in the blind listening to gobbles in 3 directions.

When I could see the area I began a series of what I call “Trolling Calls.’ Gobblers answered from the strip and further away in the woods in front of us and to our left. I watched the treeline to see if anything came into view. 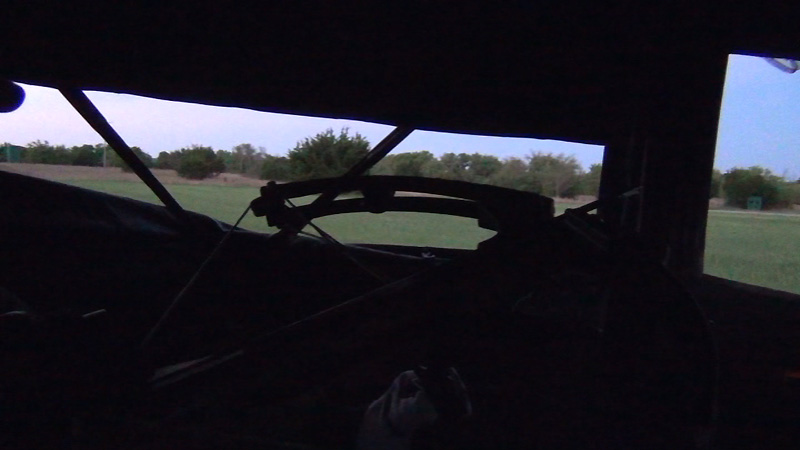 I called with more volume and right away I saw two different gobbles moving our way and talking as they came. Two hundred yards apart, both gobblers paused at the edge of the trees and looked things over.

I gave them my best, ‘Get over here’ call and the one furthest to the left instantly entered the field. 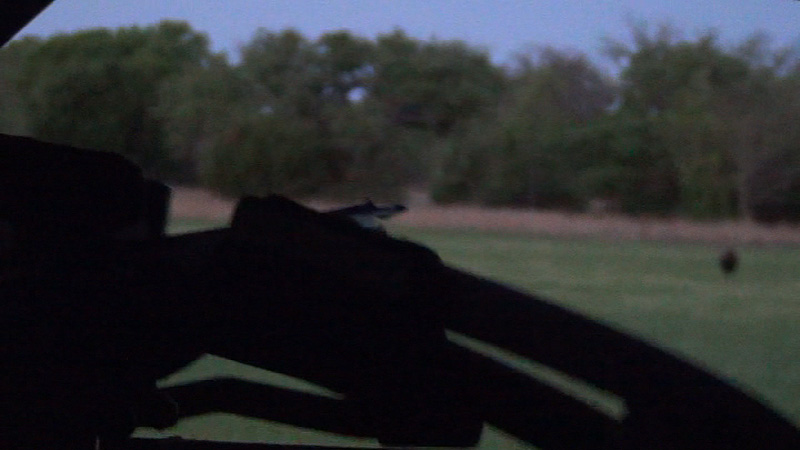 He was coming on at a steady pace. Things looked promising. I got ready. 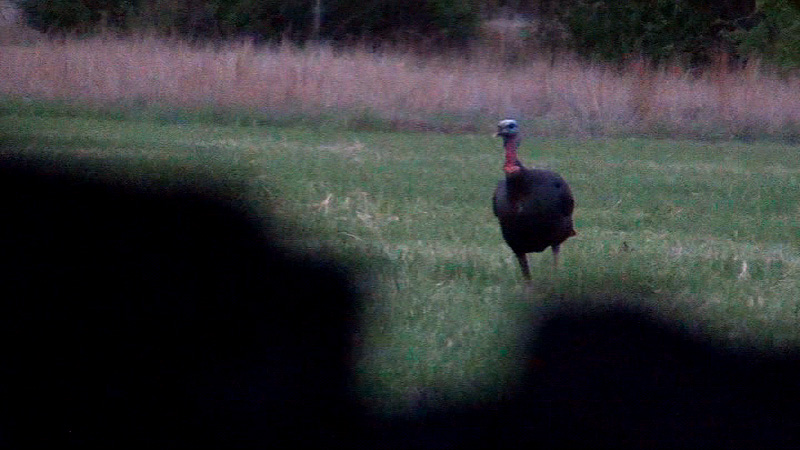 When he was closer he slowed down. I cut at him. He liked it and headed toward the decoys. 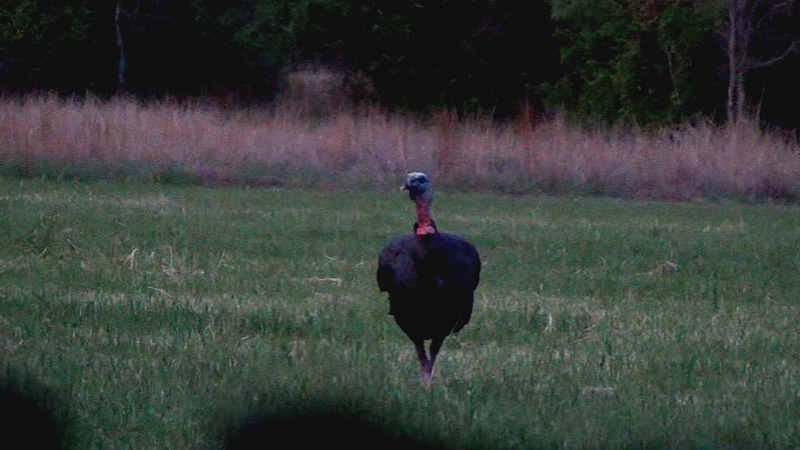 In seconds he was at the decoys and went right past the jake decoy.

He was more interested in the realistic looking hen decoy and slowed way down as he approached the decoy, eye to eye. Meanwhile, I was eye to eye with my sight. I aimed for the vitals. 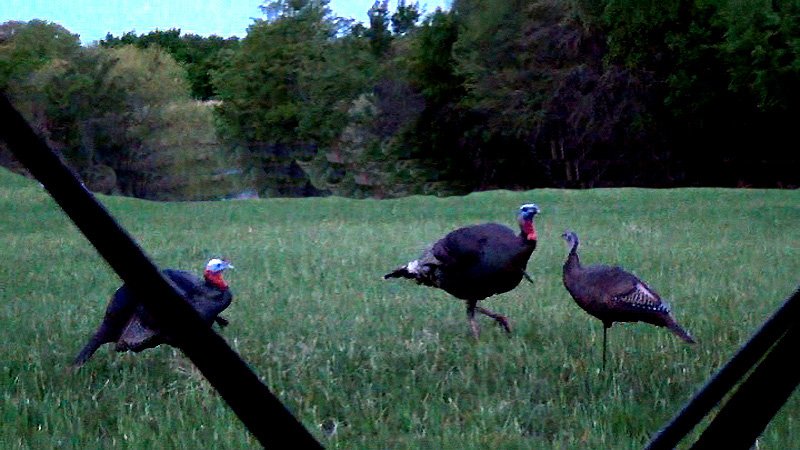 My arrow hit and stayed with him as he tried to fly. 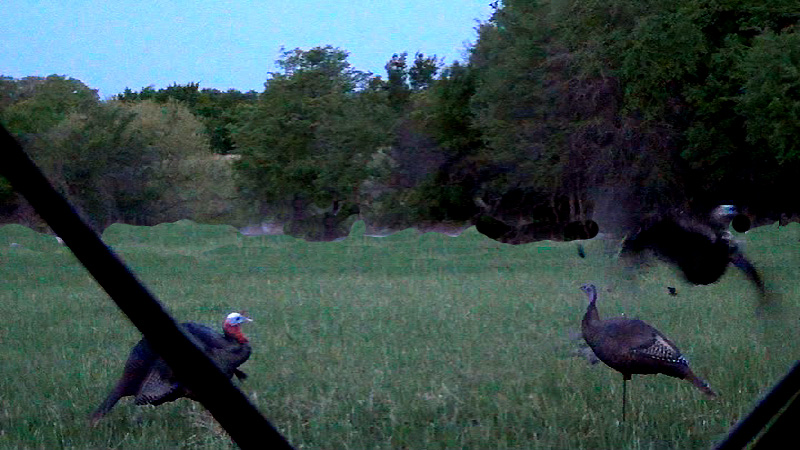 But he couldn’t get any height and landed … and went into the woods of the strip. 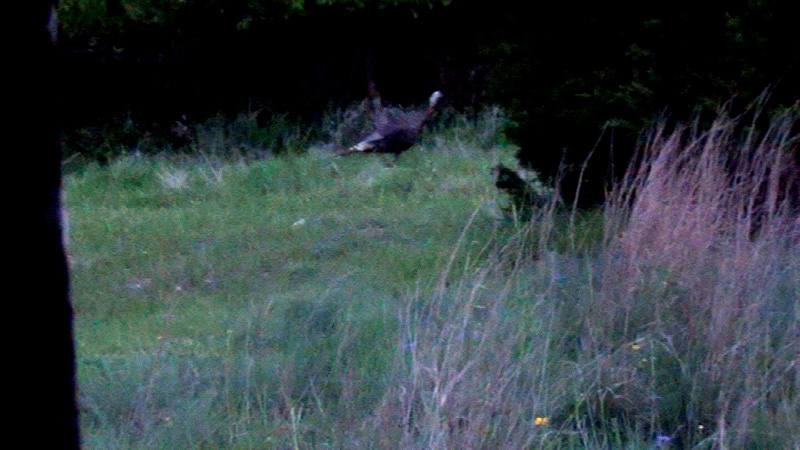 We waited half an hour and went over there and started looking. We looked in the strip but couldn’t see him. However, I did find my arrow near the opposite edge of the narrow strip. Then I walked the edge of the trees and there he was. 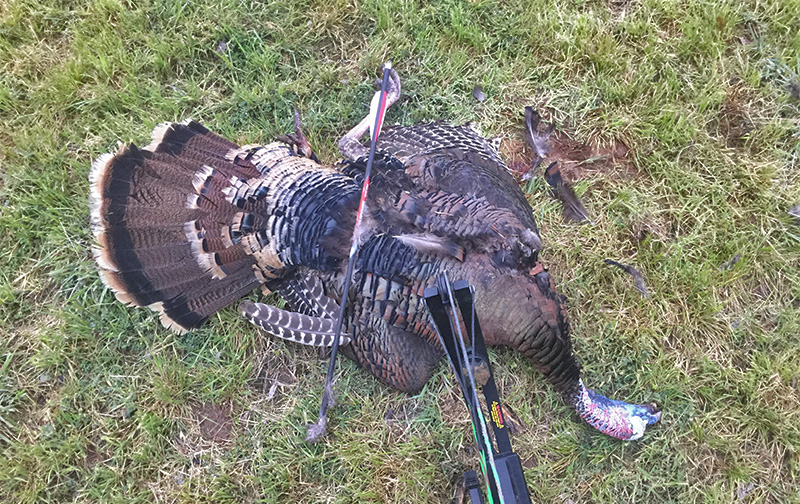 I laid my Black Eagle Arrow across him and took his picture with my iPhone.

I used my prefered broadhead, the tough, sharp and accurate 3-blade Whitetail Special, 100 grain with the 2-inch cut from the serious bowhunters at Grim Reaper broadheads. I’ve been lucky enough to put my tags on a bunch of wild turkeys over the years and nothing else that I’ve ever used puts them down time after time like this great shooting, tough broadhead.

I used the the Executioner crossbow bolts from Black Eagle Arrows. They have proved to be tough and accurate. Their crest makes them very  good looking too.

Before last deer season I tore the rotator cuffs in both my shoulders. I couldn’t draw my bow. Darton Archery came to my rescue with a Scorpion Crossbow that is 175 pounds. However I was unable to cock it and again Darton helped me out with a mechanical Crossbow Cocker called the EZ Draw Winch and that worked for me and I got back in the woods for real. The power and accuracy of this top of the line crossbow is impressive in every way.

Nikon sent a scope sight for the Scorpion. It’s proven to be a deadly combination.