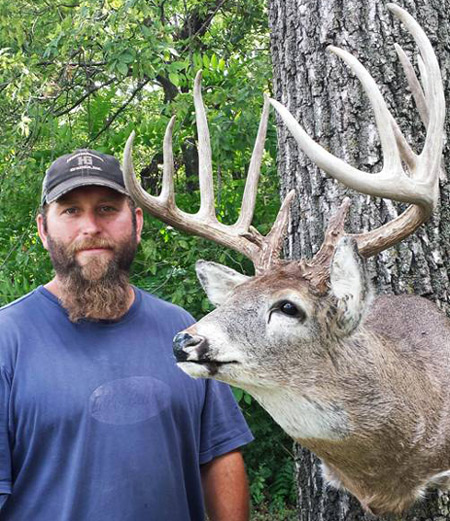 On Monday, November 23, 2014, Olson got into his stand about 30 minutes before daylight. Several does and a spike buck walked right under his stand. About 8:45 am, he picked up his rattling antlers, rattled them and then stopped. A big-bodied deer came through the timber and stopped at the fork of a trail to walk to or away from Olson. As the deer looked away, Olson gave a soft grunt call causing the buck to turn and look at the tree where Olson was. The nice buck then jumped across the creek, surprising Olson. Next the buck walked toward the back side of Olson’s tree stand. Olson had to turn completely around to shoot without getting tangled in his safety harness. He noticed about a 4-foot wide shooting lane and hoped the buck would walk into that lane. “I didn’t get a really-good look at the buck’s rack until after he jumped across the creek,” Olson reports. “Then my heart started pumping overtime, because he was the biggest buck I ever had seen and realized he was Big John – a buck named earlier by some hunters.”

The buck slowly moved downwind of Olson’s tree stand. Luckily, the buck was apparently walking under Olson’s human odor, because Olson was high in the tree and the thermals were pushing his human scent up instead of down. Olson didn’t have a shot until the buck was 10 feet from the base of his tree stand. “I never had practiced shooting straight down before with my bow,” Olson mentions. “I’d only been bowhunting for 3 years and had taken two does but no bucks.”

Olson drew back his Martin Wildcat bow with its Muzzy four-bladed broadhead and aimed behind the deer’s front shoulder. The angle of the shot made the arrow crash into the animal’s spine, dropping Big John immediately. He then rolled down the hill and landed in the little creek below Olson’s stand. “Big John tried to get up using his front legs, but he was paralyzed from just behind the shoulders all the way to his tail,” Olson says. “I quickly nocked an arrow and delivered a heart shot.”

Olson’s arrow was shattered into four different pieces from the impact of the broadhead hitting the deer’s spine. Olson called his cousin and a couple of friends to come help him get this huge animal back to his truck. “I guessed Big John would score 175 to 180 net score, but I didn’t have a clue about how big this buck’s antlers really were, or that they would have a composite score of 201,” Olson explains. “Each base was about 6 inches in circumference, and many of his points were 12-inches long or more.” 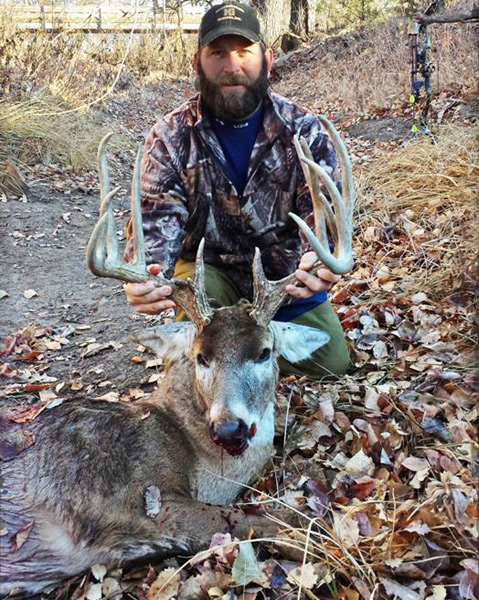 Olson called his friend – a taxidermist named Wayne Johnson – who lived about 20-miles away and told him, “I know how to field dress a deer, but I don’t know where to start opening the cavity to not damage the hide for a shoulder mount.” Johnson replied, “If you mess up that cape, you’ll have to spend at least $75 to try and get another cape that will fit the antlers. So, bring the whole deer to me and let me cape it out.”

And, that’s what Olson did. 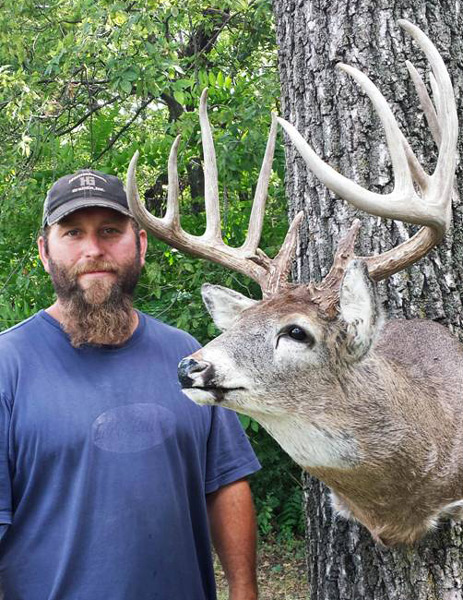 * Official Buckmasters’ Score: 182 (doesn’t include inside spread of main beams)