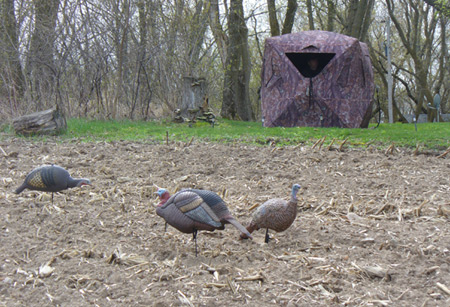 With the snow starting to melt, the days getting longer and warmer and being cooped up all winter it was time to get outdoors again.  And with  turkey season just around the corner I started making plans and get the ball rolling.  Here in Minnesota you must apply for the first two, five day seasons and select a zone.  There are six five day seasons  and 12 zones to choose from.  Season ‘A’ opens April 12-18, ‘B’ April 19-25.  ‘C’-‘D’-‘E’-‘F’ are over the counter tags with the ‘F’ season open to anyone who has not filled their tag in the first five seasons.  If you choose to bowhunt you can hunt any season and any zone.  This was going to choice for the 2017 turkey season.

I made a call to my friend Jim Regan to see if I could hunt his property again.  This is a turkey hunting hot spot. Rolling hills, valleys and a small pond with waterfowl flying in and out all day  and is not far from my house. For me this is perfect spot, all I need to do is park by his garage, go about 40 yards across his lawn to my blind that I have set up on the edge of a field right in his backyard.  And I mean backyard I am not 15 yards from the house. It doesn’t get much easier than this. For someone in a wheelchair this is a great spot. 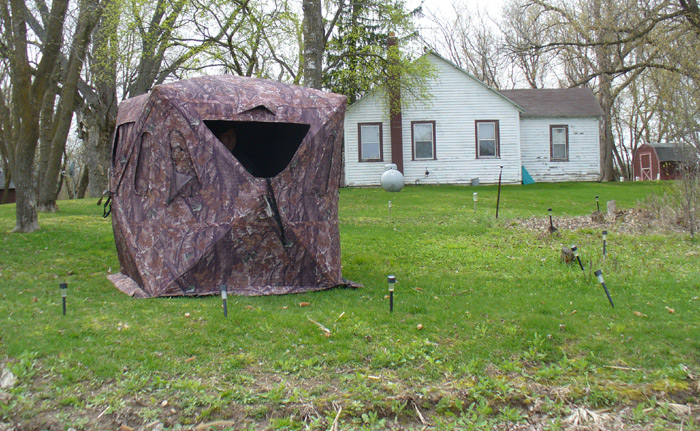 Jim told me he didn’t see much in the morning but in the afternoon a huge flock would come across the field and up into his yard.  This all sounded like a sure thing but I would have to see this for myself.

Once I got permission I bought a tag and was ready to go.  Next I got my crossbow out of storage, checked it over and started shooting. Then I got out the decoys and made sure they looked okay. I dug out  my turkey calls and started practicing. I picked up my slate call and  made some sweet hen music.  My wife said it sounded more like noise and I  was banned from calling in the house so I went outside and in between shooting session would try out my calls.  With everything ready I just had to wait for the opener.  I had no one to assist me for the first  three days and it was Friday  before my wife could go with me. We drove to Jim’s that afternoon and set up the ground blind.

As I looked around I could just tell this was the place to be.  We put out the decoys, loaded all our gear in the blind and sat back and got ready for the afternoon hunt. It was cold and windy, not good weather for turkey hunting.  We only saw one hen so with no action we packed up and went home.

A week later I got another chance when my grandson Reyden, said he would go with me. We got to Jim’s, unloaded our gear, set up and were ready to hunt by 3.00 pm.  Again it was cold and windy so calling was useless.  It was a long sit with no turkeys moving so I told Reyden that at 7.00 we would pack up. A few minutes before 7.00 I started picking things up when Reyden looked hard out the window and said there were turkeys in the field..  I grabbed my binoculars and about 100 yards away were four jakes and they were coming in fast.  One looked bigger than the other three and had a large white head.  This was the one I concentrated on. I picked up my Ten Point crossbow and got ready for the shot. They came running up to the Dakota Jake  decoy and started pecking it.  With my crossbow ready and when the shot looked good I sent the Swhacker on it’s way.  I heard a loud thump and the turkey folded up right on the spot.  I couldn’t believe it everything happen so fast. I turned to Reyden and we gave each other a high five.  I didn’t know this at the time but Reyden had used his cell phone to video the shot.

We went out and picked up the bird and it had a huge hole in it. The 100 grain 2’’ Swhacker did the job.  I was very impressed with the broadhead performance. I put my tag on the bird, broke down the blind , loaded up all our gear and headed home.  This was only my second time out and I got a turkey it really doesn’t get much better than this. With two tags I am one for two.  In two weeks I am going to Wisconsin and try to make it two for two.