.45 Caliber Round Found in Bear’s Skull 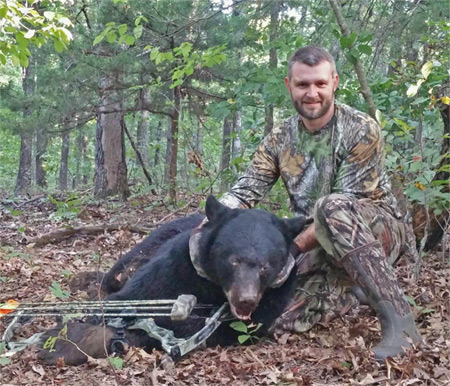 Many bear hunters think about the potential of an aggressive bear encounter when in bruin country. We wonder how we’d respond in a bad situation. In terms of statistics, few people will ever fire a shot or use bear spray in self-defense. However, more and more aggressive bears maul and kill people every year in North America. Would you be able to get to your weapon/spray quick enough? Would you be accurate? Lastly, would the deterrent work? There’s been lots of debate on whether handguns or spray works better. I bet you won’t soon forget this story. 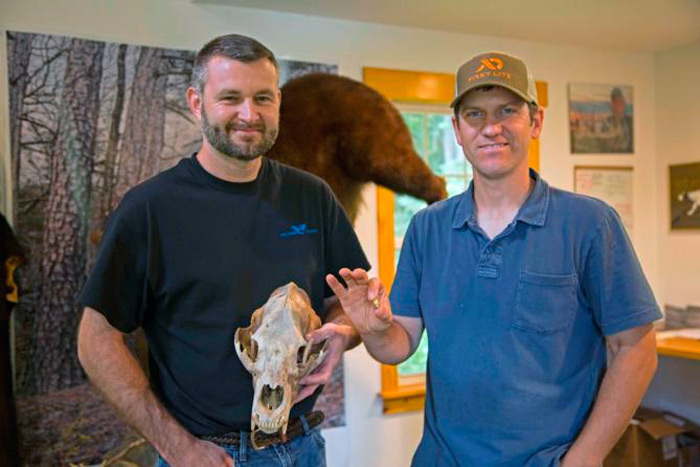 I’m holding the 45 caliber solid bullet found in between the bears eyes. Brandon French killed this bear in September 2016 in North Central Arkansas with a bow – the wound was likely years old.

Today Brandon French from North Central Arkansas brought in a bear skull for me to measure for Pope and Young. When he arrived he told me the bear had an interesting story. He pulled out a 45 caliber solid bullet that he found under the skin between its eyes. The bear had been shot at a quartering-away angle. The bullet hit the bear (presumably from ground level) a couple inches behind the eye and passed behind it, exiting between the eyes – but the bear lived. The bullet didn’t penetrate the brain cavity. No one knows the story, but presumably somebody has a good one. To hit a bear in the head with a handgun you’ve got to be pretty close, or really lucky. 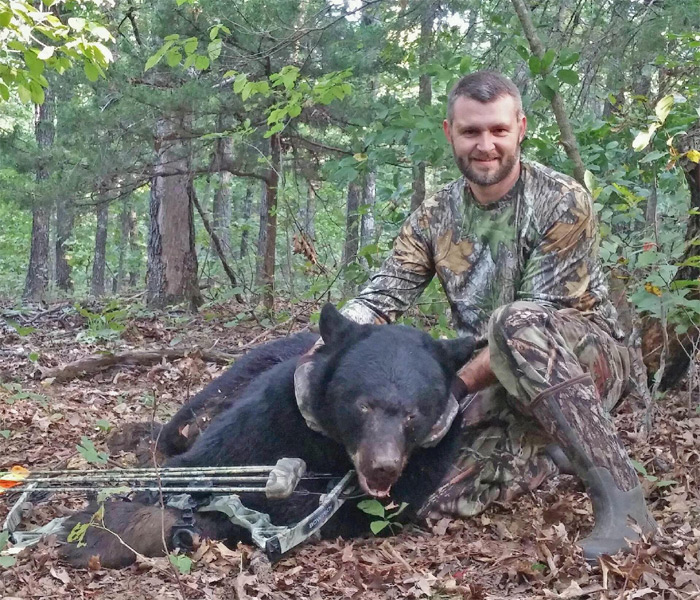 Brandon French with his Arkansas bear. You’ll notice a slight bulge between the bear’s eyes where the 45 caliber bullet rested.

Brandon killed the bear on private land in the fall of 2016 and it was in perfect health. The wound was old. There were no visible signs on the outside of the bear – not even a scar. It’s likely the bear was shot off someone’s front porch at close range while eating birdseed (or whatever). If their intent was to kill the bear they actually made a pretty dang good shot. It’s unlikely the bear was shot in a hunting situation. The caliber, bullet type, the fact that it was a head shot indicate otherwise. Brandon also said the bear had birdshot peppered in its fat. This old bruin had heard the bang of the “fire stick” a few times, however ended up being killed with a bow (Oh, the irony).

Boars are known to have large home ranges, typically covering up to 20-square miles or more. However, some travel further. The Arkansas Game and Fish Commission documented a bear that was killed on a highway in Oklahoma 156 miles from where it was collared in Arkansas. Oklahoma biologists currently have a boar that makes a yearly sojourn over 65 miles (as the crow flies) one-way to his summer range on a cattle farm. Who knows who shot the bear or what the circumstances were, but somebody has a good story – and we’ll probably never know it. This photo shows the entry hole of the bullet wound. It entered the skull a couple inches behind the eye, passed through some hollow space in the skull, and exited the skull between the bear’s eyes. It never penetrated the brain cavity. 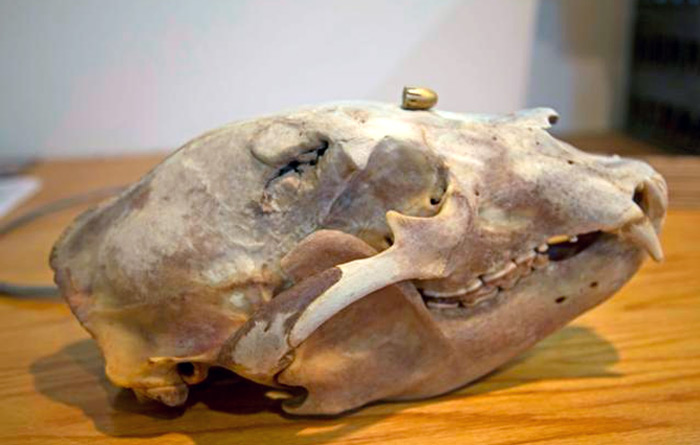 This shows the bullet in the general position it was found under the skin. Somebody made a pretty dang good shot, but amazingly it didn’t kill the bear. There is a VERY high probability that this wasn’t a wound from a hunting situation, but likely a scared homeowner or farmer.