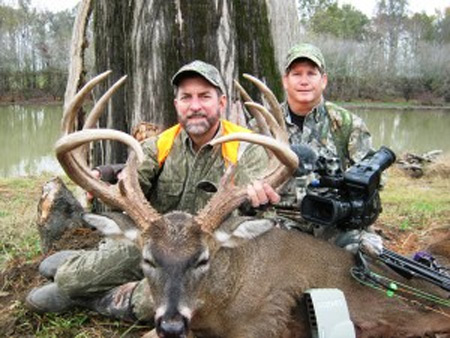 If Robin Hood only had known what Mossy Oak’s Will Primos knows, and if Robin Hood had had the archery equipment Will uses today, he could have fed fresh venison to all the peasants of Nottingham. Although the life of a professional hunter seems glamorous, after spending time with Will Primos, you’ll realize he works harder and spends more hours trying to learn about bowhunting and the whitetails he hunts than other hunters do. His advice will help you find and take more bucks with your bow.

Editor’s Note: Will Primos, a bowhunter for 45 years and the founder of Primos Game Calls in Flora, Mississippi, has produced the “Truth” series of videos and TV productions for numerous years. Primos has spent a major portion of his living pinpointing and taking deer with a bow. If you think the pressure’s heavy when your buck of a lifetime comes in, consider that when big bucks get within bow range of Primos, he has millions of eyes watching him draw and shoot.

“When I was just a little fellow, I liked to slip-up on squirrels and birds and shoot at them with my bow,” Will Primos remembers. “My first bow was a Wilson longbow, and I sometimes built my own arrows. I shot that bow off the side of my hand, because there were no rests in those days. To become a better bowhunter, you need to:

* “Respect the whitetail. When you start hunting deer at the first of bow season, they’ve had plenty of food, water and cover for some time, and no one has harassed them all summer. As soon as they smell your human odor, the whole world changes for them. Never hunt a whitetail where he is but rather hunt him where he wants to be. If you get lucky, you may be able to spot and stalk a deer, but more than likely, you’ve got to anticipate where that whitetail will be and hunt him there. Or, you’ll have to call to that whitetail and make him come to you. Don’t get too close to the area where you think the deer is when you start setting-up your tree stand, and always respect the wind’s direction. Our company makes some fantastic scent-elimination products, but you can’t use hunting aids and ignore good hunting practices.

* “Consider your calling tactics when placing your stand. For instance, if you call a deer that starts coming to you but then stops and won’t move any closer, you may have set your tree stand in an opening where the deer can see well past your stand. If bucks can’t see a deer where they’ve heard the call coming from, they won’t come any closer. Always make sure there’s cover either in front of or behind you that looks like it can hold a deer where a buck can’t spot it. I like to set my tree stand on the edge of a cane thicket.

* “Know how and when to call the deer. Never use a deer call when the deer can spot you or can see from where the call has come. If a buck’s head goes behind a big tree, then give him the buck roar or a bleat call. When he comes out from behind the tree, he’ll be looking and walking to try to identify the location of that call. The timing of when you make a call is critically important to calling in a buck.

* “Hunt the split trails. Before deer season arrives, I go to agricultural fields and find where the deer trails are coming out of the woods and going into the fields. Then I follow the trails back into the woods for at least 100 yards to where each trail splits. That’s where I’ll hang my tree stand, if I get a wind in my favor, because this way I’ve doubled my odds for seeing a buck. I’ve got deer coming from two directions to funnel onto that one trail.

* “Make eating easy for the deer. Often you’ll find groups of trees that produce nuts that deer favor. But you can’t know which tree the bucks will choose to feed under, since the deer have the option of four or five different trees. So, before the season arrives, I’ll clear the ground under one of those oak trees with a rake, a machete or a small hatchet. I’ve learned that the deer more often will feed under a tree with less brush and leaves under it, because the acorns are easier for them to see than acorns under a tree with brush and leaf litter built-up under it. One year, I took a gasoline-powered lawnmower into the area I wanted to hunt that fall and cut down all the trees, bushes and shrubs. Then I vacuumed-up everything on the ground with that lawnmower. Later, the deer came to that tree to feed first.

* “Become the acorn. Once while hunting in an acorn flat, I noticed that every time an acorn fell out of the tree, a deer would leave where it was feeding and go to the spot where the acorn just had fallen. One time I was sitting in a white oak tree on the edge of the Mississippi River, and I could see 10 white oaks from my perch. A big 9-point buck was going from tree to tree eating acorns. Suddenly an acorn fell off the tree to my right about 40-yards away, hit the branches and leaves and finally landed on the ground. When the deer heard that acorn fall, he ran to that acorn. The next time I went to hunt near an acorn tree, I carried a pocket full of gravel with me. I saw a doe feeding and threw one big piece of gravel up in my tree to try to get it to fall through the leaves and branches like an acorn would, which it did. Immediately the deer jerked her head up and looked at my tree. As she put her head back down, I took another piece of gravel from my pocket and dropped it straight down under my tree. When the gravel hit the ground, that doe came running over to my tree, and I took her.

* “Don’t hunt naked. Deer have a sixth sense. I’ve seen young bucks walk right under the tree where I’m sitting, and then once they move 10-yards away from the tree, they’ll stop and look straight-up at me. Once when this happened, I was wearing my Mossy Oak Bottomland camo, which made me invisible. The buck never saw or heard me, but he knew something was wrong. Then he looked-up in that tree and spotted me. I read an article once that said that deer could sense the electrical charges given-off by the human body if the deer got close enough. I believe that’s true. One of the mistakes I think many hunters make is they clear away too-much brush around their tree stands. Then as they sit or stand, their silhouettes aren’t broken-up. Leave some of the limbs in front of your tree stand, and pick the holes in the brush through which you’ll shoot. You may have to shoot over a limb, under a limb or beside a limb, but you’ll see more deer and have more opportunities to take a buck if you’ll leave some of those limbs and leaves to break-up your outline.” 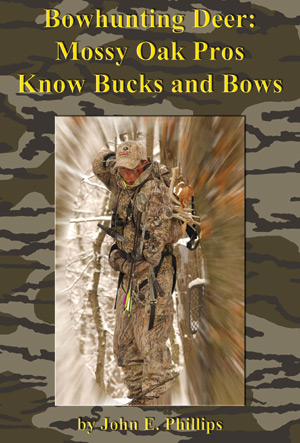