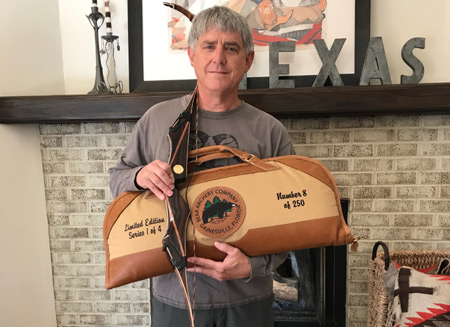 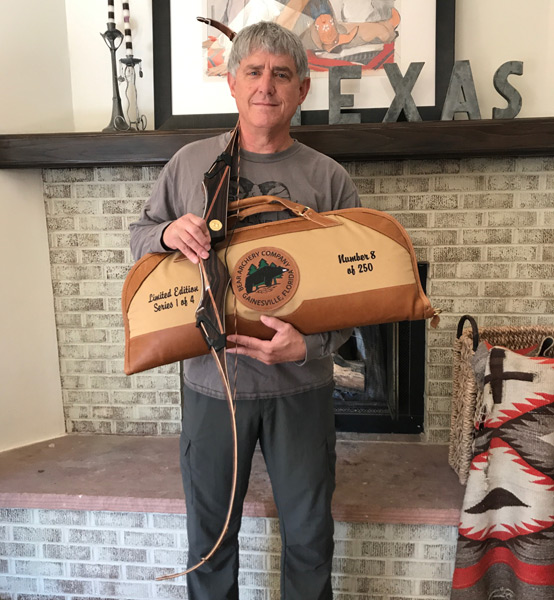 The “Limited Edition P&Y” take-down recurve bow from Bear Archery is a handcrafted, American-made Bear Archery recurve with a B Riser and #1 Limbs, making it 60” AMO length. The three-piece riser is shaped out of Macassar Ebony with two strips of maple on either side of the Bubinga. The face and back of the riser are meticulously finished with 2 brown and 1 white strip of glass. Beautiful Macassar Ebony continues into the limb butts with limb laminations and an extra layer of exotic pattern Bubinga veneer underneath clear fiberglass. Both the riser and limbs are hand polished to a mirror finish highlighting the spectacular wood grain in the exotic woods used. There are only 250 of the Fred Bear limited edition bows, however the Pope and Young medallion is embedded only in these two risers making these bows the only two of their kind. This limited edition take-down bow also comes with a custom, matching numbered leather case. 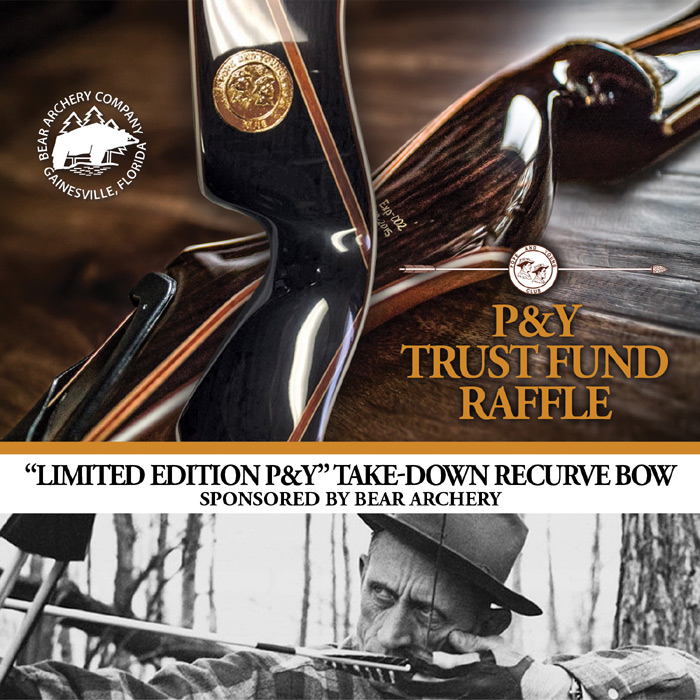 “It is a very rare event when I actually win anything, so you can imagine my surprise at the P&Y awards banquet when I heard my name called out,” said Dirk Dieterich. “My friends said, “you won a bow” and “no, you won THE bow.” What an amazing work of art. The attention to detail is incredible but nothing less than you’d expect from Neil Byce and the guys over at Bear Archery. Even the leather case is spectacular. I am one lucky fella to have won this bow and I will cherish it forever. Now the hard part… with a once-in-a-lifetime Colorado archery Bull Moose tag in my pocket, do I string it up and take it hunting or do I hang it on the wall as a showpiece? My heartfelt gratitude goes out to Bear Archery for their world-class support of the Pope and Young Club and Scholastic 3-D Archery. You are all a class act.”

“I can’t thank Bear Archery enough for donating these two P&Y specific bows to benefit the Club’s Trust Fund and Fred Bear Society,” said Bob Delaney, Trust Fund Officer for the Pope and Young Club. “Congratulations to Dirk, a long-time traditional archer, for being the lucky receipt of the raffle ticket that won this beautiful, museum quality, Bear limited edition bow during our convention in St.Louis, Missouri.”

For more information on Bear Archery, go to: www.beararchery.com

.45 Caliber Round Found in Bear's Skull