by John Stallone
in Bowhunting Posts
0 0
A A
0 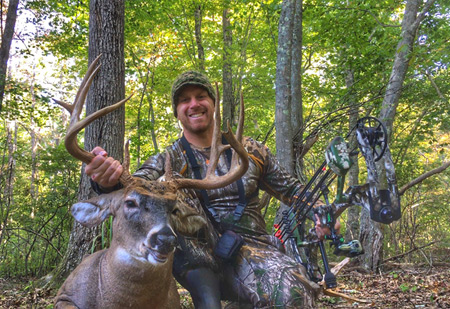 Over twenty years ago, the concept of giving something back to mule deer was a dream of Emmett Burroughs. As Emmett traveled around the country, hunting and filming mule deer, he realized that many of us take this awesome species for granted.Think about what the world was like in 1988. Mule deer had been extremely abundant; right up until the winters of 1983-84. Across the West, the record snowfall lingered long into spring and early summer. Many mule deer and black-tailed deer perished; mostly starving for lack of food covered by snow and from cold temperatures.

A few years later, Emmett observed that mule deer populations had not rebounded from this die-off. Many factors contributed to mule deer not coming back; loss of habitat, predators, poaching, highways crossing through the middle of transitional ranges, and subdivisions being built on winter ranges. State wildlife agencies were busy trying to grow more elk and dealing with endangered species issues.

On top of that, funding to state wildlife agencies was in decline. Mule deer management, which had been a staple of most fish and wildlife agencies, was taken for granted. It was as if mule deer, which were at one time ‘the’ premier big game species, were no longer worthy of prominence.

Emmett gathered together a few of his close friends and acquaintances and asked them to think back at how much they had taken mule deer for granted. He challenged them with the famous words, “We must give something back to mule deer and black-tailed deer.”

During their first year, MDF raised money with a Founding Benefactor Program. The first fundraising banquet was held in Redding with 400 people in attendance, and with over $55,000 being raised. Emmett became the first Executive Director and Chairman of the Board – a position he held for two years before stepping down. Find a fundraising banquet near you.

In 1992, MDF held its first National Convention at Bally’s Hotel & Casino in Reno, Nev. The convention drew many new members and local chapter committees to celebrate what had been accomplished for mule deer. The convention was a great success, and 37 new life members signed on to give something back to mule deer. The national headquarters moved to Reno, Nev., that same year and remained there until 2006, when it was relocated to Salt Lake City, Utah. Plan to attend the next MDF National Convention.

From 1995 to 2004, MDF experienced highs and lows as a conservation organization. Although for many years the organization struggled to raise money, MDF persisted by always staying true to their original mission.

In 2004, the Board of Directors acted to right the MDF ship and move forward in a bold and aggressive way. Pat Juhl was made the Chairman of the Board and CEO. Behind Pat’s leadership, MDF once again began its march toward being a leader in wildlife conservation in North America. Tony Abbott became the General Manager, and with Bob Meulengracht as Director of Field Operations, a commitment was made to the members and local chapters that MDF would put money on the ground for mule deer and black-tailed deer.

In July of 2005, the old Mule Deer magazine changed its format and look, turning into the MDF magazine that it is today; now the flagship publication of the organization.

In 2003, the Board of Directors implemented the Chapter Rewards Program for local chapters. The concept was simple – reward local chapters by allowing them to keep a certain portion of the money they were able to raise at their local event. The chapter members are then able to control where that money is spent, benefitting their local mule deer herds.

In 2006, MDF teamed with the Foundation for North American Wild Sheep (FNAWS) to host a joint convention in Reno, Nev., called “Buck-A-Rama.” What a success that convention turned out to be! Shortly after the 2006 convention, MDF and FNAWS teamed with Sportsmen for Fish & Wildlife (SFW) and together, the three held the first-ever Western Hunting and Conservation Expo (WHCE) in Salt Lake City, Utah. The event raised over $12 million for wildlife!

MDF and SFW continue to work together to host the Western Hunting and Conservation Expo, and it has become one of the premier conservation expositions in the West.

As we look back, the Mule Deer Foundation has grown from just a dream of Emmett Burroughs, into one of the leading wildlife conservation groups in North America. MDF may not have the largest membership numbers (yet!), but we are now putting hundreds of thousands of dollars on the ground each year, which are directly helping mule deer.

What does the future hold for MDF as an organization and mule deer as a species?

MDF will last beyond those who created it, nurtured it, and endured it through good times and bad. In an ever-changing and complex world, MDF will continue to be a conservation voice for mule deer.

And, as a species, mule deer will be more secure in their habitat, more secure from impacts by increased civilization, more protected from highways and, with all our efforts, they will be stronger and once again restored to their preeminence as truly a magnificent animal; held in awe by both those who choose to hunt and those who do not.
Become a part of the dream and the solution: JOIN MDF TODAY!

NOTE: If you really want to get into the hearts and minds of some of the most influential people in the shooting sports and hunting industry you need to visit John’s web site and listen to and read every podcast you find. From us at bowhunting.net, a thumbs up for John Stallone, his web site and his very well done podcasts. Rich Walton

For more go to:  John Stallone