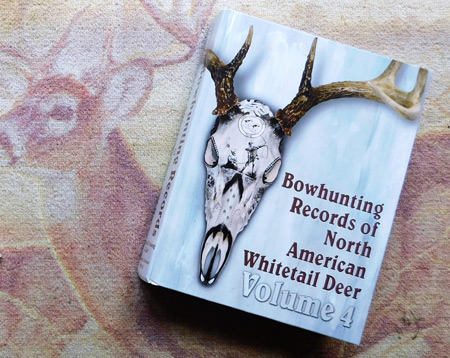 IN LAST MONTH’S COLUMN, Making the Book: Part I, I offered some behind-the-scenes historical perspective on bowhunting’s first record book and my personal involvement as its Editor. Prior to the 1975 debut of Pope and Young’s first official book, appearing a full 14 years after the Club was founded by Glenn St. Charles and friends, there had been only the sanctioned printing of two official P&Y record-listing posters.

The first poster appeared in May 1962, and the second followed in June of 1964. Both featured trophy photos of all World Records and the ranking of P&Y accepted entries by species. The first poster covered 1961-62 and the second covered 1963-64. My own keepsake posters, each signed by Glenn St. Charles, now hang in our Indiana home’s Man Cave along with other treasured bowhunting artifacts amassed over the past 55+ years.

Besides these posters, special reports spotlighting North American big game bowhunting records cropped up at times in outdoor magazines and archery/bowhunting periodicals. For example, in January of 1964, Roy Hoff’s Archery Magazine featured a “Complete List of New (P&Y) World Records.” A photo of Bud Johnson’s Number One Yellowstone elk graced that magazine cover. Interestingly, Bud’s bull scored 366-5/8 and was the best of the 13 elk listed at that time. Additionally, publications like Bow & Arrow and Archery World reported on new World Record bow kills announced by P&Y.

Bowhunter Magazine, which I co-founded with three friends in 1971, has featured word-and-photo coverage every Pope and Young convention held since 1972. The P&Y’s second-ever President and my good friend, Dr. Larry Bamford, penned a “Trophy Hunting” column while he served as Bowhunter’s Hunting Editor from 1971-1980. Also, G. Fred Asbell – another good friend and future P&Y President himself – replaced Larry as Hunting Editor. Fred held that post for nearly two decades. Both men routinely shared P&Y Club news with Bowhunter readers, including any new World Records, providing appropriate photographs as an important part of each every-other-year P&Y gathering.

IT’S IMPORTANT TO KNOW that the Pope and Young Club’s roots can be traced back to 1958 as part of the National Field Archery Association’s Hunting Activities Committee. That’s when the first Awards Program was held in connection with an annual NFAA tourney, and also when the idea of forming a separate organization was first discussed with NFAA officials.

By 1960, St. Charles and a group of serious bowhunters set about forming a new bowhunting organization to be named after pioneer bowhunters Dr. Saxton Pope and Art Young. [Note: The NFAA, which placed an emphasis on target archery as well as bowhunting, had introduced its Art Young Big Game Awards System in 1940.] On January 27, 1961, the first official meeting of the P&Y Board took place in Seattle.

The P&Y Club was officially incorporated June 5, 1963 in Washington State, listed as a scientific, non-profit organization with two membership categories: Associates and Regulars. It was patterned after the world-famous Boone and Crockett Club – albeit with lower scores for record book entries due to the inherent difficulties of hunting with bows and arrows. It was dedicated to good conservation practices, quality hunting, and Fair Chase principles.

As of 1963, there were about 75 Associate and Regular P&Y members, and the total number of big game entries was 361. A year later that total entry number stood at 402, and at the end of 1965 the number of trophy entries was nearly 700. Interest in bowhunting’s new record-keeping organization was spreading. By the time the Club’s first record book appeared in 1975, there were some 2,400 trophy-class animals entered in the P&Y files. Three of them – whitetail deer, cougar, and black bear – had been tagged by a young Indiana bowhunter named M. R. James.

PUBLISHING THAT FIRST P&Y RECORD BOOK was only the beginning. Since 1975, a new and updated hardcover edition has been printed every six years with the book’s release slated to coincide with one of the Club’s biennial spring conventions. Continual growth in the number of official P&Y entries has climbed year after year with entries of trophy-class big game animals rolling in from all across North America. .

The 1975 edition of Bowhunting Big Game Records of North America needed 308 pages to cover the Club’s history and include just over 2,400 official entries collected since statistical data was first recorded. By comparison, the recently published 2016 8th Edition has 1,024 pages and lists some 108,603 entries.

I was proud and honored to be asked to serve as Editor of both the 1993 and 1999 P&Y record books. That ’93 4th Edition boasted 510 pages, but since entries were pouring in the 1999 5th Edition contained a whopping 750 pages. -edited the 2005 6th Edition, which featured 856 pages and for the first time included a CD eBook Edition. Why the eBook? Simply put, including all P&Y whitetail deer entries would have swollen the print edition book to an unwieldly size and weight.

The 7th Edition of the record book featured a whopping 904 pages, plus another eBook version. T. J. Conrads, Editor/Founder of Traditional Bowhunter Magazine edited that 2011 record book. Speaking of traditional bowhunting, P&Y leadership ultimately responded to repeated requests for a separate record book containing only listings of trophy animals taken with traditional bows. Finally, in 2007, A Traditional Journey was published with P&Y’s Glenn Hisey and Pat Lefemine of www.bowsite.com serving as co-editors. Six years later, in 2013, I was named Editor of the Club’s second all-traditional record book, The Traditional Journey Continues, which honored “the challenge, legacy, and romance of traditional bowhunting.” The first book had 272 pages; the second had 268 pages.

Five other official Pope and Young Club books have been published, with four of them spotlighting America’s most popular big game animal: whitetail deer. In all, four editions of Bowhunting Records of North American Whitetail Deer were released (1997, 2003, 2009, and 2015) with Glenn and Kevin Hisey, Curt Wells of Bowhunter Magazine, and Joe Bell of the P&Y staff as book editors. Steve Ashley, a longtime P&Y member, designed each book. There were 616 pages in the first two whitetail record books, 848 pages in third edition, and 962 pages in the most recent book (plus a CD eBook). That steady growth attests to the popularity of whitetails, the species which comprises nearly half of all P&Y record book entries.

A first edition of a final P&Y book, Bowhunting Records of Velvet North American Big Game, was published in 2015. Glenn Hisey served as Editor. It contains 106 pages with a complete listing of the 2,600 velvet trophies in the P&Y archives. The Club first accepted velvet-antlered entries in 1995.

BOWHUNTERS OFTEN SPEAK WISTFULLY of taking animals that end up “making the book.” At the same time, it’s generally agreed that any adult animal, male or female, legally and ethically taken under the rules of Fair Chase, is indeed a “trophy” to the successful hunter who tagged it. Yet it’s not uncommon to dream of huge antlers, horns, and skulls! These are the stuff of hunters’ dreams – and rightfully so. That’s why the Pope and Young Club will continue to inspire hunters to accept the challenge of trying to take outstanding game animals with bows and arrows. It’s an ideal way to pay an appropriate and permanent tribute to any animal by listing it for all time in bowhunting’s long-recognized record book.

Author’s Note:  Anyone interested in purchasing any of the Pope and Young Club’s available record books can go online and visit the P&Y website at www.pope-young.org or phone P&Y’s Administrative Offices in Chatfield, MN at (507) 867-4144. VISA, MasterCard, Discover, and American Express credit cards are accepted.

Kyle And Jennifer Bowhunt "Kick It In Son."