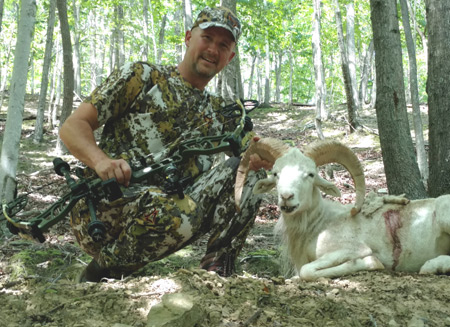 I have the great pleasure of helping Rick Giles with his company Nature’s Essence. It is a wonderful company that makes scent elimination products. I have been helping Rick with his Pro Staff, and I have been fortunate enough to meet some wonderful people. Just this past June, Father’s Day Weekend, I had the pleasure of sharing camp with a few of the wonderful staff members. The group met up at Salt Creek Hunting Preserve in Southern Ohio for a weekend of hog hunting to fill the freezer!

I made the 5 hour drive to Salt Creek Hunting Preserve and met up with the group. I also met the owners Eric and Gayle. I talked with Eric and Gayle a few times through text messages, and it was great to finally meet them in person. Mike Heffner, a fellow staff member had been to the Hunting Preserve a few other times and wanted to show me around the hunting grounds.

The terrain was impressive and very steep. The logging roads made the climb to the top a little easier. As I reached the summit of the main road, my cell phone began to go off. This was the first area I had any kind of signal and all of my messages were coming in. I took a minute to relax and make a few phone calls while looking around the top of the property. I really like the way the property had hidden areas for the hogs, aoudad, fallow deer, Sitka deer, elk, rams, and buffalo.

On our walk through the property we saw many hogs, and aoudad, a massive elk in velvet and a few fallow does. Eric had mentioned to us that a few of the fallow does just dropped fawns over the past week. I was hoping to see one of them but we did not. The sun was beginning to set and we decided to walk back to the cabins where everyone else was enjoying the campfire. It seemed odd to be sitting around a fire when it was in the low 80’s, but the fire and company was very inviting. We all talked for a while about past hunts and Nature’s Essence Products. Everyone was excited to hunt in the morning, and we all headed to our cabins for the night.

The air conditioning in the cabin was a welcome feeling. I slept well in my comfortable bed through the night. I woke rested, refreshed and ready for the hunt. After everyone was up, we had a filling breakfast and were ready to head out. Everyone in the group was hunting with a bow except Parker, Mike’s six year old son, he was using a crossbow and looking to harvest his first animal. Eric, the owner, suggested we all walk together to the top and watch Parker try to harvest a nice hog. We all agreed and began the slow walk to the top of the property.

The sun was barely up, but the humidity was high. The weather was to be in the 90’s with little to no wind. It was very difficult trying not to break a sweat while walking up the steep trail. The canopy was thick and full and it would provide much needed shelter from the blazing sun once it was up. Eric, Mike and Parker went ahead of everyone to look in a wallow for some hogs. The rest of us hung back a bit. I used this time to reach in my pack for my Essence of Fall cover spray. After working up a bit of a sweat, I decided I needed to spray down from head to toe. Even in my early season G-Force Evolved Camo, I still needed to make sure I covered my scent.

Our group watched as the three hunters stalked up to the wallow very slowly. They all stopped and Mike put the crossbow on the shooting sticks. We could hear the crossbow go off and the scream of the wild pig. Eric cheered while Mike hugged his son Parker. Parker had killed a tremendous meat hog and the hunt had begun.

I hung out with the group for a few hours in the morning while they shot a few nice hogs. Two of the men in the group had to go to the emergency room earlier in the morning. One of the men was not feeling well and needed to see a doctor. We were able to keep tabs on them through text messages and they planned on being back before lunch.

Just before lunch we received a text that the two men were back from the emergency room and ready to hunt. I went out on my own for a bit and scouted for some hogs and located a nice group in the bottom ravine. I walked back to camp, met up with the two gentlemen who missed out on the morning hunt and told them about the hogs I had located. They were interested in going after them so they grabbed their gear and we were back on the hunt.

We had to move slowly as Dave was still not feeling his best. When we reached the main trail Eric caught up with us and agreed that we could go after the hogs. Dave was able to get into position as the hogs fed toward him. He waited patiently and when the hog was in range, let his arrow fly. It was true and the hog did not go far. Dave was happy to have harvested his first hog with a bow and mostly happy to head back to camp to get off of his feet and relax in the AC. We all returned for a wonderful lunch and relived Parker’s first successful harvest.

After lunch I talked with Eric and told him I was interested in one of the fabulous rams I had seen earlier in the day. We talked and he told me one of the sand colored Dall sheep and a huge white Texas Dall sheep were off limits but there were others that were available should I see one.  Eric told me I should look at the aoudad. I grabbed my Athens Revolution 6 and quiver full of Black Eagle Zombie Slayers, and I was headed back up the huge hill.

I figured most of the animals would be in the shaded areas escaping the sun and heat so I climbed to the middle of the hill and decided to take the middle logging road. This was a road I had not yet been on but it had plenty of shade and a few water holes. I began to creep slowly down the trail and look ahead and down the hill. Not long into my hunt, I could hear something big heading my way. I found a clump of trees and hid behind them. The animals got closer and closer but I could not see them. What I did see was 6 rams bedded on the trail I just left and they were looking in the direction where the noise was coming from. I finally saw what was coming! Two huge buffalo were making their way up the trail. Man they were beautiful and huge. The buffalo found the trail and headed toward the bedded rams. The rams stood up and began to walk away from me and the buffalo. I couldn’t believe what was happening.

I remained calm and watched as the buffalo headed out of sight. Just as I was about to start walking after the rams, I saw the sand colored Dall sheep walking back in my direction. Directly behind him was a beautiful white Texas Dall sheep and he looked like a shooter. I watched and waited patiently as they slowly cut the distance to 35 yards. All 6 rams stopped for a minute, seemed like an eternity, and just looked around. Two other rams began running up the trail and the group once again moved my way. The sand colored Dall was back in the lead with the shooter white Texas Dall close behind. I hooked my release on the string and thought about the shot. The rams were going to pass about 20 yards directly in front of me.

The rams calmly walked my direction and the sand colored Dall lead the way. I drew back and found my anchor. The green .10 pin on my HHA sight found the vitals behind the front shoulder of the white Texas Dall. I found my spot and let the BEA Zombie Slayer fly! The familiar sound of a well-placed Grim Reaper broadhead was music to my ears. The white ram kicked and ran down the hill about 10 yards. He stopped behind a big tree and started to wobble. I was able to get the shot on video but just as the ram toppled over, my camera was dead. 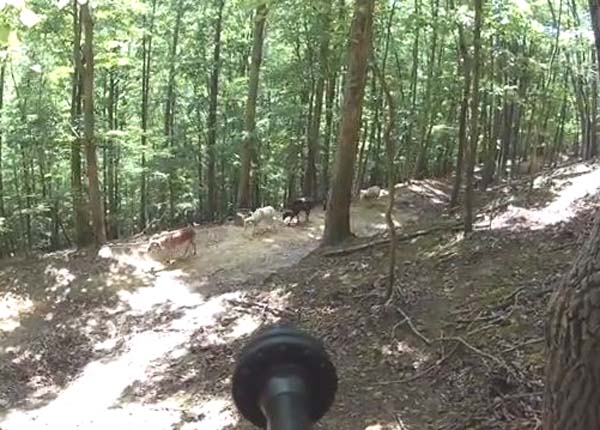 My well placed shot had taken down the ram and I slowly walked to my trophy. He had a beautiful main and wonderful curl to his horns. I was very pleased and I radioed Eric to let him know I had taken one of the rams. As I waited for some of the guides to arrive I had a chance to get some pictures. When they finally arrived they took a few more picture and we celebrated. The guides took my ram back to the cooler so they could begin skinning him and getting him out of the heat. I decided to walk back to the camp and hunt on the way. I figured if I saw an aoudad I would take a shot at him. My walk was peaceful and the high point, I finally saw a baby fallow deer. 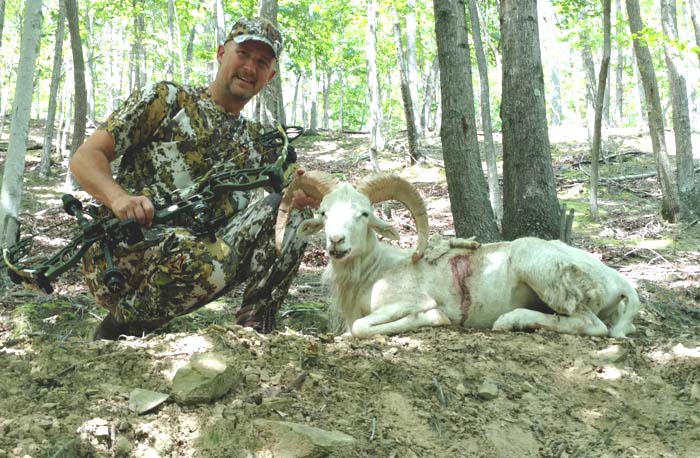 As I returned to camp, the group was there waiting to hear the story of my hunt. I told them the story, and they enjoyed every detail. I went to the air conditioned cabin and put away my gear, took a shower and rejoined the group for dinner.

Eric and Gayle had roasted a hog, a great benefit for hunting at Salt Creek with a group of 10. The meat was so tender and juicy and the meal was absolutely wonderful. Through the evening the talk was all recounting the adventures of the day. Parker was still on cloud nine, Dave was finally feeling better and I was really stoked to have killed a beautiful white Texas Dall sheep. Looks like I am one step closer to completing my Big Horn Slam through Record of Exotics. I have successfully taken the Corsican Ram, Texas Dall and Catalina Goat. I just need to get the Mouflon, Hawaiian Black Sheep, and Merino Ram. Looks like I have my work cut out for me but you can bet I’ll be looking for a return trip to Salt Creek Hunting Preserve.

Eric and Gayle run a wonderful business and are fantastic people. They specialize in hog and exotic hunts so if you are looking for an exciting weekend with great people, please visit their web site.