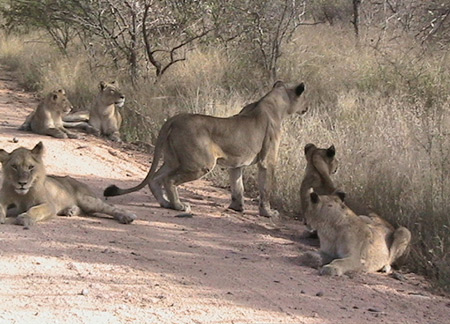 Africa is the best. I’ve spent a lot of time with the big cats. As a matter of fact, my daughter and I run a Photo Adventure Safari that features big cats. Like Brown bears and Alaska, everyone who goes to Africa hopes to see a lion or leopard. The best place to see them are in the international wildlife parks, Kruger Park especially. Like everywhere there are predator prey relationships, there is always more prey than predators. In Africa, the lions stay with the Cape buffalo herds. This may surprise you but their second favorite meat dinner comes in the form of giraffes.

I’m telling you this because I’m going to draw some parallels between North America predators and Africa’s top meat eaters. I was surprised to learn that the big cats don’t rely on scent as a primary sense to help them hunt. Who would have thought that? Lions are lookers. They spot and stalk their prey. That is, they are sight hunters. Lions also rely on sound as they lay in wait for big game such as Cape buffalo to shuffle by. They are so good at listening that they can tell exactly how many meters that buffalo is away. This allows a concealed lion to spring onto it as the others close in.

Their hunting strategy is fascinating to watch. I once filmed a lion hunt in Etosha National Park in Namibia. There is a saying in Africa; “It’s the lion you don’t see.” That is exactly how this hunt played out. One female lion made itself visible to a Gemsbok bull. The bull had eye lock on the lioness and was alarmed but not moving. While he looked at the lioness slowly circling, the second lioness moved in crosswind at a crouch with its belly touching the sand. Suddenly, the first lion charged and the Gemsbok turned and ran directly into the hiding lion. It was over in 30-seconds.

The prey species also rely primarily on sight to spot the big cats but they know what a pride of lions smell like. All prey species in Africa are on high alert at all times. There just so many things that want to eat you that they can’t let their guard down. If you are a prey species you use all your senses at once.

Now let’s move to North America where most bowhunters live. The primary prey species are deer and elk. Both deer and elk know exactly what a predator smells like. To them a predator smells like a bowhunter. We are the apex predator on this continent. I guess I’d add in rifle hunters to this group. Either way it is humans they must avoid. And there are lots of us. About 35-million of us hunt in some form. Maybe 4.5 million us bowhunt.

While we hunters are sight hunters our prey use scent to detect us and they are good at it. A whitetail deer has over 350,000 olfactory scent receptors in their nose. Another animal that has that many receptors is a bloodhound. We know that a bloodhound can smell and Identify a seven-day old fingerprint. Deer are likely that good. So how do we reduce human scent that alerts deer?

The answer is organic. The scientists at ATSKO discovered a way to create body soap and detergent out of coconut oil. They make it with an engineered straight carbon chain. Why is that important? It is because most detergents fail to rinse off our bodies or out of our clothes. Those detergents are created with a hooked carbon chain which contains open bonds which attach to fibers or our skin. Once Sport-Wash Zero attacks dirt it rinses completely out, leaving us odor free. The new line of detergents and scent reduction products that have this technology is called the ZERO Line. Zero scent, Zero UV and Zero residue. Now, go be a predator.

Also be sure and check out:  Death Dance

Kyle And Jennifer Bowhunt “Kick It In Son.”