by Robert Hoague
in Bowhunting Blog, Bowhunting Videos, Wild Hogs
1 0
A A
1 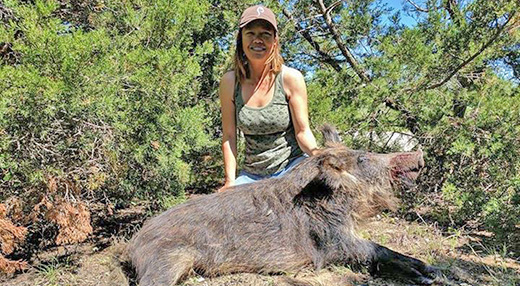 When Cindy Lavender Turned Onto My Road She Called Me. She said, “We’re hurrying, be there in minutes.” Wait,” I replied, “Slow down after the sharp curve in the road before my place and drive slow. I’ll be walking toward you.”

“Should I change into my hunting clothes?”

“We don’t have the extra time. And stay on the line,” I said.

I was already hurrying down the road to meet them. Then Cindy and I hurried back towards my place. We slowed down at the cattle guard and used my house and the old tin out buildings to block us in case the hogs were still doing the right thing and coming our way.

I saw a nice hog about 60 yards ahead, walking through the tall grass. We waited for it too pass us and got inside the closest old building. Every outbuilding, old barns for hay storage mostly, are now set up to hunt from. We got in one and I glassed the area.

Two hundred yards off I saw a hog group. They were coming in this general direction.

“See if you can draw and be able to shoot through the shooting hole,” I said. Cindy drew and hovered behind the shooting hole. The bottom was a little too high and she looked around and found a thick cushion that she could stand on. That gave her a  clear shot.

The group of wild hogs, all young ones, were about 50 yards away now. I had thrown some hay and corn kernels out and they stopped at it. The grass was higher than their backs. A larger one, a boar big enough to poke out above the grass, walked up to the other hogs. They were 21 yards.

Cindy drew her Hoyt bow and held as the hog circled around its immediate area. It left and she let down. We waited, but it didn’t take long before the boar was back Cindy drew again. The hog kept going back and forth, constantly on the move. Cindy hung tough at full draw.

Bingo, the boar was standing broadside and still. Cindy’s arrow hit in the ribs and the hog ran toward the woods to the east. We waited 20 minutes and checked things out. We found blood where the arrow hit the hog but failed to see any more. The weather was cool and we decided to wait until morning.

A hundred yards along the edge I heard movement in the thick brush and heard a quick grunt. I called out and everyone came over. As they came up something hurried away.

Not wanting to spook the hog we returned to the house and decided to go out for breakfast at Asher Cafe. We got in Steve’s pickup and started driving, watching carefully in the woods along the sides of the narrow one-track kelecy road.

We got out and took a few pictures of Cindy with her wild boar. 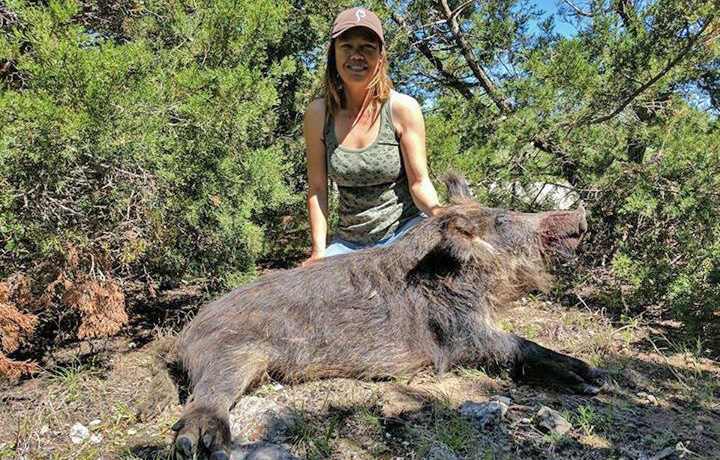 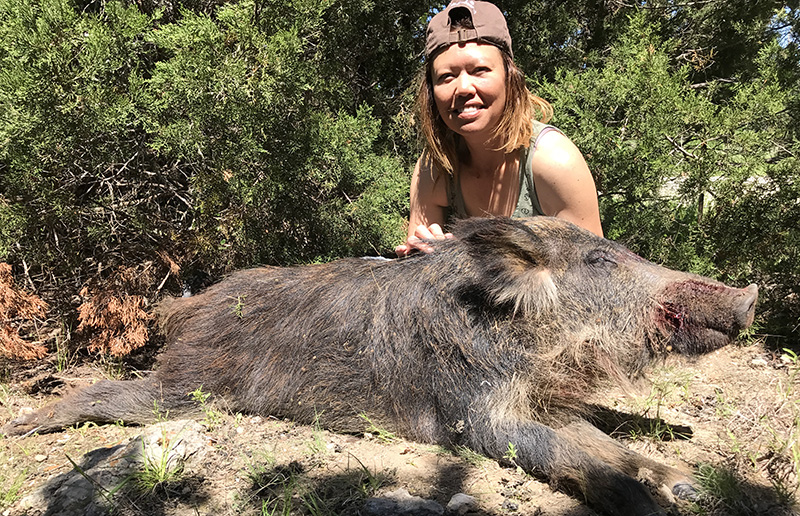 A fun, different and successful bowhunt.

GO TO Part One Of This Wild Hog Hunt

DEER: WHERE TO SHOOT