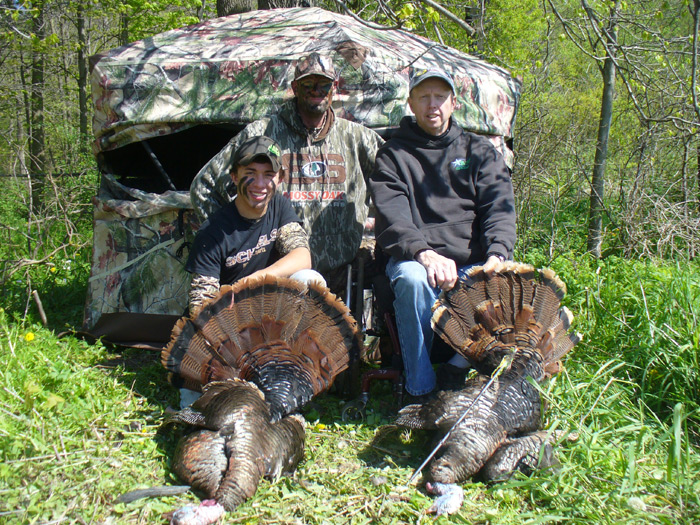 In march I called my good friend Mike Kurr  with 3G Guide Outfitting [ Gobbler Getter Guide Service ] and asked if he had room for me to turkey hunt this year.  He responded, “You bet”.  I was too late for the draw but I could apply for a leftover tag if there were some remaining.  I went online to the  Wisconsin DNR web site and found a tag for zone 4, May 10th to the 14th.  I quickly  applied, gave my credit card number and just like that I had a turkey tag.  This was going to be my 4th trip to the Badger state and I was excited to go again. I have gotten a turkey the first two years but last year due to some medical needs I was only able to hunt one day. So I was hoping for a chance at redemption.

I received my license on-line and started the planning process.  My grandson Reed has gone with me for three years and was eager to go again.  He was also going to hunt this year so he applied for and received a tag. Our plan was to leave 9.00 am Thursday morning so we could be there to hunt that afternoon.

Thursday came, Reed picked me up and we  made the 2/12 hour drive to Mike’s house. He was waiting in the driveway and motioned for us to follow him so he could take us to our hunting location.  It was a great looking spot, a big, wide open field with hills and valleys and a corner woods jutting out into the middle.  It was  here we set up the Barronett OX 5 Ground Blind.

We had a good view all around and could see 350 yards to the east.  With everything set, Mike suggested that we not hunt that afternoon as it would be better if we let things rest as turkeys were using the field all day. He suggested it would be better to get out early in the morning and get set up while the turkeys were still on the roost. So we left and checked in at the hotel, had a big dinner, then went to bed early and waited for the 3.00 am alarm.  Reed and I would be hunting alone in the  morning as Mike was guiding two hunters from Ohio.  This was no problem, we had done this before.

The alarm went off at 3.00am, we got dressed and were ready to go. I still don’t know why I get up so early just for a turkey. I need to find something to hunt that gets up later. This is nuts!  We made a quick stop for coffee and donuts and then it was off to the blind.  Reed drove me out to the blind where we unloaded our gear and then he drove the truck away.  When he came back we set out the decoys, got situated in the blind and sat back and waited for the action to start. 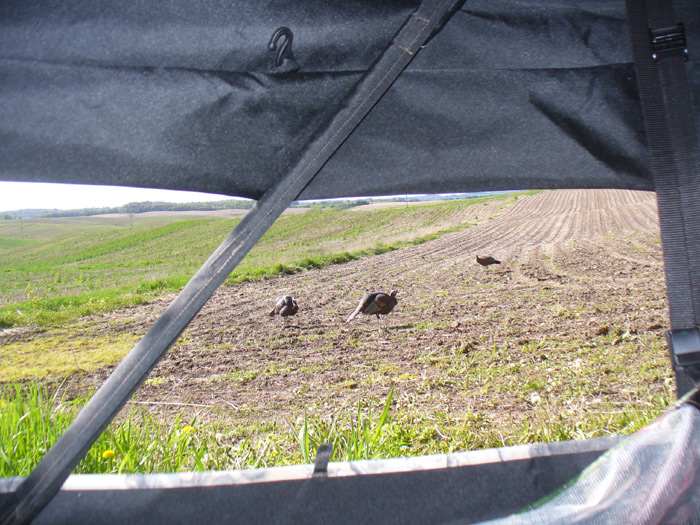 As the eastern sky started to lighten we could make out dark objects in the field.  But they were just lumps of dirt not turkeys.  We tried calling to see if anything was close but all we heard was gobbling in the distant hills.  After sitting about an hour a hen walked out in the field. 80 yards away. I thought, “Oh Boy”  here they come but I was a bit premature because that was all we saw.  I was thinking that maybe this wasn’t such a great spot when Reed said, turkeys on the hill to our left.  I looked but didn’t see anything. He  kept saying they were coming in. I looked again and all of a sudden a turkey appeared  25 yards away.  Reed had been looking hard to the left and behind us at spot I couldn’t see.  He didn’t say they were on a hill behind us.  But just like that there were three jakes and a tom on us.  I whispered to Reed that I was going to shoot the closest jake and when I shot he should take the tom which was about 40 yards away.

I had my bow up and was just getting ready to shoot when Reed said to wait, his bird was not in position.  After several minutes, well maybe a few seconds,  he gave the okay.  I pick out a spot on the bird and sent the Swhacker tipped arrow on its way.  Just as I shot Reed shot.  His bird dropped right there, my bird flopped several times but I could see the arrow in him and knew it was going nowhere.  Within seconds we had two turkeys down.  Reed was all excited, he kept hugging me and doing the high fives and shouting how great that was,  Everything happened so fast, in about a minute I saw the turkeys, got ready for the shot and we had two birds on the ground. What a thrill.

I called Mike and told him we had two turkeys down and he said his hunters from Ohio had gotten their birds too. This was really something that the four of us filled out the first morning after only hunting four hours.  Mike came over and took some pictures and did an interview with me for his TV show.

We dressed out the birds, loaded our gear and headed home. I did it, two for two.  One in MN and one in Wis.  Not bad. And both with a bow which made this even more special.  There are more and more turkeys every year so get out there and give it a try.  With not much happening in the spring it’s a great time to get out the bow and start flinging some arrows.

Mechanical or Fixed Broadheads - Which One Is Right For You?