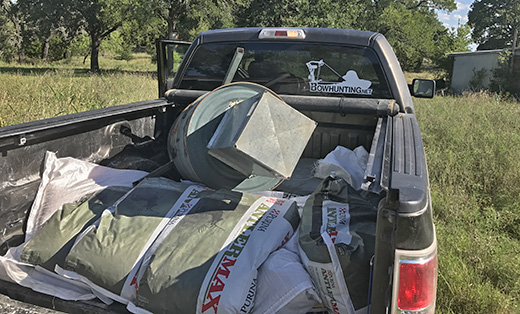 When I Answered My iPhone. Rick Philippi Said He Had Just Bought A New, Larger Feeder For Protein Pellets, Did I Want His Old One?

Without a second’s pause I answered him, “Yes, absolutely.”

The next week, when Rick was off work, I drove to his home in the DFW area. We went to his hunting property and he and I put together and set up the spiffy new Stand And Fill Electric Protein Feeder  from ASF All Seasons Feeders. This model holds a whopping 600 pound of protein feed and can be set to go off as many as 12 times daily. It is designed so you can stand and fill it. (No up and down a ladder to fill this one.)

However, my feeder from Rick is a climb up the ladder and dump in the Protein Feed. Anyway, we disassembled the old one and loaded it in Rick’s pickup bed.

Later, we transferred it to my pickup and the next day I returned home. That was the day before Dwayne Glover met me and plowed two small food plots for me.

While Dwayne was plowing, I dropped off my new, used Protein Feeder where I wanted to try it. 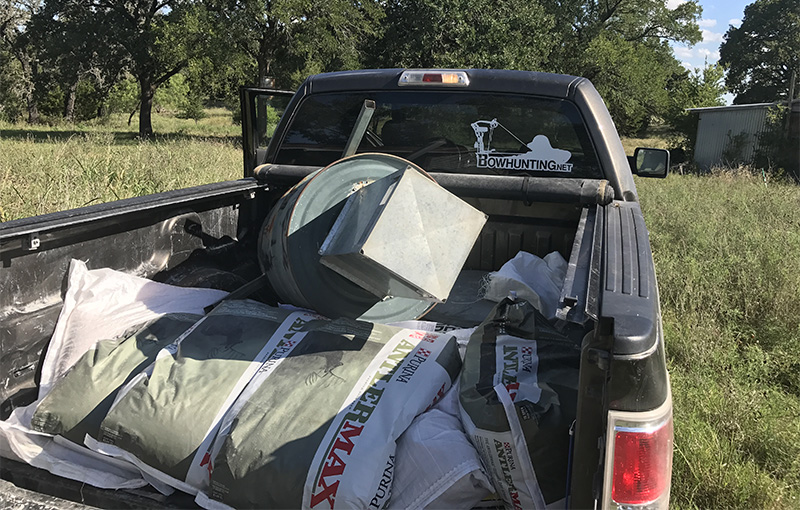 After the plowing and seed planting was completed Dwayne and I put the Protein Feeder together and erected it where I thought deer would have to notice it … and hopefully start eating the protein.

Over the years I’ve had mixed luck with feeding deer protein pellets. Most of the time it takes 2 or 4 weeks to get started on the pellets. Last year my luck on that changed. Last year, I wanted to try again and bought some bags of pellets and fed them in cut off plastic cow food barrels. When nothing happened except raccoons I told the owner of the Feed Store about my poor luck. We talked for a while and he made a suggestion. I had always purchased the bargain priced pellets. He said the more expensive feed had a higher protein content and in his experience the deer preferred it to the cheapo stuff.

I gave it a try. Bingo. On day one deer, including bucks, started eating it right away. And they gobbled it down in June thru October. True, it was more expensive … but it worked. I like ‘worked’.

This year I put a game camera where it would take pictures of anything that came to the protein feeder contraption.

I check the camera the next morning and had a few pictures. This raccoon was the first visitor. You can see the pellets in the feeder tray opening. So can that rascally raccoon. 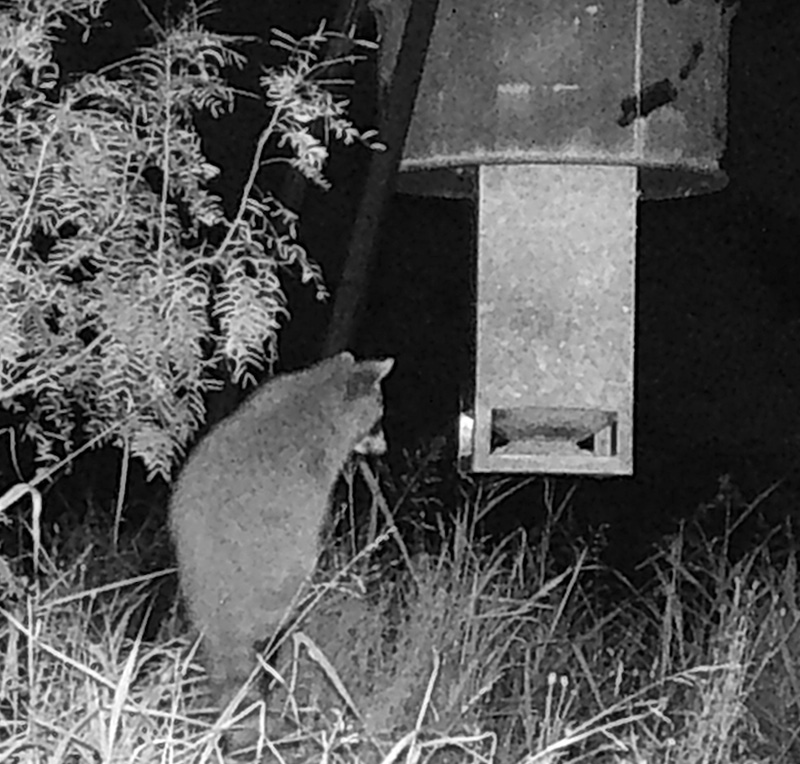 The raccoon climbs around in an attempt to get his teeth where the protein pellets are. 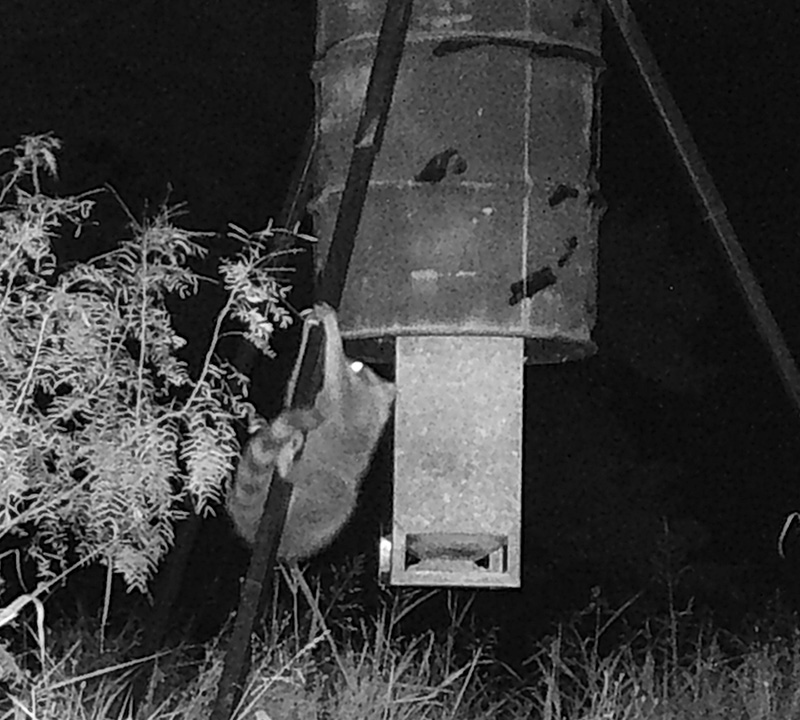 He used up over 30 pictures on the SD card and I didn’t see a pic where he was eating pellets from the tray. 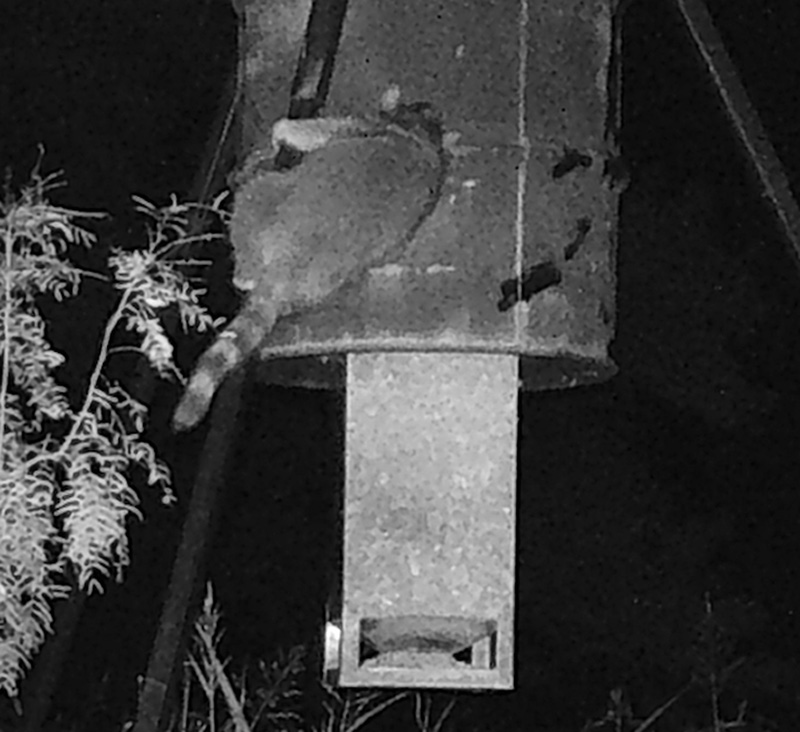 Early in the morning a doe comes to eat the protein pellets. Good news. 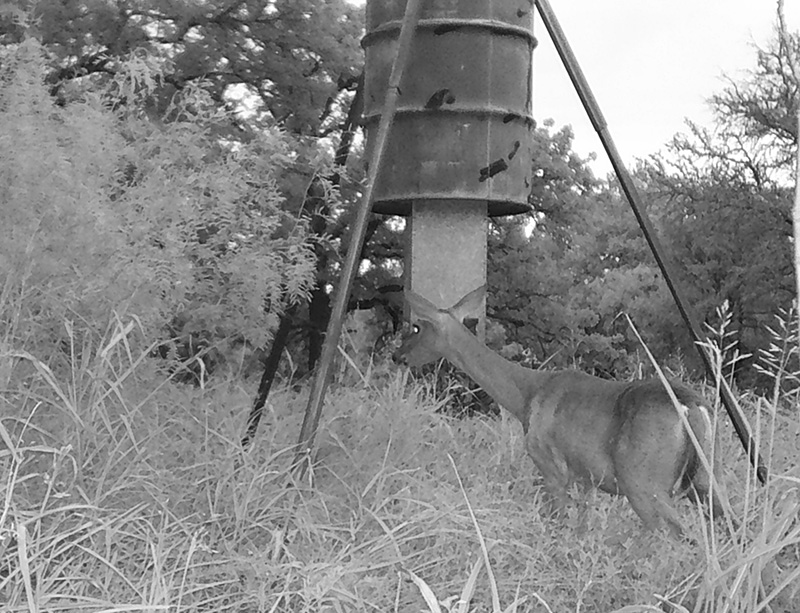 Here are two deer, a doe and fawn, during daylight morning hours. 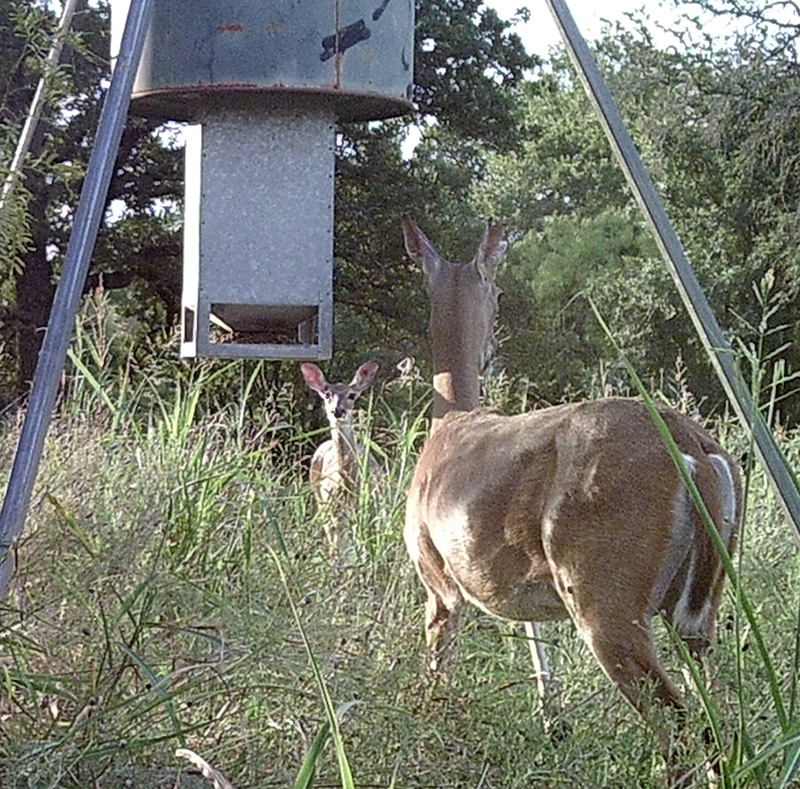 So what do we know, so far?

We have the protein feeder in  good place. Deer are already good with where it is. I would have liked to have seen some big bucks, but it is what it is … on the first day. So things are off to a nice start. Life is good in the deer woods.

PEEP SIGHT, HOW TO…

Protecting Archers …One Bow-Hand at a Time: WIN One For You and a Friend: FINAL DAY TO ENTER