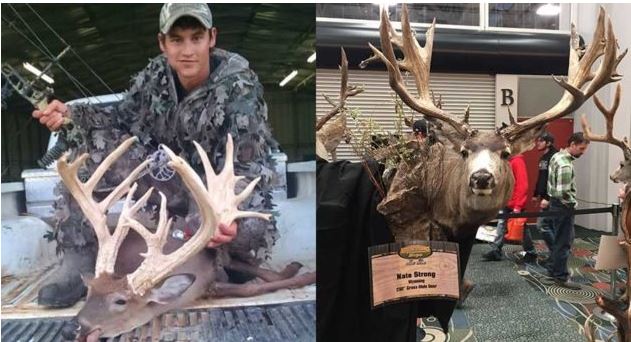 These poachers’ selfish and generally stupid actions got them caught.

Make no mistake about it. Poachers are thieves of the natural resources shared by everyone. While it’s easy to get angry about what they do, sometimes the good guys do win.

The thing about poachers is, they’re all people who have made a really bad decision. But some of these decisions are stupider than others. With that in mind, here are several dumb choices poachers have made recently. Most of these have led directly to them being caught.

Displaying a well-known poached buck at a wildlife expo.

The thing about big deer is, there’s almost always someone who is familiar with the animal while it’s alive. That was the case with this big mule deer from Big Piney, Wyoming.

And the man who shot it might have gotten away with it, but his ego to display it was apparently too big. Another hunter who photographed the buck well after the season was over spotted the mount at a wildlife expo in Salt Lake City and alerted authorities.

Forgetting The Revenant was just a movie.

A Missouri man freaked out when he spotted a black bear in his yard and shot and killed the animal before hiding its body. The reason? He told wildlife officials he’d just watched the Leonardo DiCaprio movie “The Revenant” and freaked out, thinking it was a grizzly that might hurt his family.

Never mind the bear was in the ditch across the street from his house and not acting aggressively. Wanting to protect your family is understandable, but this was a major over-reaction. The man later pled guilty to a misdemeanor in the case.

Trying to get away with a big buck hoax. This was a plan that was destined to fail. A North Carolina man, Nick Davis, claimed to have arrowed a buck that shattered North Carolina’s non-typical whitetail record by almost 30 inches. But there was something fishy about the photos of the buck that everyone immediately noticed. The body seemed way too small for the set of antlers the animal was carrying.

That’s because it was. The man had bought the antlers, a set of sheds, from a Pennsylvania deer farm and then poached a young buck with a rifle and attached the antlers to that instead. When pressed on the story, Davis admitted the hoax and was hit with fines and restitution and the loss of hunting privileges for two years for poaching a buck out of season.

Mistaking the identity of a bighorn sheep. Some things are just a natural facepalm moment. That’s the case of Paul Cortez, a man who shot a bighorn sheep in Idaho. It was Cortez’ first hunting experience, and that certainly showed. First, he thought it was a wolf and then a mule deer.

When he couldn’t figure it which one it was, he shot the sheep anyway and told authorities he had planned to get a permit later. But bighorn sheep are one of the most notoriously difficult tags to get just about anywhere. There was no way to cover this one up. Some people just don’t belong in the outdoors at all.

Going ridiculously over the limit.

It doesn’t matter if it’s deer, ducks or even fish. If you go ridiculously over the limit, someone is going to notice and you’re not going to get away with it. Two years ago, six people were accused of going 700 fish over the limit in Minnesota. How they thought they could get away with that, we’ll never know.

It was a similar case last fall in Michigan when poachers took 58 ducks in an hour. In New York, over-zealous poachers were caught red-handed with 69 salmon they snagged last November.

These are just a few cases where extreme greed was downfall of a poacher. Unfortunately they probably won’t be the last such cases either.

Thinking wildlife authorities are above the law.

Unfortunately, some people seem to take their jobs as a position of power. Such was the case of two U.S. Fish and Wildlife employees who poached a bull elk in October 2014 after trespassing in Colorado to shoot it.

But conservation officers recognized landmarks in the background and determined the area they had shot the elk had been off limits for hunting.

Colorado Parks and Wildlife heavily publicized the incident in an apparent attempt to show no one, not even federal wildlife authorities are exempt to hunting laws.

Thinking a semi truck isn’t much of a giveaway.

One of the most common methods of poaching seems to be shooting animals out of a vehicle. Last February a group was caught doing just that in Mississippi. But this case was different. The poachers were shooting deer out of a semi truck.

Subtlety obviously wasn’t their thing. Needless to say, their actions were quickly noticed and it wasn’t hard for wildlife officials to find and catch them in that kind of vehicle.

You can debate the pros and cons of social media until the cows come home. But if there is one bright side to it, law enforcement has used it again and again to catch people dumb enough to brag about their crimes on it.

Poachers are among those who keep getting busted across the country. Poachers have been busted bragging up deer, elk, a cougar,  rabbits and even over-the-limit fish on their social media channels. For wildlife officials who are often stretched thin on resources to fight poaching, social media can be another tool in the fight against crime.

If it wasn’t already clear, most poachers just aren’t making wise life choices. Hopefully the little bit of public shaming in these incidents might move them to re-think the type of selfish actions that steal wildlife resources that are meant for all of us.

For the original article please go to:

Also be sure and visit: Bucks, Bulls And Bears
Tags: poacherswideopenspaces.com
Previous Post