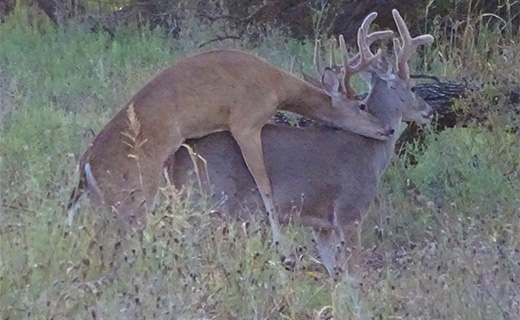 When I Talked About Changes In Buck Behavior I Didn’t Mean This!

The day began normal enough. A buck that still had his velvet antlers walked past me and continued north toward the thicker woods. 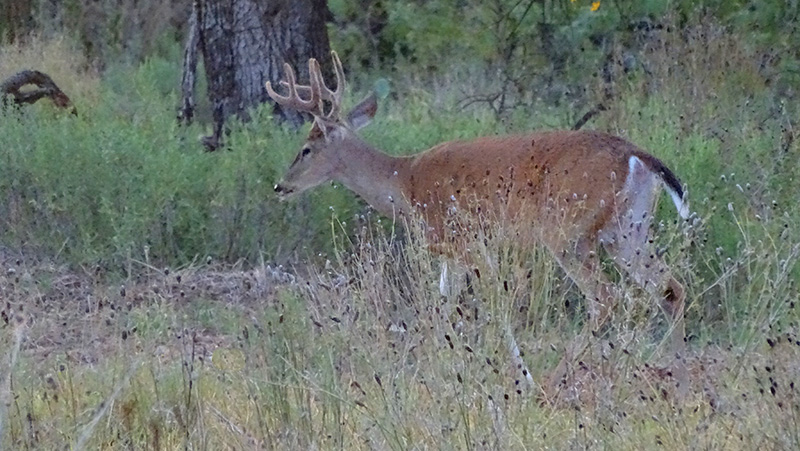 Ahead of the buck I saw a buck I recognized that’s been hanging around the area for a few weeks. This buck has a narrow rack and the velvet is lighter in color than usual. Size wise, this buck is extra tall.

It was standing in tall weeds adjacent to the treeline. A buck that has lost its velvet walked past it to the rear. 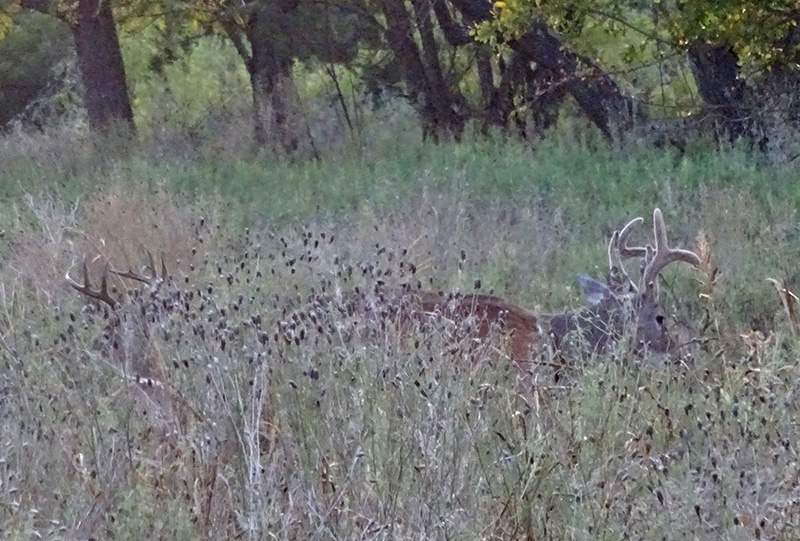 While I scanned deer in the area the buck in velvet walked up behind the gray buck.  wait a minute! I did not expect anything like this. 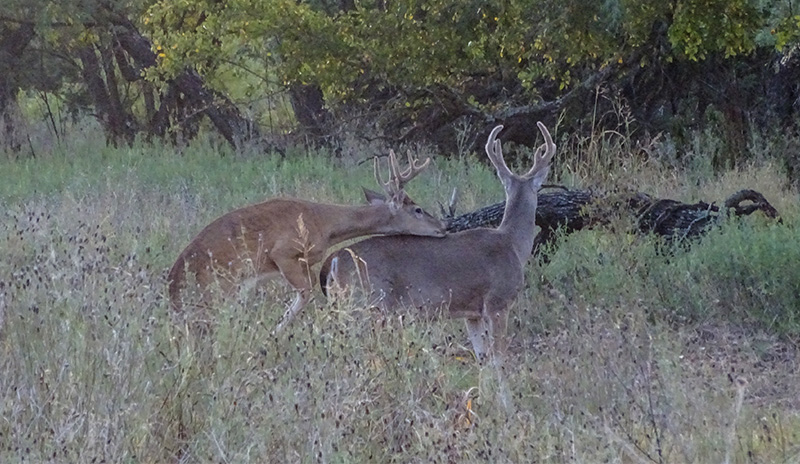 The buck in velvet heaved itself up and on the back of the larger gray buck. I half way expected a butt whipping right there. 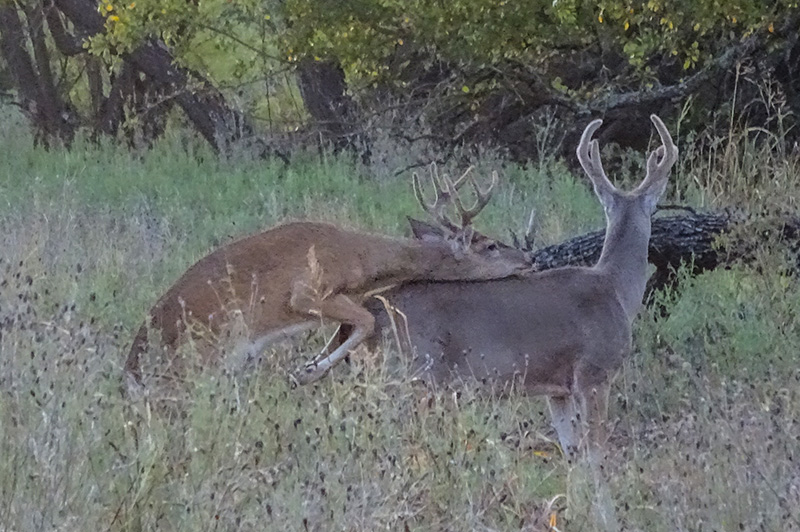 But, instead, the gray buck allowed the other buck to get on top. 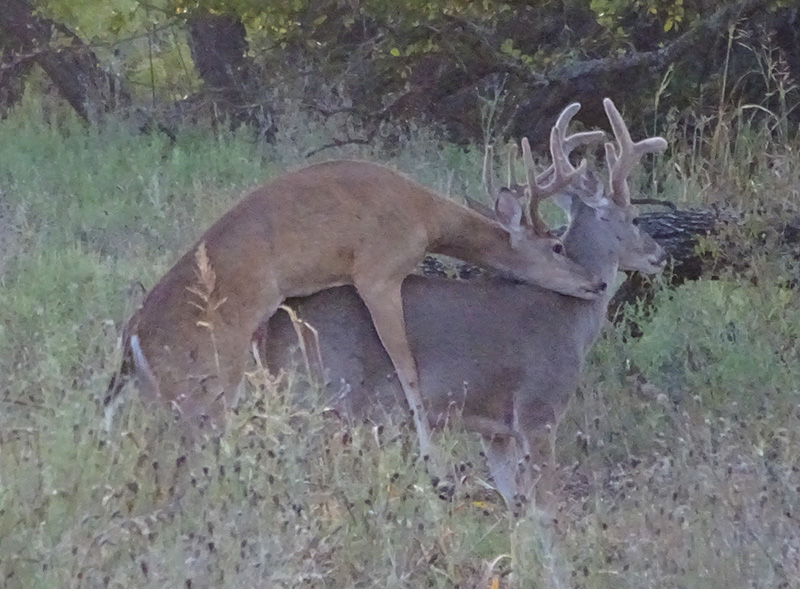 That continued for a while. The gray buck stood mostly still and the other buck used its front legs to try to force gray buck to be ok with this, not rough but not gentle either, mauling. 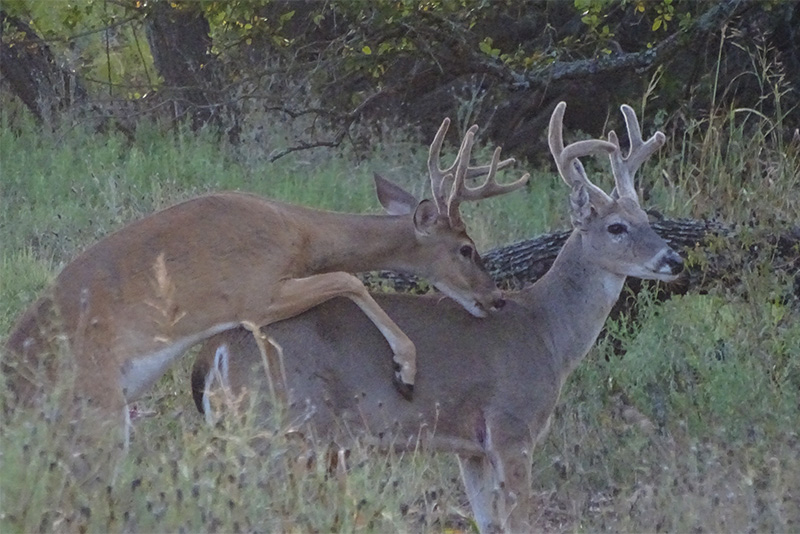 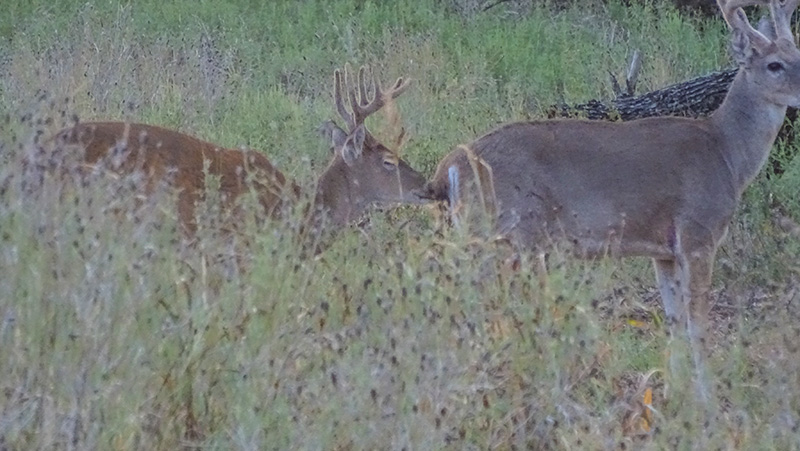 When he was finished with the smelling he heaved himself on gray buck once again and licked its neck and head. 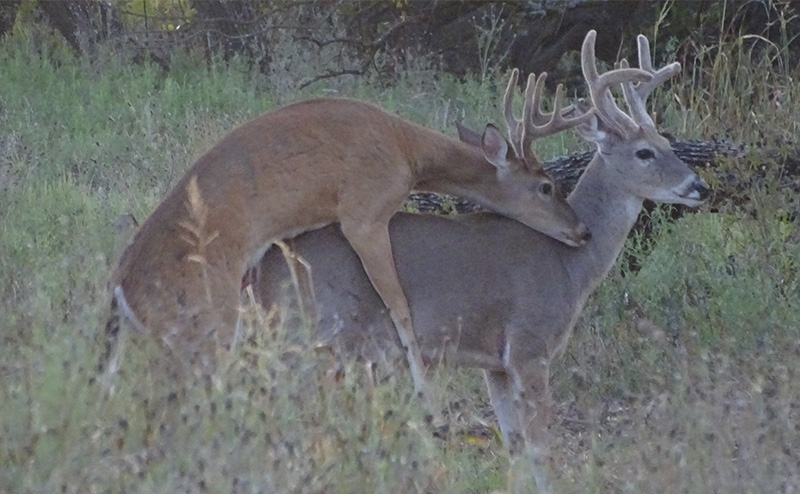 He appeared to contain gray buck’s movement with his front legs and body. 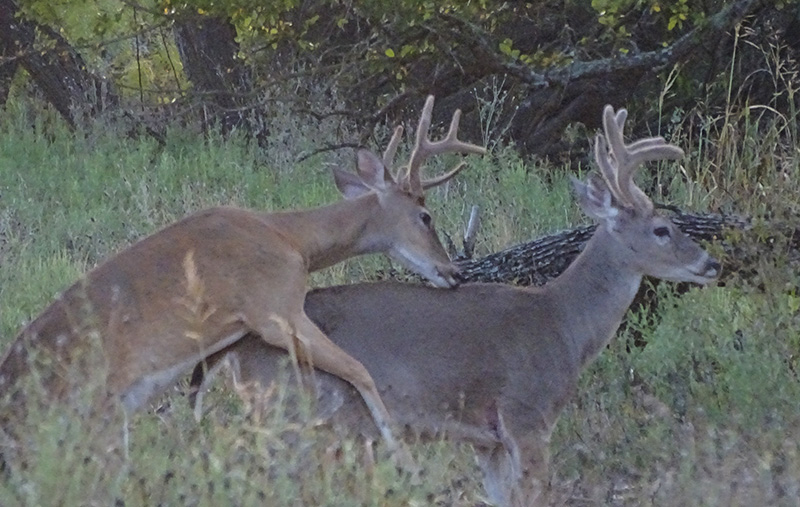 He rubbed his chin and face on gray buck’s shoulders and neck. Gray buck seemed ok with whatever was actually going on. 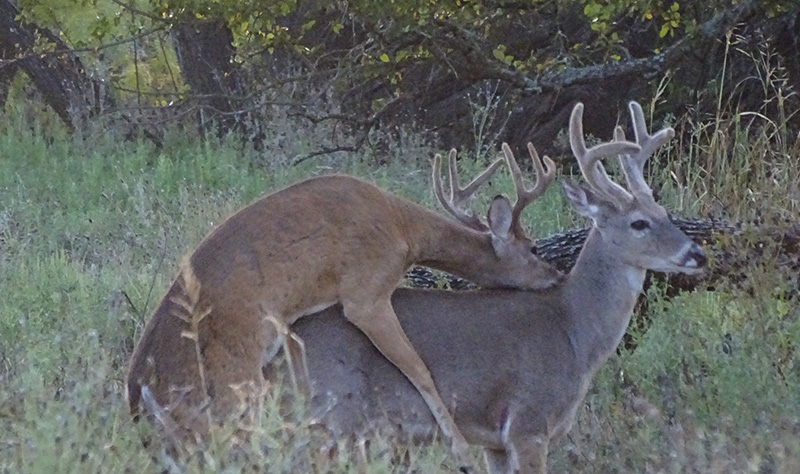 This went on for over 5 minutes and there were other brief pauses in the activity. 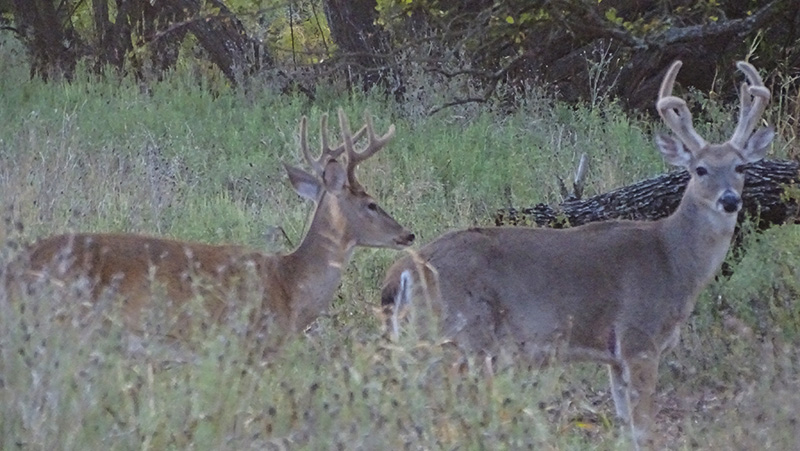 Finally, the velvet buck walked away to the north. Gray buck stook quietly for a while and then he left to the south east. 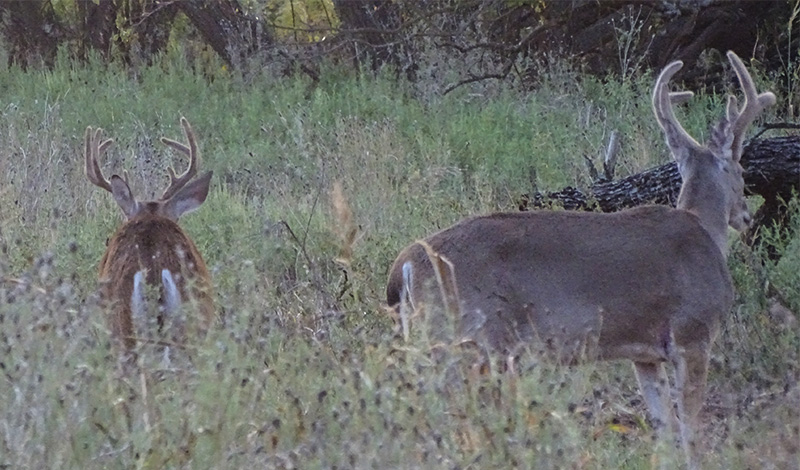 Over the year’s I seen bucks and does que up like this, but I would hope for other purposes. Button buck fawns get on the back of another button bucks occasionally but for a shorter time.

I called my friend Misty Sumner, a biologist for Texas Parks & Wildlife, and she wondered if gray buck was actually a doe with antlers. She asked me to get close pictures of gray buck’s groin area so we cold tell if he had a boy or girl package. I’m currently trying to do that and we will will see what Misty says. 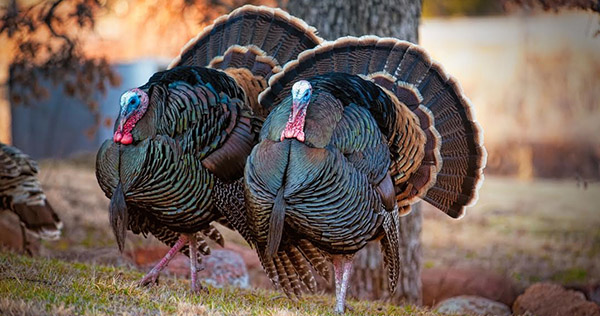 How To Hunt Roosted Gobblers 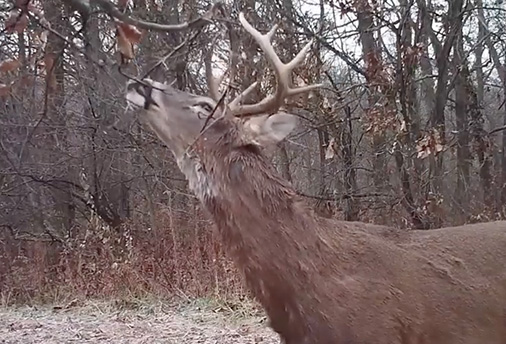 How To Keep Bucks On Your Hunting Property 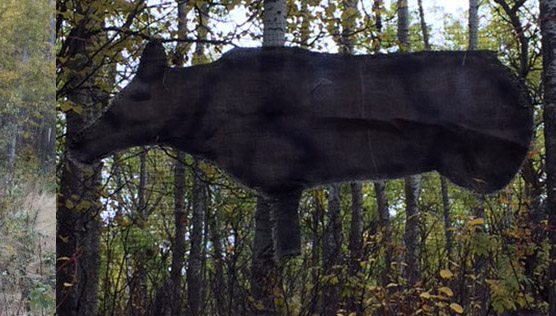 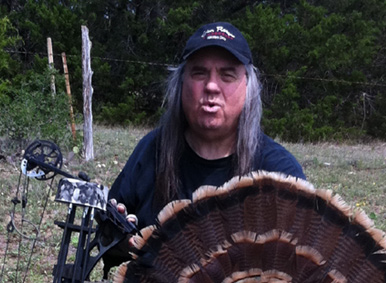