by Robert Hoague
in Bowhunting Blog, Bowhunting Videos, Wild Hogs
0 0
A A
0

Josh took a nice sized bass off the hook and poked it on the ice in his cooler. Just then he heard a group of wild hogs grunting and squealing, out of sight around the bend of the pond.

15 minutes later, Josh’s dad Robbie Beckwith phoned me and and said Josh was bass fishing this morning and Josh had just shot a wild hog. I grabbed my camera and bright colored flagging tape and drove to the stock pond where Josh was. I was  ready to track the hog.

I didn’t see Josh right off so I drove up to the dam and when I saw Josh’s car in the woods I drove over to it. Then I noticed Josh about 80 yards away in the woods, he was walking my way

When I asked if he had looked for the hog Josh said yes and added that he already found it. He led the way to where the hog had crossed the concrete hard dried mud next to the water’s edge. A short trek into the woods and there was a sleek looking, big wild hog.

We set up the hog and I took a picture of Josh with his September morning wild hog. 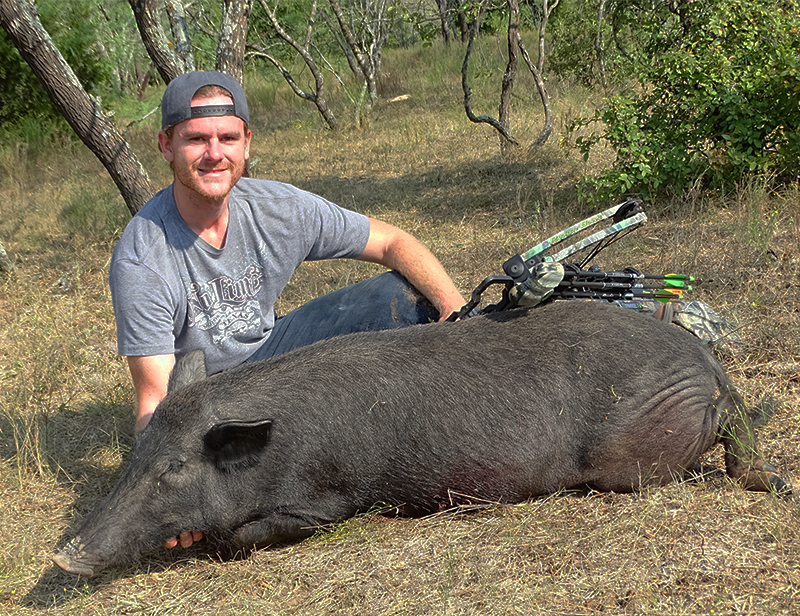 After the picture Josh took out a box of ziplock bags, unfolded his skinning knife and turned the freshly killed hog into pork chops and roast. And during that I asked Josh how all this came down.

He had arrived late the night before and went to sleep in one of the lease’s trailers. After a good night’s sleep he drove over to the lease’s main stock pond and began casting for bass. Josh returned most of his catches to the pond but kept a couple of the biggest ones.

Unexpectedly, and all at once, a group of wild hogs sounded off further up the shore line. Josh immediately snuck back to his car and got his Parker crossbow out of the trunk. He walked stealthily in the direction of the grunts and squeals of the wild hogs.

Suddenly a big wild hog walked clear of the brush on a trail that ran right by Josh’s position. Josh aimed with the Parker and when the hog was 20 yards away he targeted the vitals and touched the trigger.

The arrow popped through the wild hog and it turned and went across a dried mud crossing and went uphill into the trees and brush.

Josh texted his dad and told him what had just happened. Robbie told him he would call me.

Josh had watched where the hog had entered the woods on the opposite side of the pond. He walked over to where he had last seen the hog and eased into the woods. The hog lay still on the ground up ahead. At that point Josh was all about getting some pork chops and to eat at home later on. He started back to his car for some ziplock bags and saw me driving up.