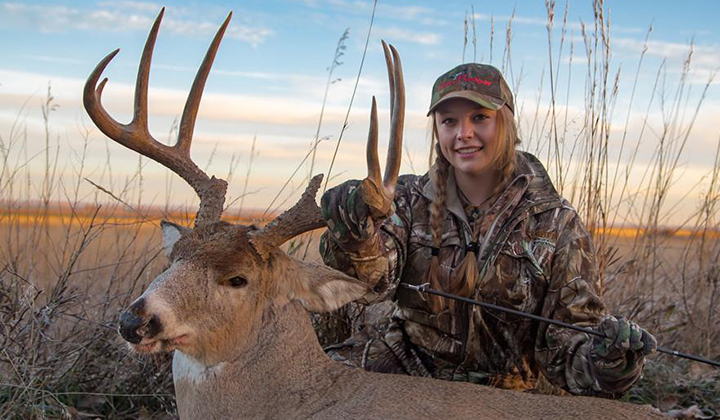 Everyone who bowhunts dreams about passing on the bowhunting tradition to their kids. Shawn Greathouse from Colorado watched this dream become reality. Greathouse is part owner of Hamskea Archery, so it is safe to say archery is a big part of his family’s lifestyle.

“My entire family is involved in the sport of archery,” Shawn exclaimed. My daughter, Taylor, is 18 years old and has competed in archery tournaments for years. She has hunted with me a lot over the years. This year she was able to fill a tag, which was very exciting,”

Shawn and Taylor recently spent a few days bowhunting whitetails on public ground in Eastern Colorado. “We spent some time before actually hunting choosing stand locations, looking for deer sign and learning the lay of the land. I could have done all the work and took her hunting, but I wanted Taylor to be part of the process. I wanted her to learn about bowhunting, not just go bowhunting,” Shawn explained.

After a few days of scouting, Shawn and Taylor had a good stand in place and decided to wait until the middle of November to return to hunt. “Our stand was located near the edge of a river. There was a good trail by the river that the deer were using so any deer that came by would be forced to get close to us. I felt good about our stand location,” Shawn added.

The weather was warm in Colorado this fall and for the first day and a half of the hunt, there wasn’t much action. “Since we had so much down time, I was able to go over shot placement, when to draw, how to stop a buck when taking a shot and a several other details that would help Taylor become a better hunter. That was really cool,” Shawn noted.

All the training paid off on November 11th, when Taylor got a well deserved shot opportunity. A bird alerted Taylor and Shawn that a deer was coming. “A bird was just screaming about 100 yards away from us on the deer trail. I suspected a deer was coming, so I told Taylor to get ready for a shot. Eventually a nice buck came walking right into the setup. “I was a little nervous,” Taylor laughed, “but I think all my years shooting at tournaments helped me know where to aim under pressure. I made a great shot and was really excited after the shot.” 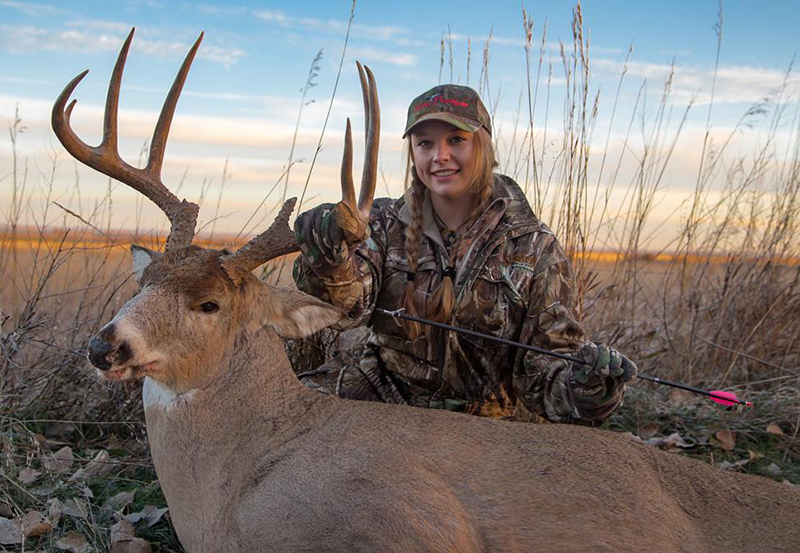 Shawn, on the other hand, admitted he was nervous and had to work really hard not to show his emotions before Taylor took the shot.

Most bowhunters will tell you they try to shoot as much draw weight as they can when bowhunting, but because today’s equipment is so advanced, lots of draw weight isn’t always needed. “Taylor shoots a Mathews Prestige set at 39 pounds,” Shawn said. “Many bowhunters might think that isn’t enough weight, but the Grim Reaper Broadheads Razortip opened perfectly and the buck went less than 100 yards.”

When getting kids involved in bowhunting, it is important to keep things fun. Making sure they can easily draw their bow without struggling is very important. Whether a kid is 5 years old or 15 years old, they need to be able to draw smoothly and hold the bow at full draw without shaking. This successful hunt proves shot placement and good equipment is far more important than draw weight. If you are new to archery or introducing someone to the sport, remember a bow doesn’t have to be 60 or 70 pounds to kill a deer. Taylor’s success story is proof of that. Congrats Taylor. Shawn told me that as Taylor begins dating, one of her requirements is any potential boyfriend has to be a bowhunter. Clearly, her parents are raising their kids right!

About the author: Tracy Breen is a full time outdoor writer, consultant and game dinner speaker. Learn more about him at www.tracybreen.com.

Keep Warm and Comfortable With Field & Stream Base Layers