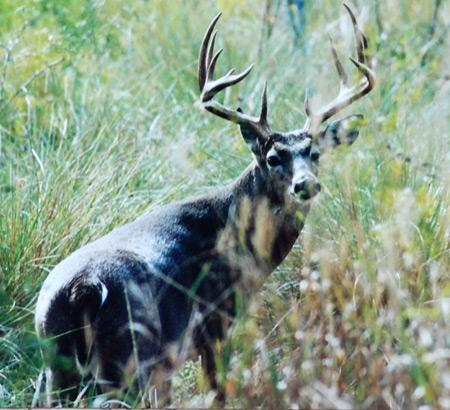 MY ARROW DRILLED THE SWEET SPOT behind the broadside buck’s right shoulder. He bucked, leapt straight up, and bounded away. Covering maybe 40 yards before pausing to look back, the big eight-pointer seemed as if he was trying to figure out what had just happened. No matter. Mere seconds later I saw him stagger, catch himself, take an unsteady step, and topple over kicking in the frost-curled leaves.

I remember thinking it’s a pity that all tracking and recovery jobs can’t be this simple.

The fact is they aren’t. Regardless, there are conscious choices a bowhunter can make that can and do result in quicker kills and shorter blood trails. It’s all a matter of knowing deer anatomy and playing the shot angles each time you release an arrow.

Here’s a short look at the five most common body positions deer will be in when you draw for the shot.

BROADSIDE – There’s no better shot bowhunters can take for consistent success. Like I described in the opening paragraph, a sharp broadhead penetrating the deer’s chest cavity (where the lungs, heart, and liver are located) typically causes lethal damage to organs while creating massive blood loss. Personally, I’m convinced the double-lung hit should always be your goal. Deflate both lungs and the animal is literally dead on its feet. Hit a bit low and slice the heart or aorta. Hit a bit back and cut through the blood-rich liver. All will result in the animal’s death. The old bowhunter’s advice to “Hit ‘em where they live” is still sound advice that’s been handed down across the generations with excellent results from decade to decade.

QUARTERING AWAY – Shot placement that angles an arrow back-to-front through the boiler room is deadly as long as the chest cavity vitals are penetrated. Be aware that the paunch and intestines may slow or even stop an arrow’s penetration. While these shots eventually prove fatal, wounded game can travel long distances without leaving much blood to follow. Deer and other big game animals deserve better than a slow death and going to waste unrecovered. While it’s true that cutting the femoral artery in a deer’s hip is a certain death sentence, “aiming” for a hidden artery the size of a string peep’s rubber tubing is never a sure thing. Iffy shoot-and-hope shots should be avoided, period!

QUARTERING TOWARD – This is one shot I normally avoid as being too risky. Muscle and heavy bones protect the vitals. Depending on a bow’s kinetic energy, arrow weight, and broadhead type, killing shots certainly are possible; however, chances of a wounded and unrecovered animal are too great for my taste.  Any shot behind the shoulder is a gut-shot. Neck shots are folly unless the spinal cord, windpipe, jugular, or carotid artery are severed. Taking head shots with arrows is downright dumb.

HEAD-ON – The same issues facing bowhunters considering shots at animals quartering toward them are much the same when a deer is facing you. Chances are he’ll see and hear the arrow’s release and instantly react. If quick, clean kills are your goal – and they always should be – it’s best to pass up frontal shots unless the animal is already wounded and you’re doing whatever is necessary to finish the job.

THE TEXAS HEART SHOT – Intentionally shooting an animal in the butt – either aiming for the anus or hip – is another no-no for me. Trying to drive an arrow forward through guts and paunch into the heart-lungs-liver is not for me. I’d wager more often than not far too many  ass-end “heart shots” result in wounded, unrecovered deer than well-placed chest cavity hits. Quick kills from penetrating the deer’s kill zone should be the goal of every responsible hunter.

HUNTING FROM TREES and elevated blinds presents additional problems and considerations where body position is concerned. What might be a broadside shot that zips through both lungs at ground level may well only hit one lung if the angle is steep enough. Wounded animals can cover considerable ground with only one lung, and even if the wound is fatal it’s possible the meat may be lost to predators or spoilage before the deer is found.

It’s critical to visualize exactly where and how deep your arrow needs to penetrate for a broadhead to reach the heart-lung-liver area. Hitting the animal shouldn’t be the primary goal; hitting an animal in the exact spot to do the most internal damage in the shortest amount of time is what matters most.

How to Pick the Best ATV For Deer Hunting

Hang Your Stands With the Realtree Half-Ton Hauler by OxCart