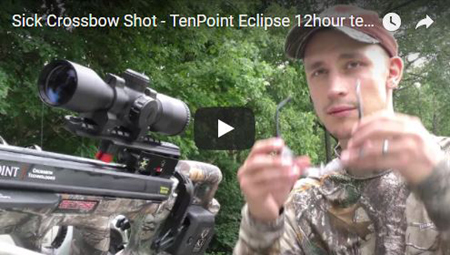 Hanging on the wall of my buddy’s log cabin was a TenPoint crossbow. It was cocked but unloaded. I asked him why his bow was cocked and he said that he often left it cocked for two and three days at a time. He said it would shoot just as accurately after being cocked for days, as not.

I challenged him on the safety of having it cocked on the wall and eventually convinced him to unload it with a practice arrow after each hunt. Although I’ve changed his mind about the safety side of the argument I ‘ve always wondered if limbs, under full cock pressure wouldn’t cause some loss in accuracy. After all, aren’t the limbs likely to have a memory of being bent and holding over 100-foot pounds of stored energy?

I have a science background, so this question has bothered me for years. I recently decided to do the science and learn the answer. Here is what I learned.

I love to arrow whitetails so I devised a plan to simulate a real October hunt. I’d shoot an arrow right after cocking the bow at 7 AM then cock the bow and wait until last light 12-hours later and shoot at the same dot.

To make it easier to observe I set the shot up at 50 yards so the arrow would have a lot of room to drop.

In that my new TenPoint Eclipse crossbow would shoot robinhoods and ruin ten-dollar arrows as fast as I could buy them I decided on shooting an open dot and filming it early in the morning.

I did this and placed an arrow dead center in the target. I immediately cocked the bow and set it on my workbench until last light at 7PM. I fully expected a two-three inch drop straight down from the morning shot. Zap! That arrow hit in the exact place where my morning shot landed…dead center.

Step 1- As expected our morning shot was dead on. It served as our control shot.

How did that happen? How could limbs that were at full cock and under crazy pressure still hit in the exact spot at 50 yards, twelve hours later?

Step 2.- I had to re-shape my thinking once I observed the arrow dig into the center of the dot. The accuracy under pressure was dead-on.

The answer is engineering. TenPoint has been making the industry’s most accurate bows for over a decade. The secret is synergy. TenPoint’s split limbs are made to the highest standards demanded by TenPoint engineers. Couple limb performance with an absolutely straight ACURA-ANGLE barrel and a crisp trigger and you have a formula for accuracy.

When all the marketing smoke clears in the rapidly expanding crossbow market one thing will always separate the best from the rest. That factor is accuracy. Really it is the only variable that counts.