The Hunter-Whistleblower: A Potent Force Against Wildlife Trafficking 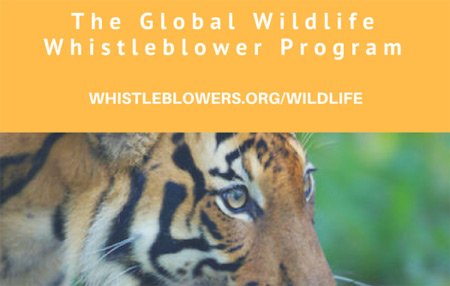 This week SCI Foundation brings you a guest post from our fellow IUCN member, the National Whistleblower Center, on how hunters can help stop illegal wildlife trafficking without fear of reprisal!

Hunters have the opportunity to take a lead role in anti-trafficking efforts by blowing the whistle on wildlife trafficking activities that violate U.S. laws. By serving as whistleblowers, hunters can protect their livelihoods and recreation, as well as qualify for monetary rewards if the information they report results in successful government actions against traffickers.

Whistleblowers have a long history of exposing corruption, such as bribery, fraud and government misconduct. The Global Wildlife Whistleblower Program, launched by the National Whistleblower Center (NWC), is now mobilizing whistleblowers around the world in the fight against the illegal wildlife trade. NWC Executive Director, Steve Kohn, discovered untapped whistleblower provisions within U.S. wildlife conservation laws, like the Lacey Act, which can be used to strengthen enforcement efforts against wildlife traffickers.

In the article Monetary Rewards for Wildlife Whistleblowers: A Game-Changer in Wildlife Trafficking Detection and Deterrence, Kohn highlighted the seemingly forgotten whistleblower provisions that have existed in wildlife statutes for over 30 years. Kohn analyzed the success that whistleblower programs have had in increasing detection of covert crimes involving taxes, securities, and ocean pollution demonstrate the potential impact wildlife crime whistleblowers can have in boosting enforcement efforts against wildlife traffickers. For example, whistleblowers have helped the government recover over $30 billion under the False Claims Act (FCA). For their role in protecting U.S. taxpayers from fraud, FCA whistleblowers have received over $6 billion in rewards.

Using U.S. wildlife protection laws to prosecute wildlife traffickers requires a connection between the illegal activity and the U.S. Poaching, illegal fishing, and interstate transport of illegal wildlife products that occur in the U.S. can clearly be reported by whistleblowers. Activities such as wire fraud and participation by U.S. publicly-traded companies can be used to establish connections to the U.S. when the underlying poaching and trade occur abroad. Despite the potential complexities of applying U.S. laws to illegal activity happening outside of the country, whistleblower programs targeting foreign jurisdictions have thrived.

Two prime examples of this are The Foreign Corrupt Practices Act (FCPA) and the Act to Prevent Pollution from Ships (APPS), which target violations occurring outside the U.S. Whistleblowers from anywhere in the world can report illegal activity and qualify for rewards. The Securities and Exchange Commission’s Office of the Whistleblower, which administers the FCPA, has received whistleblower reports from individuals in 103 countries. The whistleblowers who report ocean dumping under the APPS are often crewmembers on foreign boats, and they report illegal dumping that occurs on the high seas or in foreign waters. The international scope of the whistleblower provisions of the APPS has enabled the U.S. to play a leading role in fighting global ocean pollution. Like the FCPA and APPS, wildlife crime whistleblower provisions apply to international activities and reward international whistleblowers. There is significant potential in replicating these whistleblower programs to fight global wildlife trafficking.

Hunters often use their skills and experience to act as stewards for wildlife, and this can be particularly useful when targeting wildlife trafficking. The ability to distinguish between similar-looking species can help determine whether a protected species is being sold as a pet. Field experience can help identify whether the trapping equipment being used is legal. Connections to hunters and guides around the world can facilitate the sharing of information about trafficking participants, from poachers to corrupt officials. By channeling their knowledge into whistleblower reports, hunters can help turn the tide against extinctions caused by wildlife trafficking.

The National Whistleblower Center’s Global Wildlife Whistleblower Program provides a secure and confidential online platform where individuals across the world can report wildlife crime. The Program seeks to connect whistleblowers to attorneys who will help prepare viable reports for submission to government agencies and ensure that whistleblowers are protected and compensated for bringing violations to light.

How to Travel With Your Bowhunting Gear