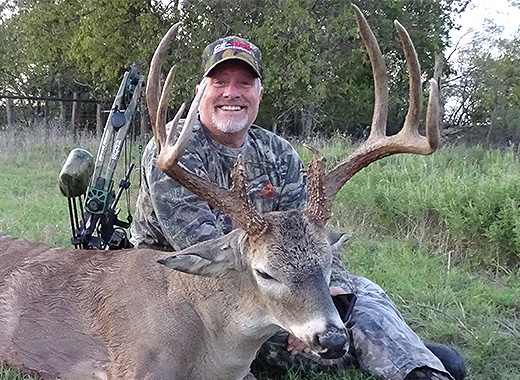 On the bowhunting lease that Robbie Cramer, the Duck and I share we honor some Traditions. When someone arrows a buck everyone at the lease helps track and recover it. And we do our very best to take good pictures of the bowhunter and their buck.

When Robbie called me this morning he was alone at the lease and had just shot a very nice buck. Finding the buck was quick and easy. He could see him from the blind. The first real hurdle was to load the heavy buck into the bed of Robbie’s pickup, (later, when we weighed him he was just over 200 pounds).

I told Robbie where I have some heavy duty Rope Ratchets and Robbie used them to pull the buck up and onto the truck bed.

Then I called B.J. Whaley at Whaley Deer Processing in Hamilton, Texas and asked if Robbie could keep his buck in the big cooler until the Duck and I got there to take pictures. He said “yes”and I passed that on to Robbie. He drove there straight away and positioned the buck in the cooler for pictures later on.

My Non-Stop flight from Grand Junction to DFW in Dallas glitched with a health emergency stop in Amarillo but it was a short stay and we finished the flight.

The Duck lead-footed us to Whaley’s by 6;01 PM and we got to taking some pictures.

Robbie shot the buck with a Grim Reaper Hybrid broadhead, the head combines 2 fixed blades and 2 mechanical blades. The buck ran 20 yards and Robbie watched him when he dropped.

The 360 Ground Blind did the job for Robbie again this year. Having a mature buck walk by 5 yards from your blind is more than you could hope for, but the 360 made that happen.

Soon the shadows began to get long, signaling the coming sunset. I noticed a change in the light and shading that looked cool and took the last picture of the hunt.

CatMan Canoes Up A 9-Point