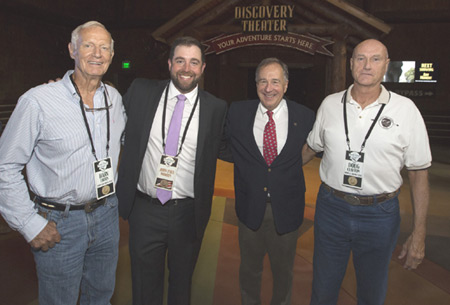 “Larger than the Smithsonian Museum of Natural History, this 350,000-square foot museum is a tribute to Native Americans, who were here before us. It is also a tribute to explorers, outdoorsmen, and conservationists who helped preserve our country’s rich outdoor heritage for future generations of Americans to enjoy,” said Doug Clayton, Pope and Young Club Board member. “You will encounter habitats ranging from desert, mountain, arctic environments, to deepest Africa, 35,000 live fish, mammals, birds and other wildlife while walking the 1.5 miles of trails. The museum is truly a destination for every person who enjoys the outdoors and wants to pass on the message that sportsmen and women are the greatest conservationists.”

The museum brings visitors eye-to-eye with the greatest collection of record-setting game animals ever assembled. In addition to 70,000 square feet of wildlife galleries and dioramas, the museum is home to the Boone and Crockett Club’s National Collection of Heads and Horns. The museum also houses the International Game Fish Association Fishing Hall of Fame, the National Bass Fishing Hall of Fame, the National Rifle Association’s National Sporting Arms Museum and the National Archery Hall of Fame. For more information on the Wonders of Wildlife Museum and Aquarium.

BIG 10 UNDER MY TREE