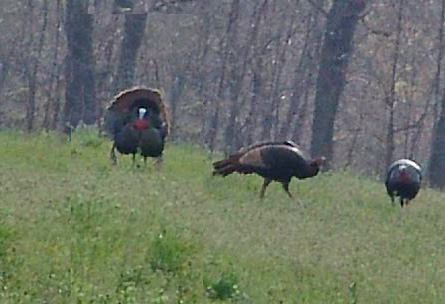 Scott Alexander Updates us on the Progress of the Reintroduction of the Eastern Wild Turkey in Ontario.

This year marks the 33rd anniversary of the successful re-introduction of wild turkeys in Ontario, and is a milestone reflective of the passion and dedication of hunters and outdoors enthusiasts for wildlife conservation.

For centuries Ontario was the home to the Eastern Wild Turkey. They were prized by Native American and settler hunters alike due to the skill and challenge required to obtain a harvest. In the late 19th century, deforestation in many parts of Southern Ontario was occurring in preparation for the expanding agricultural industry. Deforestation resulted in habitat loss for these wary birds, and in combination with the absence of wildlife management practices at that time, wild turkeys disappeared from the Ontario landscape in 1909.

Efforts to restore this magnificent wildbird to Ontario’s landscape began in the middle of the 20th century. Several unsuccessful reintroduction attempts were made using pen-raised birds, and these trials failed as the birds lacked the survival skills of their truly wild counterparts.

In the early 1980’s the Ontario Federation of Anglers and Hunters (OFAH), along with the Ontario Ministry of Natural Resources (MNR) started planning a new wild turkey restoration project involving the trap and transfer of wild turkeys from Missouri, Iowa, Michigan, New York, Vermont, New Jersey, and Tennessee to Ontario. In exchange, Ontario transferred wildlife for restoration projects in the USA, including: otters to Missouri and Nebraska, partridge to New York, and moose to Michigan.

Efforts to restore this magnificent wildbird to Ontario’s landscape began in the middle of the 20th century. Several unsuccessful reintroduction attempts were made using pen-raised birds, and these trials failed as the birds lacked the survival skills of their truly wild counterparts.
The Eastern Wild Turkey has been successfully reintroduced to Ontario, Canada.
The population of wild turkeys in Ontario is continually on the rise and recent estimates indicate a population of over 70,000 birds. Additionally, the range of wild turkeys is slowly creeping out of the Southern Ontario boundary, and birds are now being spotted as far north as Algonquin Park. The Ontario MNR reported a record harvest of wild turkeys in the spring 2008 season totalling 10,492 birds. Additionally in 2008, the MNR released a Wild Turkey Management Plan, and further expanded wild turkey hunting opportunities in the province by opening an autumn wild turkey hunt in selected WMUs. In 2009, the ministry has further expanded the fall turkey harvest.

The increase in knowledge over the 20th century of evidence based research in wildlife management has certainly contributed to the successful reintroduction of the Eastern Wild Turkey into Ontario. This knowledge, especially in ecology, biodiversity, habitat preservation, and wildlife population management, is vital to the success for survival of all wild species. The MNR and passionate outdoors people in Ontario are also carefully monitoring two other important wildlife management projects: the recovery of woodland caribou and the restoration of elk in the province.

The once absent wild turkeys are back due to this project’s success in restoring and safeguarding a species, wild turkeys. So, they are here for us to enjoy, and to help protect for the future.