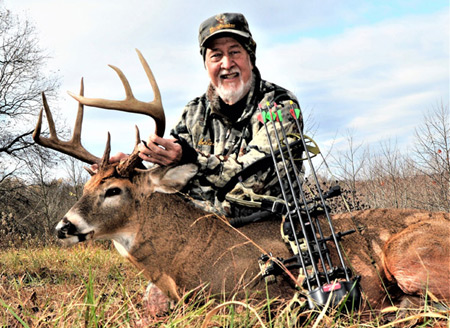 I JUST GOT A NICE NOTE AND PHOTO from a reader who follows my online posts and columns. He attached a picture of the young whitetail he’d taken with his longbow after several years of trying to tag a deer with traditional archery tackle. The happy bowhunter noted the deer wasn’t very big but was a trophy to him.

His pride was justified and warranted. His attitude was on target.

I congratulated him and wished him continued hunting success with whatever his choice of bow. It was refreshing to see a determined hunter set a personal goal, work hard to achieve it, persist in his quest, and be blessed with eventual success. In fact, it was a real pick-me-up note since lately I’d been disappointed and downright disgusted with many of the troubling online photos and messages from deer shooters (I won’t call them hunters) whose disrespect for the animal and the sport was blatantly apparent.

For example, I unfortunately witnessed a posted video of a couple of guys standing with a small-antlered, field dressed buck hanging head down. They were “celebrating” the moment with a cold beer, which in itself is not all that uncommon after a hunt ends. But what followed turned me off – and likely offended many other viewers. That was the fact their celebratory beer was poured into the deer’s chest cavity where it ran out through the throat and bloody mouth to be swigged down by one of the happy hunters.

All I could wonder was “Why?” Maybe they were already drunk and simply sharing their post for its shock value. I didn’t stick around to see what else may have happened or what was said. Regardless, whatever their reason, they presented themselves for the entire world to see as successful hunters celebrating a kill. In that unseemly moment, they represented you and me to all viewers – hunters and non-hunters alike – and perpetuated the image of uncaring, mindless individuals acting stupidly while stoked on adrenaline and blood lust.

The fact is, no self-respecting hunter I know would denigrate himself or his animal in such a disgusting manner. However, try explaining that to the men, women, and youngsters who don’t hunt and had the misfortune to witness such an offensive visual atrocity.

YEAH, I ADMIT TO BEING AN UNCOOL GEEZER, mostly out of touch with the younger generation of hunters who kill something, whoop it up, high-five each other, and mug for the camera. And I’m certainly old enough to recall watching The American Sportsman on network television back in the 1960s and seeing bowhunting legend Fred Bear kill everything from whitetail and mule deer to grizzlies and polar bears.

But later I heard Papa Bear confide that shooting a snow-white polar bear and seeing the animal spinning around on the Arctic ice – biting at an arrow while blood spread across his side – led to the end of hunting kill shots shown on nationally broadcast television shows. Even in later decades, bloody arrow-impact scenes were taboo on cable stations. That’s when I first appeared on Bowhunter Magazine TV, Tom Nelson’s American Archer, and turned up as an occasional guest on TV shows hosted by Will Primos of game call fame, Mossy Oak camo’s Toxey Haas, and Realtree camo’s Bill Jordan. 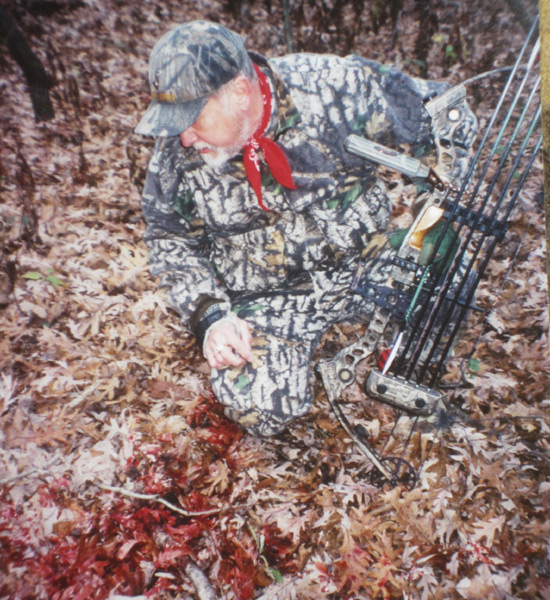 That policy eventually changed, although gory blood-letting scenes were usually edited out. Personally, I’ve been shown on camera arrowing deer, bears, wild turkeys, moose, and other game. Today, however, with the various Internet social media outlets readily available to anyone with a video camera, it’s become pretty much anything goes – and I mean anything.

Doubt me? Check for yourself.

JUST BEFORE BEGINNING THIS COLUMN, I made a quick check of  several pro-bowhunting groups I view from time to time. To the credit of most sites, rules are posted and monitored to avoid obscene language and images, personal attacks, and other no-brainer, common sense restrictions. However, on one hand it’s pretty much follow-the-rules-or-have- posts-removed, while on the other side – like the example of drinking beer from a buck’s bloody mouth and nostrils – is apparently okay.

In only a cursory examination of posts, I noted a photo of a grinning hunter posing with a dead doe and her fawn. The guy wrote something to the effect that he “couldn’t bear the thought of leaving an orphan fawn in the woods.” So he killed it, too. That may be legal, assuming he properly tags both animals. But whether his actions and poor attempt at humor are acceptable is up to viewers to decide. Me? I’m convinced that if a hunter disrespects a dead animal in any way, he or she had little respect for it when it was alive.

Another attention-grabbing photo showed only a hunter’s bloody hand clutching a deer’s heart with an X where the broadhead sliced through. Effective? Certainly! A good thing to post publicly? You make the call. I will admit that I have numerous photos of me holding the duly perforated hearts of deer, moose, caribou, elk, antelope, and bear. None has ever been published or posted until the image that accompanies this column. Note that I cleaned up the bloody organ and my fingers before snapping the picture. It still gets my point across, minus the gore.

Several online pictures – including some of trophy-class bucks – showed arrows jutting from their bodies and tongues dangling from bloody mouths. For the 35 years I led Bowhunter Magazine, we never showed jutting arrows or lolling tongues. It takes only a few minutes to wash or wipe away excess blood and excise or put an animal’s tongue back in its mouth. Maybe I’m super sensitive on the subject, but no one can convince me that photos of once-in-a-lifetime hunting moments, posing with a tagged animal, benefit from distractions sure to make some people cringe. Lastly, please, no tailgate shots of game sprawled in pickups or hanging in a garage or barn. If nothing else, find a bit of grass with a tree or bush and pose the animal in some sort of habitat where it lived.

Posted comments matter, too. One macho “hunter” bragged about an elusive “sumbitch buck” that he didn’t get but vowed to tag in time. Whereupon, a female friend urged him to “put a stick in that pig.” They might as well wear a sign saying “I’m an insensitive boor.” And speaking of “stick,” there are way too many comments about “sticking one” or “I just stuck a real toad.” The hands-down winner was a guy who claimed he’d “stuck” a big deer through both lungs, had a great blood trail to follow, but ended up tracking it 300 yards and losing the trail.

Really? Both lungs? Losing the trail after 300 yards? Several people responded by noting that he needed a reality check lesson in deer anatomy, because if the shot had taken out both lungs the deer wouldn’t be alive to travel 300 yards.

Then there was a guy who talked about taking 100 yard “head shots” and dropping animals where they stood. He also swore that front-facing shots and head shots were the most deadly shots in bowhunting. Makes me wonder if he’d ever taken a Bowhunter Education Class or understood the importance of proper shot placement. Finally, there was the fellow who said he’d hit and lost several bucks after shooting each “behind the shoulder” and getting only a few inches of penetration. He wondered what he was doing wrong and got an earful from disbelieving bowhunters who questioned everything from his eyesight to bow poundage and broadhead choice. Shoulder bone and muscle hinder penetration; ribs don’t.

Obviously, this subject is too involved to be covered in a single column. I’ll have more to say next month in Part II of “The Good, Bad, and Ugly.” I’ll offer more examples along with positive suggestions for how to respond to people whose posts, photos, and actions reflect poorly on all ethical and responsible bowhunters concerned about a real and growing problem adversely affecting our great sport.