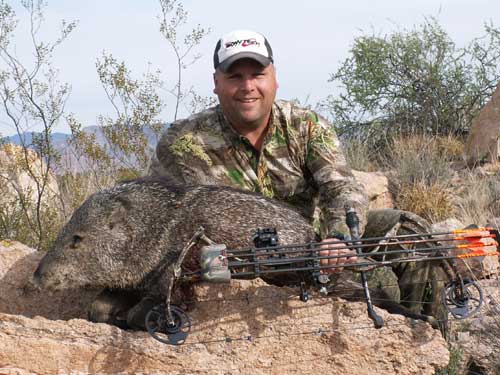 I could have never anticipated the turn of events that would come my direction as my body is still feeling the pain from this hunt.

After putting in the required amount of scouting 2 weeks ago to locate a SW Javelina, then hunting for Javelina all of last weekend with out any success. I receive the green light from my wife (Kimberly) to continue one more weekend on my pursuit for a 2010 Javelina. Understanding that I had spent more time then most would have expected, I was able to finally shoot my Javelina at a short distance of 14 yards. I must first start off explaining that getting to this point was very interesting to say the least and it will be a day in the field that will be burned in my memory for a long, long, long time.

My morning started out by traveling to a well known Javelina location with my good friend Paul. We arrived at the base of this specific mountain which had been very successful in the past years. I could have never anticipated the turn of events that would come my direction as my body is still feeling the pain from this hunt. With the both of us ascending up the mountain side I grab what appeared to be a stationary rock. Pulling myself in an upwards position it ended up being apparent the rock was not only loose but released completely from the added body weight I strained upon it. At that exact moment the rock propelled past me and I realized I made what will be a terrible decision not pull on the rock confirming stability as I was heading back down the mountain side in a backwards roll.

During my first backwards rotation I found myself concentrating on protecting my head from hitting anything along the way. Instinct took over and I went into the tuck and roll position. At this exact time I was also trying to keep my bow in hand not crash it it into any hard rock surfaces on the way down. Second backwards rotation found me gaining momentum and eventually driving a sizable hedge hog cactus deep into the back side of my thigh. At that point my only thought was to try and stop the backwards momentum and prioritize my body over equipment.

With cactus quills still penetrated into my body, instinct took over and I desperately pushed my body from the cactus which once again started my downward decent for my third rotation. Finally stopping abruptly with the use of my left arm which was embedded into a barrel cactus, my arm and shoulder slammed into the rocks and cactus which then pushed the cactus out of the ground. With this cactus now being loose I some how landed on top of it…….more OUCH! Finally stopped I was able to stand up, shake the dust and rocks from myself, then thank God that I had finally stop rolling down hill.

Not caring or realizing how many quills were embedded into my body I then began assessing my equipment.  My BowTech Admiral had taken a beating with so many visible gouges and scratches, many like I have never seen before on a bow. The Max 4 velvet touch Camo was scratched so deep the fibers from the limb lamination were visible.

I pondered if my trusty BowTech would even shoot straight after this rough fall? My Bohning quiver was completely knocked off of my bow and surprisingly not a single Victory arrow with G5 Montech broadheads deployed, thank you God! My Horn Hunter backpack had multiple areas of fabric damaged due to the sharp rocky tumble and finally my Garmin GPS with a deep scratched lens in the middle of the screen is going to be hard to read on my next trip in the field.

After arriving at our glassing location I then sat in my underwear for what seemed over an hour pulling more cactus needles from my body and Scent Lok clothing. I could not believe it but I even had needles on the top of my shoulder. I guess when I rolled over so many times it was inevitable to pick up a few quills in this location while rolling backwards down hill. In my thigh, the main puncture area where blood was running freely, I had over 100 puncture holes that will remind me for a long time of the pain I endured on this adventure hunt.

After rearranging myself and getting situated to glass, Paul was able to glass up a Javelina giving up their location so the pursuit for my Javelina could continue.

Crossing multiple washes we then stalked to a vantage point that gave us a downward view of the location these critters were enjoying. Glassing from the distance of 80 yards I was able to pick out 3 Javelina holding to the same location they we spotted 3 plus hours before. Not being able to get any closer then 40 yards, due to the steep bank and loose rocks, we knew we had to think of another plan.

Paul decided to blow his predator call to see if we would have any luck bringing the Javelina out from the thicker cover. As soon as Paul hit the call, the Javelina sprinted out heading away from us down into a wash, just my luck? I frantically signaled with my hand to stop the calling so the sound didn’t scare them completely out of the country.

Glassing up into the wash 5 Javelina appeared and were heading directly for my position. At that moment I realized I had just set my self up for Javelina success. Not being picky, due to the earlier circumstances, the first Javelina got into a range of approximately 20 yards. It stepped behind a very large Saguaro cactus to allow me to draw my bow. Stopping the Javelina with a soft grunt I was able to stop it in the wide open desert which allowed me a short 14 yard shot. With the arrow completely passing through the Javelina, it bolted off on a quick 40 yard run before expiring in a garden of cacti.

This is exactly how my Saturday afternoon hunting Javelina in the Arizona desert was completed and I wouldn’t have it any other way! Except of course for my roll down and through rock and cactus. Many hunters that I have spoke to had said Javelina hunting is easy, I disagree. I want to also thank my friend Paul for all his help.  It a pleasure hunting with you and I really look forward to many more great trips spent with you in the near future, even if it’s with me rolling backwards down the mountain side……LOL