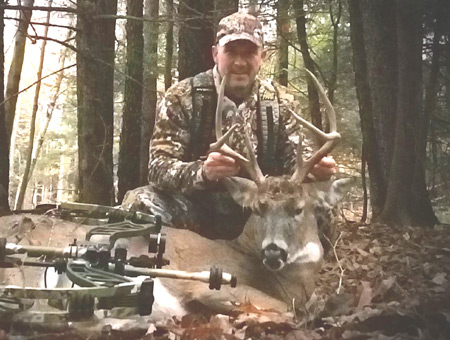 Many of my hunting buddies and I have talked about a hunting “Bucket List” of animals and hunts we would love to try in the future. One of my “Bucket List” animals is a large 6 point whitetail big enough to make it into the Northeast Big Buck Club Record Book. The NBBC has a 100 inch archery minimum for any buck taken fair chase and doesn’t deduct from the buck for imperfections either. So for the past few years I have been on the lookout for a 6 point that could make it into the book.

The quest  to make the book is even more challenging for one major reason. I live in a Wildlife Management Unit in Pennsylvania, that has a 3 point up requirement. Luckily, I have access to a camp in the neighboring Wildlife Management Unit that has a 2 up requirement. Every so often I will make the ½ hour drive to the camp and hunt one of my favorite stands. This is exactly what happened on the evening of Monday, November 6th.

I returned from my Ohio trip on November 5th. I was hoping to come home and see the 10 acres of corn, across the road, picked and out of the way. The deer had been living in the corn and not coming out very often. To my dismay, the corn was still up and with only one week of PA Archery season left, I made the decision to hunt at camp Monday evening. I packed my truck with all I would need for my hunt and hoped that work would go fast so I could have a great hunt.

The clock seemed to be moving snail like! I had a hard time concentrating the entire day. My school day was over at 2:50 and I was out the door in a flash. Traffic was moving quickly and I made it to camp with plenty of time to get in the stand and hunt. I quickly dressed in my G-Force Evolved Camo, Sprayed Down with Nature’s Essence Products, put on my harness and was off to the stand.

The weather was brisk and calm with hardly any wind. I used some Smokey’s Doe in Heat lure and made a drag to my stand. Before climbing into the stand I hung three Buck Cages in a semicircle loaded with Smokey’s Tarsal Gland Scent, Smokey’s Doe In Heat, and Nature’s Essence Triple Threat. The sun was still high in the sky as I hooked up and climbed into my stand.

Once on stand, I  pulled up my Athens Revelation and pulled a Black Eagle Zombie Slayer  with a Grim Reaper Hybrid Head.  I placed my backpack carefully  on a limb above my head and I was ready for my evening sit.

Once I felt the time was right I grabbed my rattling antlers and grunt tube and worked a rattling sequence, grunting as I rattled. After the sequence was over I used my can call to let out a few estrus bleats. The woods were loud. I could hear Pope and Young squirrels running all over the place. I slowly scanned left to right and then right to left. I was on an oak ridge with a big draw to my right. If bucks were going to come cruising, I figured they would come toward me out of the bedding area. Right now, there was nothing coming my way.

My watch flashed 4:25 and the sun was significantly lower. For the first hour of my hunt all I had seen was a bunch of busy squirrels. I decided to do another rattling sequence with more grunting and doe estrus bleats. Wow I thought! My rattling sequence was awesome and every rutting buck within miles should be headed my way on a dead run. I always tell myself to think positive and good things will happen. As I was still in awe over my life like rattling sequence I heard the familiar sound of antlers on a tree. I reached for my binoculars and scanned the direction for the buck making a scrape.

60 yards away behind a good sized oak tree, I could see antlers working a tree. I grabbed my grunt tube and gave a loud, low grunt. The buck stopped scraping the tree and stepped my way. I could see his huge body and tall G2’s. He was closing the distance quickly and was going to be within bow range in a matter of seconds. Reaching for my Rev 6, as he stepped behind a tree, my hand felt the familiar grip of that amazing shooting bow. I turned on my Ultra Pro X Camera and waited for the buck to get closer.

With the buck 30 yards away I could see he was a big 6 point. The rack looked small compared to his girth. His swelled neck was steady as he looked around for the buck that had challenged him. I could feel the cool wind on the back of my neck. I just realized the wind had switched and my scent would be headed right toward his nose. Knowing my Essence of Fall would keep me covered I concentrated on the buck closing the last 10 yards.

I had ranged a few trees around me and I also knew that my pink Buck Cage was at 20 yards. The big 6 was on a course for that Cage. The buck passed behind a huge oak and I took the time to draw my bow,  anchor and then waited to see what the buck would do. Just like he had read my mind, he came to a stop. He lifted his head and took a long smell of the Buck Cage. I released my BEA Zombie Slayer and the arrow drove deep into the buck. He spun on his back legs, ran about 15 yards and then walked into a clump of pines. I could see his legs as he started to wobble and heard him cough. He took a few more steps and fell over.

I stayed in the stand another half hour even though I saw him go down. Too many times have I heard stories of guys who thought their deer had expired only to find they had gotten up and ran. I played a few games on my phone, sent a few texts, watched the video on my camera and did what I could to pass the time. I thanked God for the opportunity to be out in his creation on such a beautiful evening. I then anxiously packed up my belongings and carefully climbed down.

From the ground I could not see the buck but I knew where to walk to reach him. The woods were becoming dark and the last of the sunlight was fading quickly. I walked the 50 yards from my stand to the buck and my first impression was his body size and his swelled neck. His rack was not very wide but his main beams were long and his brows and G2’s were solid. I knelt beside the buck and gave thanks again to God for the meals this buck would provide many people. I took out my camera and started taking pictures and even did a live segment on my Left In The Field Outdoors facebook page. I filled out my PA Buck tag and pinned it to his right ear. I walked back to camp and placed my bow and backpack in the truck, grabbed my knife and the keys to the tractor. 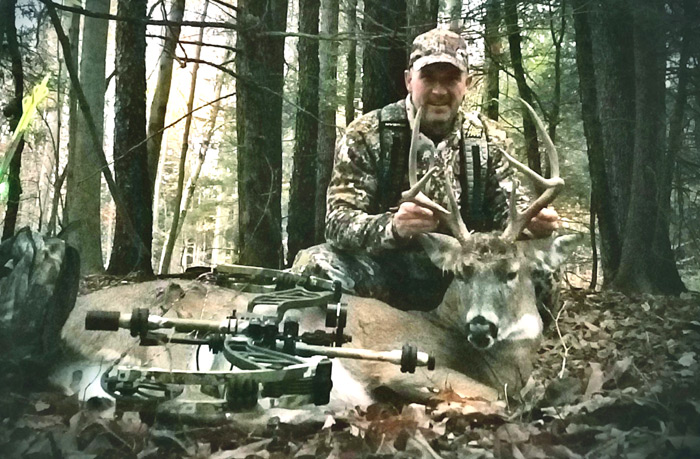 With a huge grin on my face I drove the tractor back to the buck, dressed him and pulled him out of the woods. Back at camp I loaded him in my truck for the trip home. I washed up and locked up camp. I was excited to find out that my buddy Tim Fox had killed a buck that evening as well. The drive home was relaxing and I couldn’t wait to show my kids the Bucket List 6 Point I had killed.

At home my kids came out into the cold night air. My daughter was so excited and wanted to look at the huge body. My son, Samuel, gave me a high five for congratulations. Both children agreed they need to be in the stand as much as possible over the next few days. Over the next few hours I showed my Big 6 to all of my buddies. We had some good laughs and shared more about our Bucket List Hunts. I can’t wait to see what will happen over the next few days hunting with my kids.

How To Score Your Buck