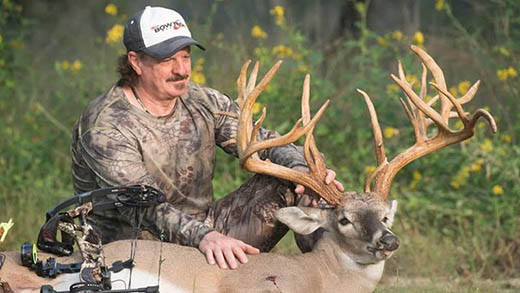 Day #4 of my hunt, and I got up early and went to a new Shadow Hunter Blind location. The hunt was a duplicate of the prior morning’s hunt. Lots of does, fawns, and some young bucks. When I decided to call it a morning the temperature was getting scorching hot.

Back at camp we ate a great breakfast and Keith had a friend from Pulsar arrive. The gentleman’s name is Kevin Reece. Kevin is in management for Pulsar. Pulsar is one of the sponsor’s for Keith’s TV show. Kevin had a new scope that he wanted Keith to try, we all got in the mule and went to the gun range.

Kevin and Keith starting shooting and sighting in the new Pulsar scope. I do’nt know much about rifles and scopes but I enjoyed watching them dial in the scope and their shots were inside a quarter which seemed pretty impressive shooting to a novice like me.

After shooting, Keith drove us around in his Mule to see a portion of his property. Keith said “I have to show you guys something”. He took a hard left and in 100 yards he stopped and said look over there. This huge tree had been uprooted and fell and demolished a brand-new stand that he had just put up. 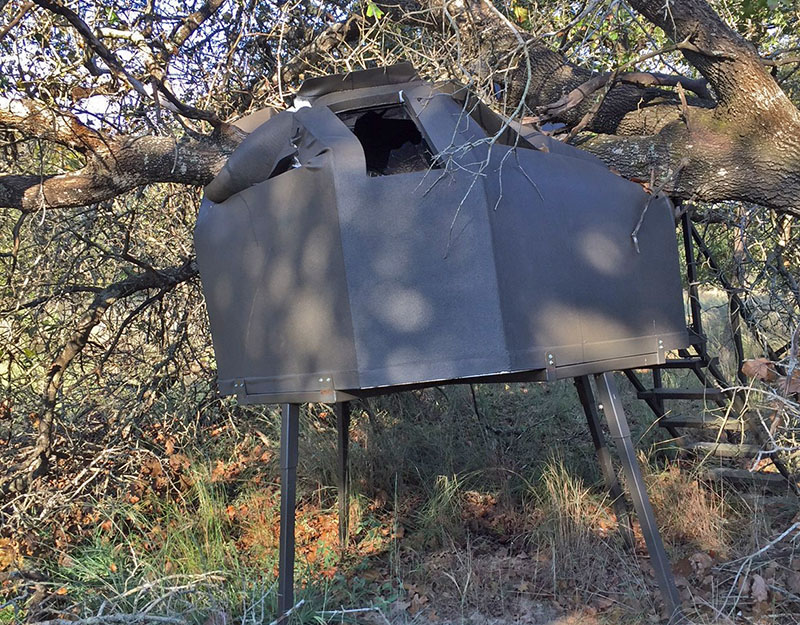 As we all know, Hurricane Harvey hit Houston very hard and the remnants also hit the surrounding areas. Unfortunately, the stand was wasted.

We drove back to camp and sat down and visited during a great lunch that Chris made. We discussed the strategy for the afternoon hunt. Keith and I decided to to return to the same location that I hunted the previous evening. As hot as this afternoon was, we felt chances were good for catching the monster around the water. Keith went with me to  video my hunt and if anything happened he might be able to use the footage for his The High Road television show on the Pursuit Channel.

The temperature was 95 degrees as I began my afternoon hunt. At the stand Keith sat 5 feet above me to video. I kept thinking that the monster buck may show himself around the water hole. Thirty minutes later I noticed some deer off to my left on their way to the water.

Five minutes passed and I saw more deer going toward the water. Off to my right I noticed some movement and saw a great buck on his way to the water and soon he was standing 20 yards broadside.

I was so tempted to let an arrow fly. But Keith told me to remain patient as it was still early. Believe when I say, it was tough to restrain from shooting.

The big buck stuck around for ten minutes — tempting me before he headed out of sight.

Later, we had about ten minutes left of good shooting light left. All of a sudden, we saw a deer walk away from the water hole and come directly towards us. Keith said “that’s him Rick, that’s him”.

The Texas Giant was on a direct path towards us and getting closer fast! Quickly, he was ten yards in front of me and quartering away. I had the BowTech Reign and Black Eagle Arrows tipped with the Grim Reaper “Whitetail Special” ready to go and drew; but at full draw, there was a problem!

Oh no, I could not see through my peep sight. The new peep sight I was using was so small it could not gather enough light. Thankfully I did not flip out and slowly I let up and turned on my lighted pin which made everything fine. Taking my time, I went back to full draw and anchored the pin on the Texas Giant’s vitals. Squeezing the trigger, the Grim Reaper was on its way.

Whack, I could tell it was a good hit. I looked up at Keith and he gave me the thumbs up. When we got out of the stand we went to where the shot was and immediately knew the Grim Reaper had done its job. The blood trail was steady like a road map and in 70 yards there laid the Texas Giant. I said a quick prayer and thanked my lord for such an awesome experience. We took some pictures and loaded the giant in the back of Keith’s mule and returned to camp.

At camp we did the scoring and the counting of points. There were 26 points and after the third time of scoring, to ensure we were right, the buck scored an impressive 266! Keith felt this deer would be the largest to ever come out of his region of Texas.

I have to tip my hat to the game management enhancements at the Texas Hidden Spring Ranch. Keith has a protein feeding program implemented that is second to none. He feeds tons and tons of Record Rack products that take his deer to a higher level. He also culls the deer that need to go and he has an incredible 1 buck to 1 doe ratio.

The next day we said our good byes and on my drive back to North Texas I couldn’t stop thinking about the incredible hunt and the great folks I had met at Keith Warren’s ranch. This was my second year in a row to hunt at The Texas Hidden Springs Ranch and both experiences were incredible.

But more importantly I thought back over my 48 years of bowhunting and all my experiences, good and bad. Archery and hunting have been a major part of my life and I would not trade those happenings for anything.

I hope everyone reading this always promotes our sport in a positive manner. Remember, we are the voice of bowhunting and it’s important to stay positive and support all those who legally hunt. Please make sure that all of your hunting endeavors are legal and ethical. We see so many people in this day’s world trying to impress and be somebody and they will stoop to any measure to try and impress. This just sickens me, this is not who and what we are about. Sorry for the rant but I had to get that off my chest.

I would like to give thumbs up to these great companies who provided products for this bowhunt.

How to Shoot Better Under Pressure