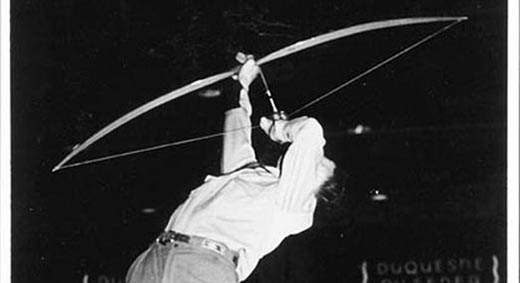 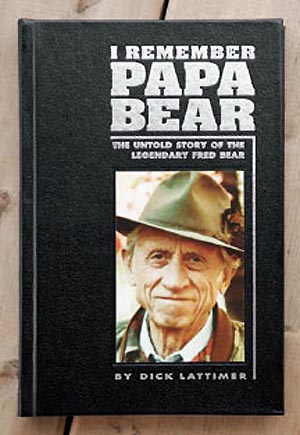 I REMEMBER PAPA BEAR – Chapter 1b

During this same time, along with working the show circuit, shooting in archery tournaments and working hard back in Detroit to build his small archery business, Fred sharpened his skills at getting free publicity. He could not afford to pay for traditional advertising in those early days, but he knew that a deer taken with a bow and arrow could usually get him some ink on the sports pages of the area newspapers, and, eventually, even in national publications. Especially since doing so was so very unique in those early days of bowhunting here in the states.

He made friends with the Detroit sportswriters, and one in particular, Jack Van Coevering, of the Detroit Free Press, played a huge part in Fred’s start in this quiet self-promotion business. Van Coevering took his movie camera up to Blaney Park in November of 1942 and followed Fred around as he hunted. Fred finally took a deer with his bow on November 13th, resulting in the first of Fred’s films and the first of a bowhunter in Michigan harvesting a deer.

In October 1944, Albert Stoll, Jr., conservation editor of The Detroit News, also gave bowhunting and Fred a real boost with a two-page spread in its pictorial section. Photos of Nels Grumley (Fred’s first bowyer), Daisy Olsen, and other Detroit area archers, were shown on a field archery range. Grumley was shown with a rabbit taken with bow and arrow, and Fred was shown at full draw with his unusual snakeskin-backed osage orange 70-pound bow. He at that time was president of the Detroit Archers Club and the three-time state champion.

The article pointed out that 2,000 of the state’s 15,000 archers also hunted small and big game with their bows. And that in 1943 the state’s 807 licensed bowhunters had taken 31 deer. In 1944 the bowhunting season was to be from November 1-14 in every county of southern Michigan and all of the Upper Peninsula. The article pointed out that, “This was authorized to reduce the deer population in our southern counties where the animals have become established and are proving a nuisance over farm lands where it would be highly dangerous to use rifles.” This positive spin on the short-range sport of bowhunting still is used today to justify the culling of deer herds in urban areas of this country.

Fred also was able to work in some publicity for his Detroit Archers in this article by feeding the writer the information that the Detroit Archers had an archery range at Telegraph Road and Ten and One-Half Mile Road—70 acres with 28 targets in a roving range. In other words, “Dear Reader, come out and shoot bows and arrows with us.”

A year later in 1945, Mr. Stoll again gave Fred a ton of pictorial coverage when he carried photos and a short article on Fred’s first successful hunt for moose in Ontario. And the key to Fred’s entire effort to “sell” the idea of hunting with the bow and arrow, thereby creating a market for his new products, was set in the very first paragraph:

“‘One Arrow Bear,’ they call Fred B. Bear, president of the Detroit Archers Club since he returned from the northern Ontario wilderness with a 1,500-pound bull moose. Bear’s feat clearly demonstrated the effectiveness of hunting big game with the bow and arrow, a sport that is rapidly expanding throughout the nation.”

In 1946 it was another 14-photo pictorial spread covering Fred’s successful hunt for his first bear. This one appeared in the Detroit Free Press in November of that year. What outdoors-person could resist the photos of the Ontario hunting camp with Fred’s Native American guide, Johnny Negonapinee? Bowhunting really began picking up momentum.

Also about that time an article about bowhunting appeared in Goodyear’s Magazine for Men featuring Fred. Titled “Modern Bow Hunters Revive The Old Indian Game,” the article showed Fred with a bow and arrow deer as well as shooting at an aerial target thrown up by an assistant. After explaining the sport to its readers, Goodyear magazine had this to say about Fred:

Curly-haired, 44-year-old Fred Bear of Detroit is, perhaps, as accomplished an archery hunter as you’ll find without combing out the record books. He’s been bending a bow for 20 years—and he came to the bow only after a childhood and early manhood spent on the shooting end of a huntsman’s rifle. He’s an ardent archer today, and in fact, his love of archery has colored his entire career…” Archery is growing fast today as a sport, as well as a sporting method of hunting game, big and small,” he says. “The manufacture of archery tackle passed tennis four years ago, on a basis of dollar volume, and it’s still on the rise. The states are recognizing the sport’s growth and are providing for it in revisions of their game laws. Many states have special archery seasons on deer. Michigan typifies the growth in popularity of bow and arrow hunting. In 1937, the first year of an archery deer season in Michigan, 194 licenses were issued. In 1941 this had increased to a total of 1,016. After a slump during the war, owing to transportation difficulties, and the workings of other war restrictions, archers roared back stronger than ever in 1945—and Michigan issued a total of 1,950 licenses.

“Sure we play the Indian’s game,” Fred Bear will tell you, “but we don’t ‘play Indian,’ as many people seem to think. We stalk, track game and shoot much as the Indians did. But we wear no feathered headdresses, no fanciful buckskin costumes, and we never smear our faces with war paint. We’re just an ever-growing association of huntsmen who believe there’s more fun in hunting with the handicap of the bow than there is in hunting with the sureness of the gun.”

Our Grayling weekly newspaper, the Crawford County Avalanche, announced the start of Bear Archery production in Grayling in its May 1, 1947 issue. After going into the details of the size and cost of the modest new plant, the article revealed a bit more about how Fred helped build the sport of bowhunting in Michigan, and, thus, the market for his products. Here is just a portion of that article:

Bow and arrow hunting is growing in popularity by leaps and bounds, as witnessed by the bow and arrow hunting bill recently passed by the Michigan House. The bill is now in the hands of the Senate, and would open Montcalm, Ionia, Alpena, Benzie, Iosco, Leelanau, Newaygo, Gogebic, Roscommon, Montmorency, Oscoda and Crawford counties from October 1 until November 5 for the hunting of either buck or doe with bow and arrow. The vote in the House was 82 to 1 in favor of the bill.

Mr. Bear and the company have been active in promoting the sport, and he and Mr. Grumley are well-known for their hunting exploits with these weapons. Mr. Bear has both a moose and bear to his credit in hunting with bow and arrow.

The company normally employs about 20 or 30 men and women when in full production.

Fred continued his one-man publicity campaign to reach the hunters in Michigan by convincing the Detroit News to carry a full-page pictorial in its Sept. 5, 1948 issue showing bow production in his new archery plant in Grayling where it had moved the previous year.

Here’s some of that article:

Manufacture of hunting and field archery equipment remains for the most part an enterprise calling for skill and patience as it did in ancient times when bows and arrows were in common use. More, according to Fred Bear, of Bear Archery, Grayling, Michigan, who says that modern materials have made it possible to produce more accurate equipment than was the case previously. Wood for use in bows is seasoned for five or six years and then matched into sections, each section representing a half of the bow. The sections are formed individually and then joined into a bow by cutting a ‘fish tail joint’ in each section, joining them to form a complete bow.

When the bow has been formed, the task of reducing it to size begins. Excess wood is removed by hand and there are frequent testings to determine its accuracy and power. “Tillering,” removal of wood from each half of the bow, makes it flex evenly on each side of the handle. After finishing, each bow is mechanically tested by being flexed thousands of times…three varieties of wood—osage, yew and hickory—go into the making of a hunting bow.

A PROMOTER IN BUSINESS, TOO

Naturally, Fred designed most of the equipment and techniques used in the manufacture of this early archery equipment as he did for the industry during most of his years during the 40s, 50s and 60s! Fred permitted everyone in the industry to use his inventions for the good of the sport. No royalties were ever charged on his patents in those days. Can you imagine anyone doing that in today’s dog-eat-dog business climate? But that’s just the kind of person Fred was.

It was this magnanimous philosophy that permitted our competitors to use the methods and machinery he invented to help turn our small industry’s manufacturing into mass production to reach more potential bowhunters from among the pool of firearms hunters from which we had to draw.

Fred had seen Henry Ford do the same kind of thing when he worked in the early automobile business in Detroit. He even ran into Mr. Ford occasionally as he made his rounds of the various offices selling advertising banners in those days. Fred did for the archery business what Henry Ford had done for automobiles; cut the cost of the product by smart mass production, thereby enabling more Americans to purchase his products.

This permitted bow production to go from being a “one-at-a-time” handcrafted product that had been done pretty much the same way since bows had been invented more than 10,000 years before, to one that could be mass-produced using bow presses and modern technology.

Incidentally, Fred patented this breakthrough technology in 1951, the first year he used the process in Bear bows. Fred had pioneered the use of continuous filament fiberglass for bow backing and facing. This was a perfect material for use on bows since it recovered completely from the stresses of compression when drawing the bow and subsequent extension as the arrow was released.