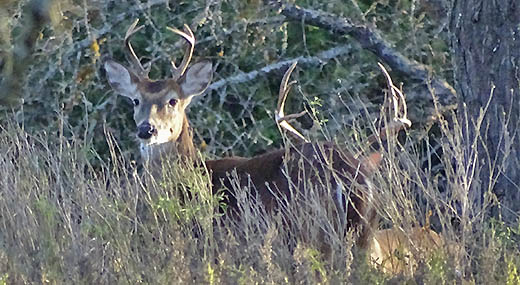 November 20 Was A Full Blown, Deer Rut Day Around Here, On The Count Of 94!

Got out early this morning (Nov 20). Soon, Deer Shadows began coming through my area. It was too dark to tell if they were bucks or does, even with the help of the low light Leupold binoculars. But as time passed I could make them out better.

Young bucks and does moved around actively. However at daylight they stopped passing through. No deer showed up and at 8:15 I decided to call it quits. I gathered my stuff up.

When I leave a stand or blind I always count to 100 before I go. Most of the time nothing happens, but sometimes it does, and now was one of those times.

At the count of 93 I noticed a deer in the woods uphill and south from my blind. I reached for my camera and got this picture as a doe walked out of the trees. 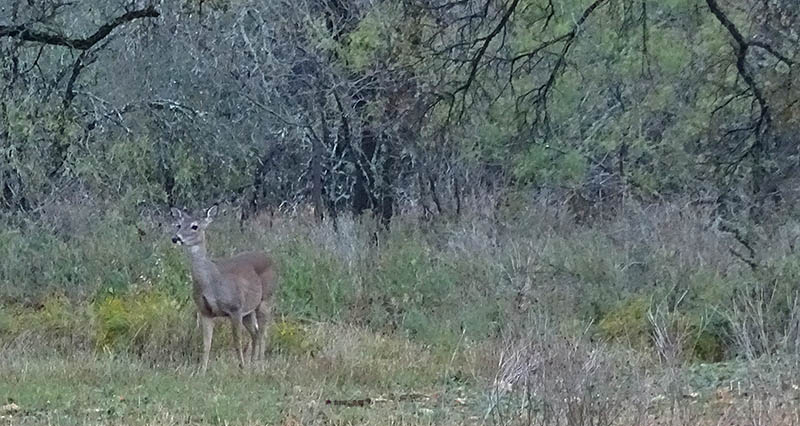 She was walking just the right speed, not too fast, not too slow. Behind her, still in the woods I saw another deer. I glassed it and saw antlers. The buck came out of the trees and followed the doe’s trail to the woods directly across from me.

I was ready with the camera. 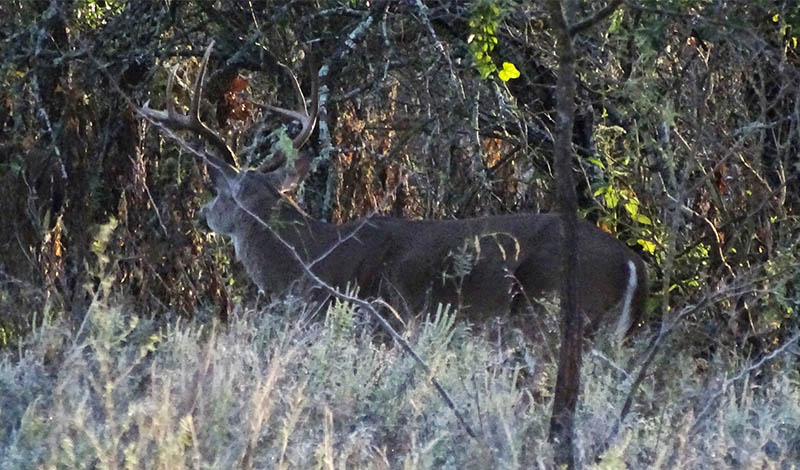 When he was 60 yards from me I got another pic. He’s a little hard to see but it is what it is. 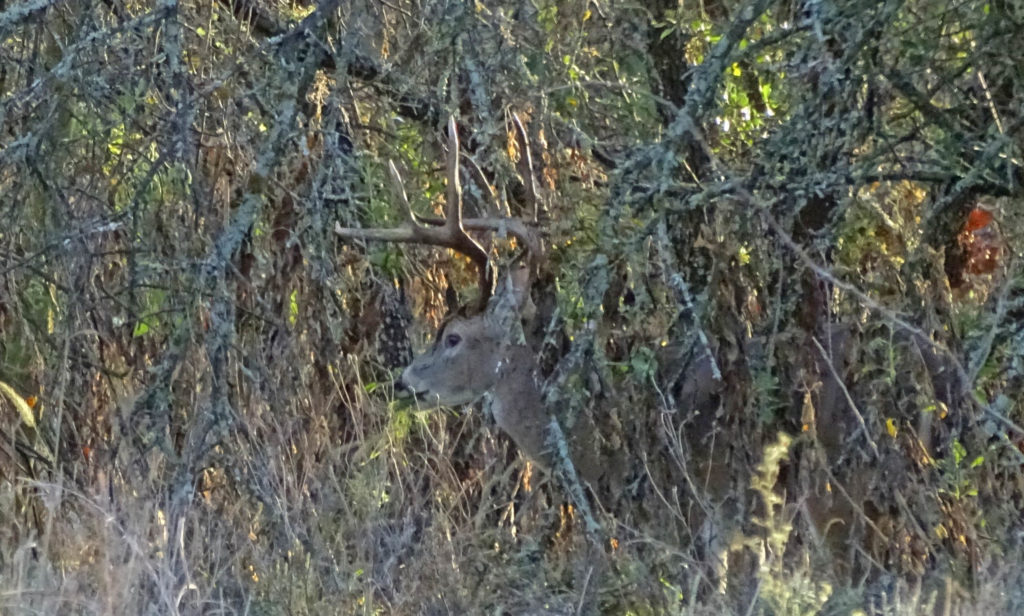 The doe was 50 yards ahead of the buck and she angled further into the woods. 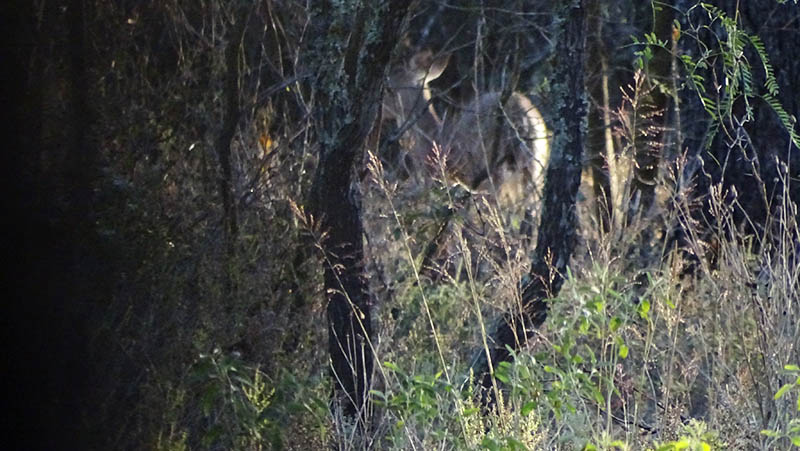 Two hundred yards behind them I saw a younger buck following them. 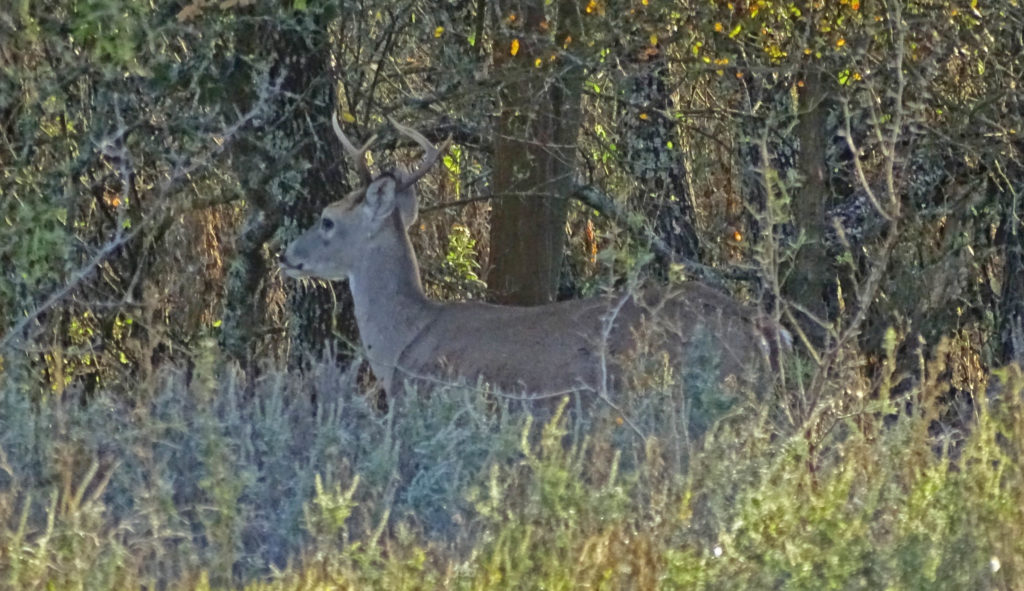 The light colored antlered buck went to the doe, no problem, she let him walk right up and they stood around together. 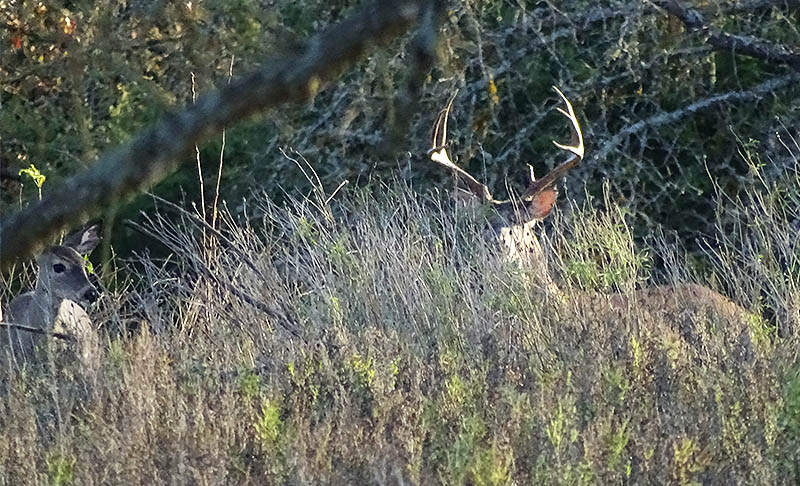 Another young buck appeared in the woods near them. 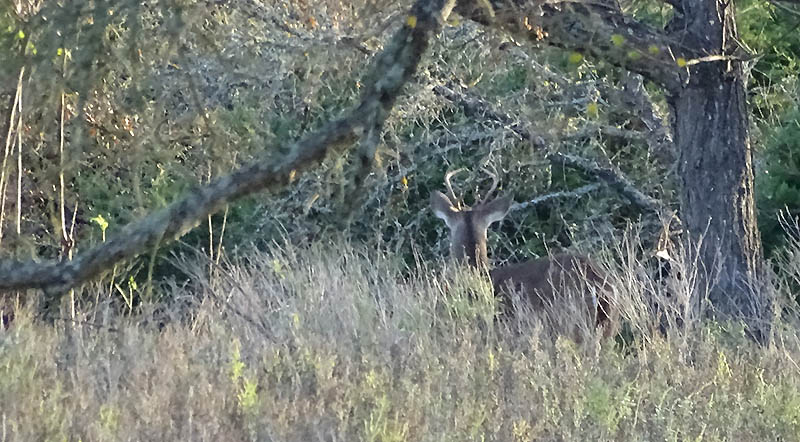 I took another picture of the buck. 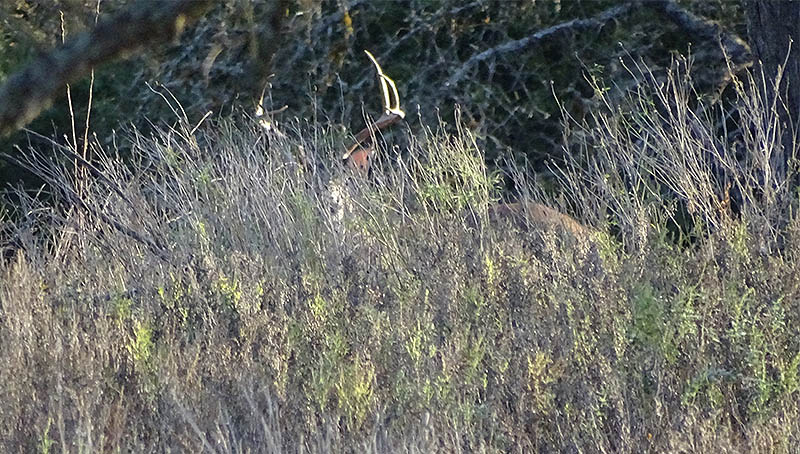 And zoomed in to get a closer view. He has a busted off brow tine. 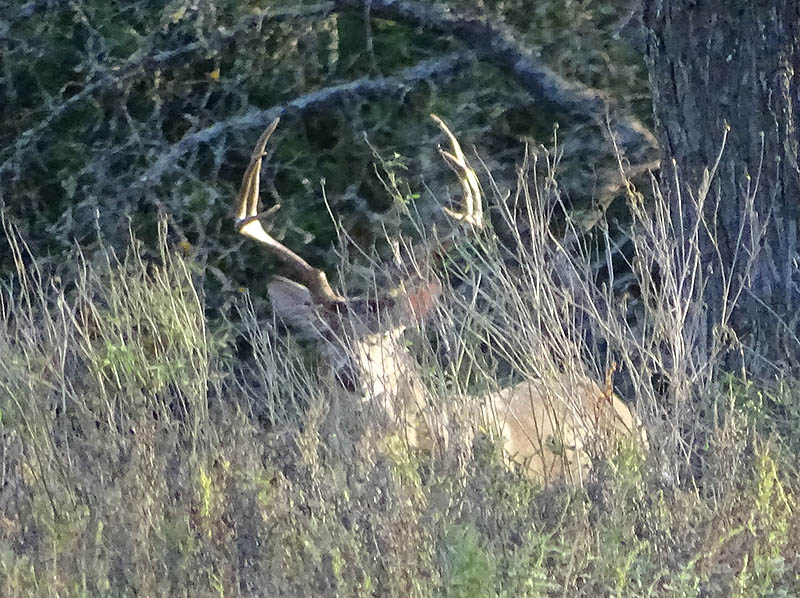 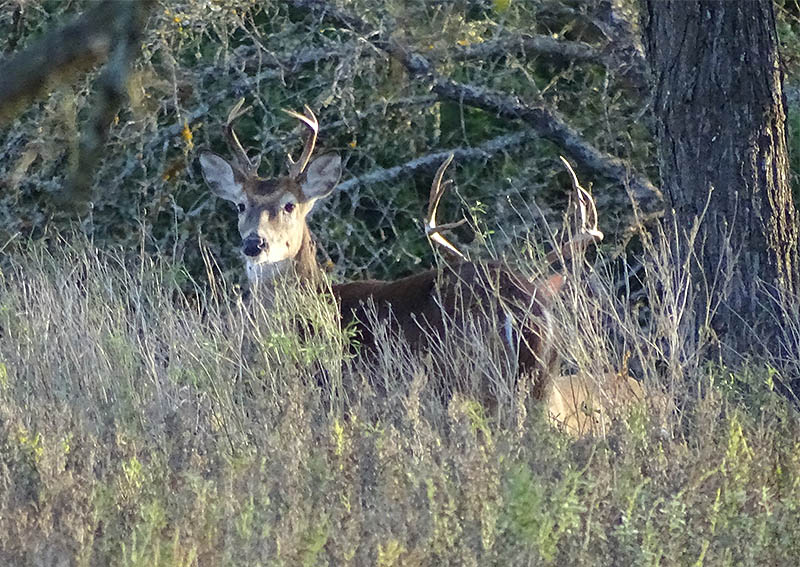 Soon the doe moved around the area and browsed some natural browse. 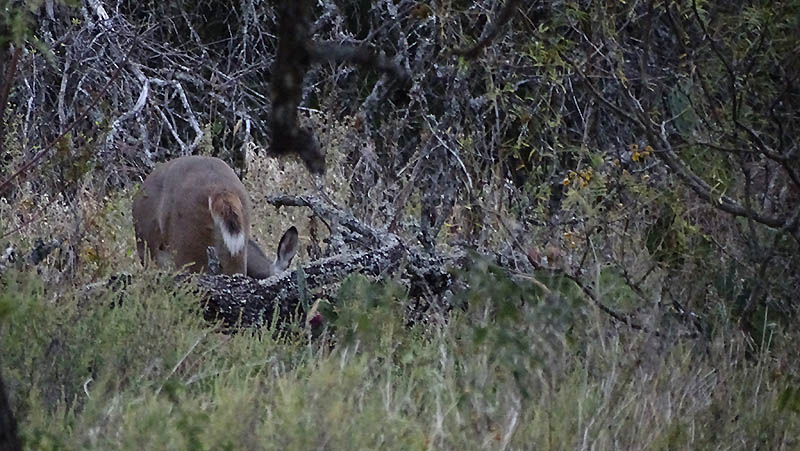 And another buck is in the mix. 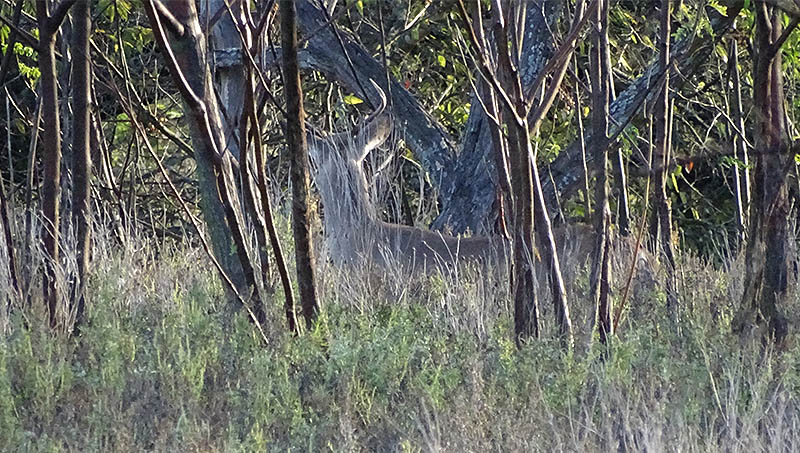 For the next half hour additional bucks came and left. The doe was always the center of attention but the largest buck was not receptive to some of the bucks getting close to the doe and he intimidated them out of the area.

An hour later there was still activity where these deer were.

Surprise, right here where I was, a nice buck came out off the hill and instead of following the trail to the deer party he set course in my direction. 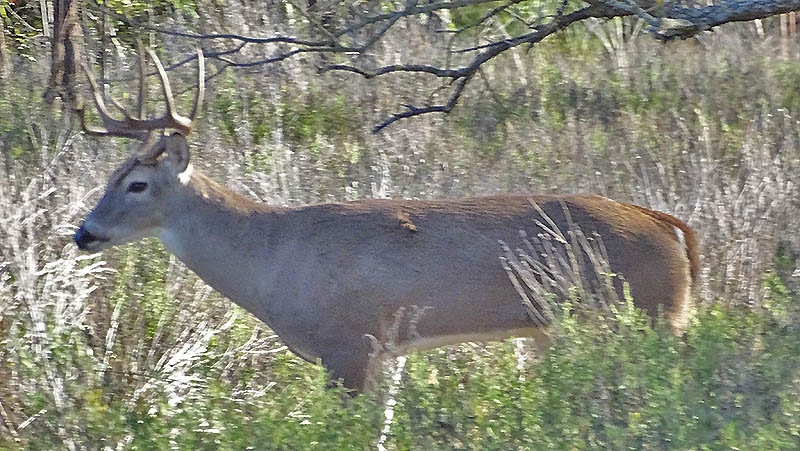 Two days ago I hung a Harmon’s Triple Heat Scent Dripper near my blind and in the above picture this buck is walking right by it. 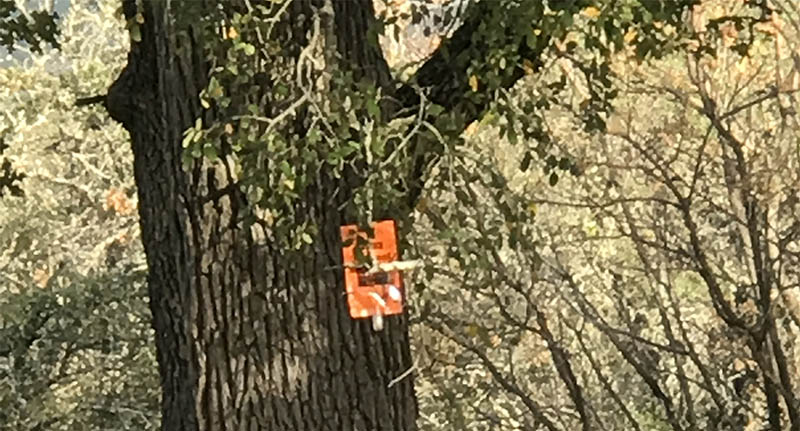 The buck passed by me at 15 to 20 yards but I penciled him in for another date in the future and give him a chance to bulk up. 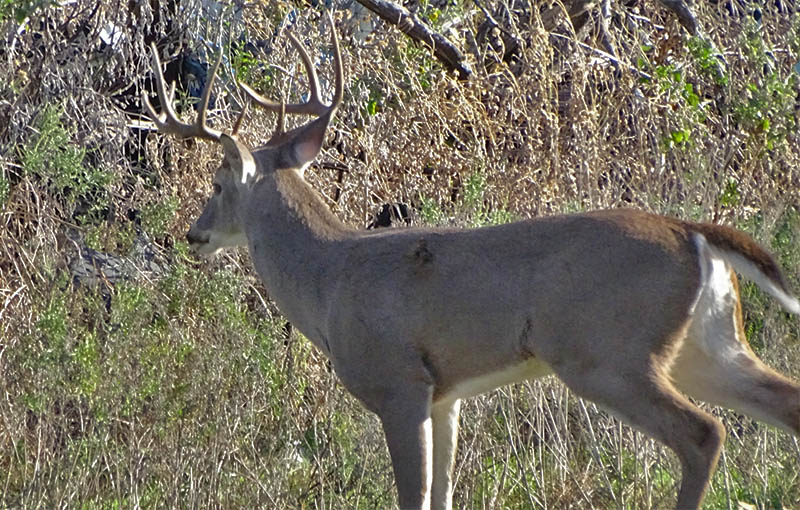 An hour after my area cleared out I returned to the house. One thing for sure, the Whitetail Rut is on in the deer woods around here.

PNUMA TERRA Camouflage: No Matter Where You Hunt