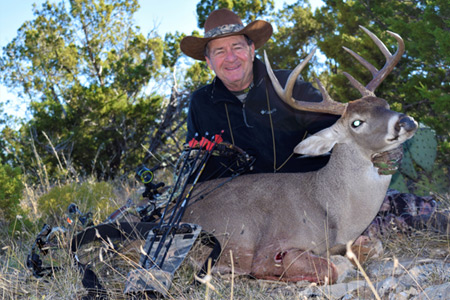 Wayne & I had received an invitation to hunt the Radde Ranch in Coke County, near the city of Robert Lee, named after the Great Civil War General Robert E. Lee. Who is thought to have set up a camp for a time near the current town site on the Colorado River.  Lee served in Texas from 1856 thru 1861 as a lieutenant Colonel in the U.S. Cavalry, during which time Colonel Lee distinguished himself as a Scout and Engineer.  Robert Lee, the county seat for Coke County which was founded in 1889 and is named for Richard Coke the Fifteenth Governor of Texas.  The area of Coke County from 1700 until the 1870’s had Comanche, Tonkawa, Lipan Apache, Kickapoo and Kiowa Indians roaming the Colorado River.  They settled  in the rock shelters of the  river and creek valleys  leaving behind huge numbers of artifacts,  caches of seeds, implements, burial sites,  Petroglyphs (Rock Carvings),  river shells, turkey & deer bones, flint knives, scrapers and points.

The Radde Ranch sits in Coke County right across the Sterling County line and has been in their family since the late 1800’s. It’s a working cattle ranch with some of the finest red Angus cattle you will ever feast your eyes on.  Benny, the owner also has some great whitetails, turkeys & hogs.   We were invited by Benny to come and hunt his place and, of course, when you have the opportunity we take advantage to hunt such a treasure.  So, late October we went up to scout and put some stands up if necessary  but, the biggest reason was to take advantage of the rut.

Wayne and I had a quick visit with Benny and by 6:00 pm were in the Tri-Pod stands he had picked out for us.  This place is a low fence deer factory. In a short period of time we had doe’s and fawns all over us.  We were hunting an area that Benny had run a line of corn down a sendero and around 6:30 we had 2 nice bucks feeding thru, filtering out of the cedar brakes browsing on forbs, acorns, & the “Yella Akerns”. The evening just flew by however we never saw anything we considered a shooter.  We did see a lot of deer but, not the mature bucks, at least 8 Points or more and a minimum of 5 years old.  Benny is going to have some monster free range bucks in the years to come though.

As we returned to our Polaris, “Lightning had struck the Outhouse”! This ranch is covered in Flint, razor sharp rocks and we had a flat front tire.  Now we were in the dark putting a plug and adding ‘Fix a Flat’ to air up the tire.  NOTE:  never go anywhere in an ATV unless you have tire plugs, ‘Fix a Flat’ and/or a source of air.  We made it back to the camp house and supper was ready.  Benny had fired up the grill, the steaks were perfect with baked potatoes and corn on the cob. We had a great visit along with lots of talk about the bucks we had seen and those we expected to see coming up.  Then off to bed with visions of monster bucks walking out to be shot

We loaded up the Polaris and were  off by 6:00 am  down into the  creek bottom to a huge Hackberry were we had two Woodsy Too hanging stands ready to go.  We could watch several different major trails and a creek bottom  with a maximum  shot of 30 yards as the deer and hogs  filtered in and out going  to the feeding  or bedding areas .  I will NEVER forget this incident as we walked into our stands.  Wayne had used an EWT red light to walk in and I was using an EWT green light. Up into our stands we did climb, I had just put an arrow on the string and hung my bow up.   Without a sound a soft green light covered us and the tree we were sitting in for about 20 seconds. At first I thought my EWT green light had come on in my pocket but, I knew better.   When the green light went off I did not know whether to jump out of the tree and ‘haul ass’ or sit still hoping Wayne did not see the same light  that I had.  Wayne brought me back to reality asking, “Jim, did you turn on your green Light?”  My answer was “HELL NO!”  There we sat wondering what had just happened. Even today I have no answer as to what or who bathed us in that green light.

That morning was full of excitement. Turkey’s had roosted in every tree around us, hogs were moving under us and I rattled in 6 different bucks. Three, were too young to shoot but the other three were really good bucks in that 130 to 140 inch class.  They came fast and furious but before they got to any open area to give me a shot they hung up and would walk around in the brush looking for the fighting bucks they thought they heard. When these bucks did not see any deer standing around or fighting they just melted back out without any opportunity to shoot.

We sat till 10:00 am and still had deer moving. While we watched and hoped, we were treated to the sight of a Kestrel hovering over a fox squirrel trying to catch him. He tried this maneuver on several different occasions but was never successful.  What a morning.  A green Light that we could see and never explain, deer, turkey and hogs all around and sparrow hawk kestrel trying to catch his breakfast.  We returned to camp with lots of stories.  After a huge breakfast we packed up our gear to return home.

We returned on the 18th but it was too late to hunt so we went out during the night and set up our ground blind along a scrape line on a flat ridge where deer were coming up out of the valley.  The rut was in full swing and we were in our blind at 6:15 am with a healthy spread of ‘Yella  Akerns’ out for about 30 yards along a sendero, to attract the ladies in and hopefully bring in some bucks. As the early dawn light grew we again had deer all around us. Let me tell you it was cold but I had plenty of body heat going from all the excitement of seeing so many deer.   I had sprayed down with                  Nose Jammer, our protective blanket from spooking the deer and it paid off, as usual.  One time we had a doe and fawn walk to within 10 yards of the blind, constantly tiptoeing to see what was inside that funny new brush pile.  She would do everything she could do to get us to move like stomping her feet. You name it she did it!   It was all I could do to keep from jumping out of the blind and scaring the doe out of her birthday suit. At one time we had 7 does and 3 different shooter bucks within 30 yards.

The bucks were moving toward us but, they sure were taking their time.   I just knew any moment one of those does would see something they didn’t like and bolt out of there taking the bucks with them.  Finally, the biggest buck, a heavy horned 8 pointer, for sure a 5 or 6 year old with a saggy belly and rummy eyes eased over to a doe that was in estrous and started to pushing her toward an open area.

Wayne advised that he was on him, thumbs up, as the buck moved from my right to left. Carefully and deliberately I drew my bow and settled my single pin on that spot just behind the elbow of the front leg.

The arrow was off, followed by a loud ‘whack’. Those back legs flew out like a bucking bronco.  Deer were running in every direction at once. The payload of a 1 ¾ inch Afflictor K4-Hybrid & Victory RIP TKO – 300 had done its job. Then, as always after a killing shot, I got the shakes!  The day I stop having those tremors, I will quit bowhunting.  Lots of laughs, back slapping and congrats.  We waited for the longest 20 minutes in history before walking to the spot where I had shot the buck. There we found gouts of blood on the ground and my arrow 15 feet on the other side.  70 yards later we found my buck completely bled out.   One of the reasons for our success at Tex Mex outdoors is the high quality equipment we use. 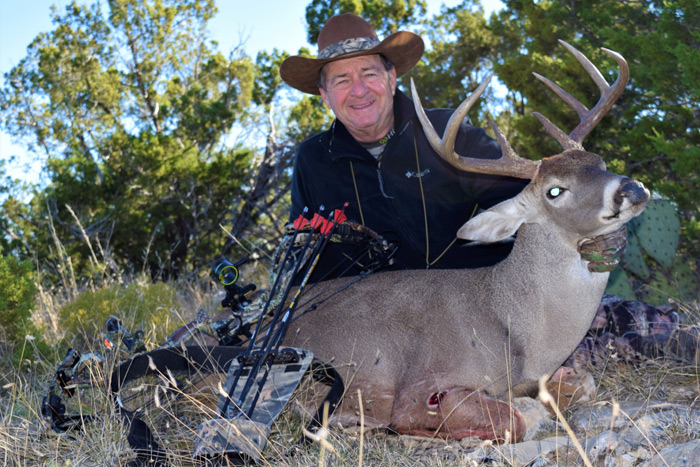 This native buck was a dandy, green score 130 inches / 6 years old.  We want to thank Benny Radde, for his hospitality and great friendship.  If you’re looking for a great bowhunt for free ranging deer give Benny a call at (325-277-3143). I know he would be glad to visit with you. He only offers limited hunts so you may want to make that call today.