The Feathers Of The 4 Wild Turkey Species: What’s The Difference 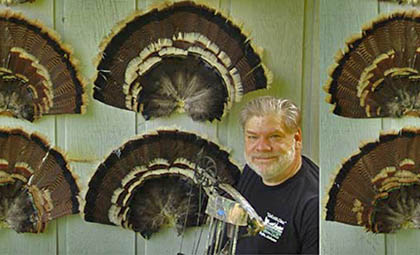 I put my wild turkey tail fans up on the side of my garage for a picture so you could see the difference. 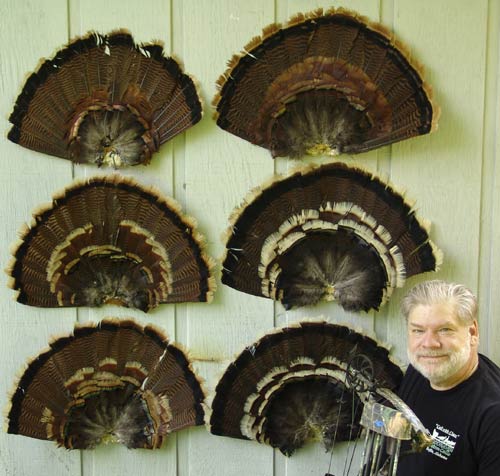 Fred Lutger with tail fans from all 6 of his Spring gobblers.

This picture shows the difference of the four wild turkey species. The top left tail fan is from one of my Florida Osceola wild turkeys. You can see how it is a little smaller than the other fans. I have found this to be true with the other Osceola turkey fans I have. It also has very dark coloration compared to the other species.

The top right fan is my Eastern. Again note the coloration. Bottom left is the Rio Grand turkey and bottom right is the Merriam’s. The Merriam’s is by far the bird with more white coloration then the other three.

Also, I took pictures of the turkeys’ wings so you could see the difference in the wing feather coloration. The biggest contrast is the difference between the Osceola with its very dark feathers compared to the Eastern with the lightest coloration.

The Florida Osceola wings are a very dark color with light bars of gray. The Rio is very similar with wider bars of light gray. The Merriam’s and Eastern are almost identical. mostly light gray with dark bars, just the opposite of the Osceola. 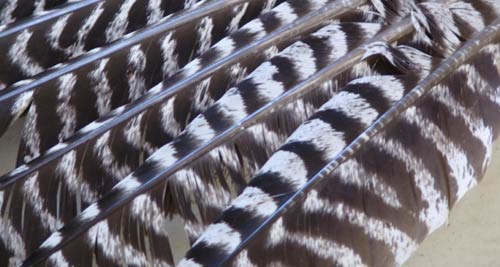 Wing feathers from the Eastern and Merriam’s are identical.

Wing feathers from one of Fred’s Rio Grande gobblers.

The Florida Osceola gobbler has the darkest wing feathers.

Why I Hunt – Hannah Barron