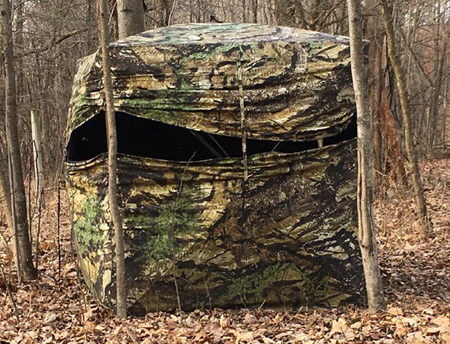 I had been shooting all summer getting ready for the Minnesota bow season.  Again this year I vowed to not shoot any does but any buck would find my arrow.  Two weeks before the season I set up two ground blinds in good looking locations, one behind my house and one on some land I own north of my house.  I was going on a bowhunt in Missouri on Sept 19 and I did not want to deal with a deer if I happened to get lucky on opening day, the 16th, so I would wait until I got back.

Things were going to be different this year for me.  My wife had retired and was going to be home all day and would be able to take me out and help get me set up.  In the past I was doing this alone and it was starting to be a real hard chore.  Loading and carrying everything on the electric wheelchair, setting up a decoy and trying to get into the blind was getting harder for me to do by myself. The extra help was certainly appreciated. 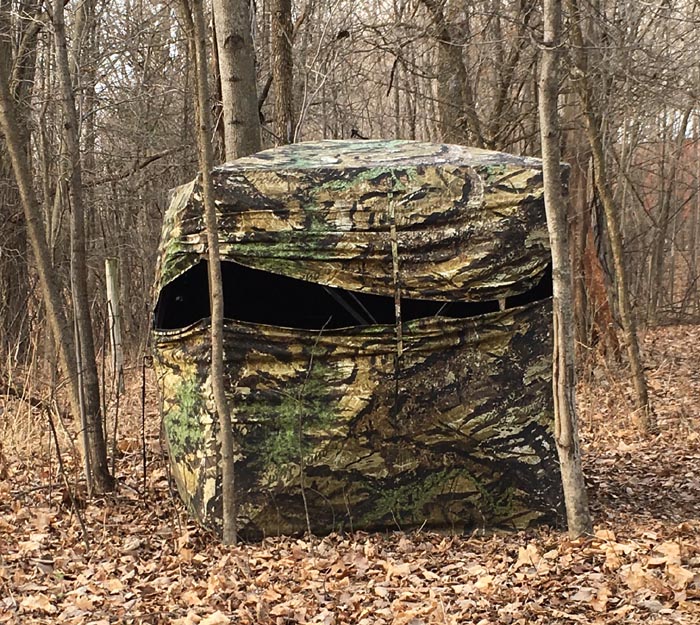 There had been a doe with two fawns and a doe with one fawn in my yard all summer.  It was fun watching them grow up, play with each other and run around tearing up my lawn.  The five of them were constant companions all fall. They seemed to know they had safe passage.  It was good to always be seeing deer even if it were ones I was not going to shoot.  I had a nice looking buck circle my blind three different times but never got closer than 70 yards and in the thick brush I never got a good look to see how big he was.

One afternoon I went out early, set up the decoy, put out scent and got into the blind. I was going to try calling and rattling to see if I could get some action.  I picked up the horns and was just going to smash them together when I looked to the left and there was one of the fawns 20 yards away.  I quietly set the horns down and waited for the action to start.  The other fawn popped out of the brush followed by the doe.  The buck fawn was staring intently at the decoy and was slowly and cautiously approaching it.  The doe and other fawn were checking it out but they moved past it.  When they were about 50 yards another doe joined them and the little buck ran out to rejoin the group.  As I was watching them I noticed movement in the swamp to my left.   I got the binoculars up and saw a good looking buck coming.  I grunted, he saw the decoy and started walking my way, I picked up the Ten Point crossbow and got ready for the shot. 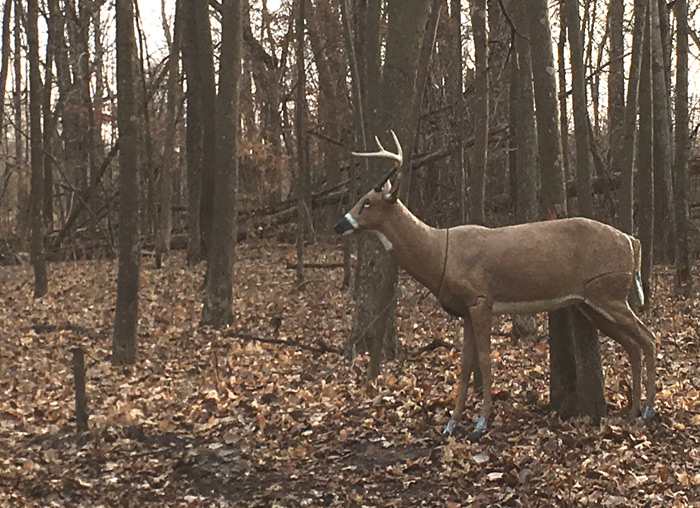 He had a tall, wide rack and this was the one I was going to shoot.  As he was coming into range I caught some movement to my right.  Here came a scrawny rack four point to check out the decoy.  I thought this was going to be fun to watch. As they got closer they saw each other and laid their ears back, the hair on their back bristled and they started pawing the ground.  I thought I was going to see buck fight.  I think the little four point wanted to beat up my one horrned decoy but figured it wasn’t worth the fight. After his little show of force he thought better of it and walked away. I looked back at the bigger deer and saw that while his rack was high and wider than his ears, he was only a 1 ½ year four point.   I thought he would be a dandy deer in a couple of years and decided to let him walk. I turned to focus on the little four point but by then he was out of range.  With all the action it was an exciting evening.  I still think about that four point, should I have shot him or not and it still gets me but I don’t regret my decision.  With rifle season coming up I hope he makes until next year.

On another day my son Justin and I went to my northern property.  It had been a wet fall and the path to the blind was muddy.  The two mile trek by four wheeler going through two feet of water and mud was difficult but we made it to the blind.  Justin helped me get set up and then went to his stand.  I had been in the blind about an hour when I shifted to look hard to the left.  The folding chair I was sitting on sank in the mud causing me to lose my balance and off the chair I went down onto the wet and muddy ground. It was 25 degrees out and now on the ground with wet pants and getting very cold.  I could not push myself back up because of the wet ground as my hands would just sink in the mud.  This was not a good situation for me to be in. I got out my cell phone and texted Justin letting him know I needed help right now.  I got no response so I called, again no answer.  I didn’t know what to do but I did know I was in some serious trouble.  If I didn’t get some help, I was going to freeze to death right there.

Laying in the mud, wet, cold, unable to get up and not being able to get a hold of my son, things were not looking good. My mind was going 100 trying to figure something out when I heard the four wheeler. What a relief.  Justin got me back on the wheeler and we made a mad dash to the truck.  Looking back this could have been a disastrous situation for me, thank God for cell phones.  As a disabled hunter I always seem to get myself in bad predicaments but fortunately have found a way out. I have dodged the bullets so far, am I lucky or just have a strong sense for survival.  In the future I might not be so lucky so I just have to plan smarter and quit doing stupid things. Now, about that buck.