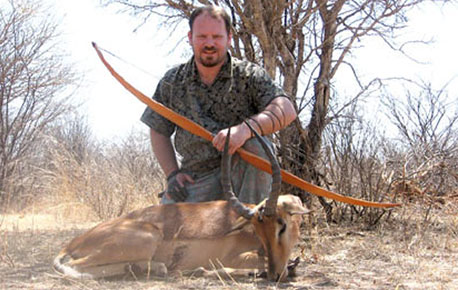 By the time I turned off the tarred road and onto the dirt, my mind was full of ideas of what was to come. As I drove alone through the typical bushveldt, I could not help but feel a little like one of the first pioneers, although I enjoyed the lazy idle of the 2.4 diesel and the comfort of the crunch of rubber on the dirt road, rather than a horseback ride and everything that goes with it. Then again, it also sounded rather romantic.

Yes, you guessed correctly, I was on my way to a hunt, to seek a piece of myself; a piece I had lost to life in the city. It was a precious piece I would need to face and overcome the dark days of urban stampedes on the road to nowhere. Here is power in quietness, strength in a moment with oneself. I could already feel it flowing through me, comforting me in its abundance.

As I entered the gates of Kudu Lodge, George Potgieter, my host, stood ready to greet me with a friendly handshake. A burning fire awaited me at the lodge. That night I slept like a child, and dreamed like one too.

The song of birds awakened me the next morning and after a quick cup of coffee, I was on my way to the hide with Eddie, then my PH and now also my friend. I felt time making room for a new type of order that is so much deeper and timeless; I could feel freedom’s call luring me to being wild again.

My mission: to hunt my first warthog and, if possible, a jackal. According to those in the know, these two animals are among the fastest “string jumpers” in Africa. “Geelslang” and I, on the other hand, are not so fast, so I had to concentrate on accuracy and hope that the slower arrows would be quiet enough to beat the prey. The fact that I had just come from a 3D traditional shoot helped a lot.

Sitting in an elevated hide that morning gave me much pleasure. I was blessed with sights of eland, blue wildebeest, impala, monkey and an abundance of birds. I had the idea that this was how it must be in Paradise, to be near to all of God’s creation and our Maker’s Hands.

Before long it was time to feed the beast within. After a great meal and a few shots at the butt next to the lodge, we were off to another elevated stand where Eddie said we would see some warthog. It was hot by the time we got there, but within a few minutes all kinds of small animals showed up. I took great pictures of birds, a leguan and one of the most beautiful sunsets I have seen in a long time.

Just after sunset, Eddie signaled to me to get ready, because the guinea fowl had suddenly reacted to something towards the back of our hide. I quickly put the camera away, took “Geelslang” off the bow hook and nocked an arrow. Isn’t it strange how rapid one’s breathing becomes in situations like these? I was actually hoping for a warthog, but then I saw a jackal approaching the waterhole.

Funny how doubt first kicks in, and I had to fight off this new hobby of mine called “buck-fever” as well. I took a few deep breaths and focused. The animal was tense and I waited for him to take his first drink. I could see the jackal relaxing a little. He was not happy with his decision to be outside while there was still daylight available. As I drew to anchor, I imagined how the jackal would react to the approaching arrow, and instinctively compensated for it.

As I released and watched the arrow’s trajectory, I thought it would be a total miss. But before it was halfway to its mark, the jackal moved. It jumped sideways to the left and started to turn left, bending almost double to get away. The 500-grain arrow  penetrated through the vitals. He ran for 50 yards before expiring. A perfect shot, and a perfect day.

Later that evening, as I sat alone and reflected on my actions and experiences of the day, a great sense of awe came over me. First of all, I came to a deeper sense of respect for the creatures God has given us to manage and look after. Even the jackal, in his death, gave me perspective on life and a greater self-understanding in the puzzle of His greatness. It awoke something inside that urges me to protect, care and love.

Secondly, if I think of the skill I have to shoot the bow as I did on that day, and it is given to me by grace alone, and I think about all the other struggles I still have to face while passing through this life, I cannot but help notice that I am not alone. There is, and always will be the graceful and helping hand of God, which shall guide me through it all. Also, He already built into me every skill I will ever need to overcome all the tough times that may lie ahead.

At dawn the next morning, we were on our way to a beautiful pit blind that stood under a large group of trees and featured a lovely pond. Before long, the first birds and small animals started to come in. I’d learned that while sitting in a blind you never make yourself visible to the small animals because they create an atmosphere that tells the larger ones it’s safe.

The next moment a kudu bull came into full view, then two more showed themselves. They came closer until they stood at five yards, so close I could even count their eyelashes. What a beautiful sight. After a while two warthog sows came to play on the other side of the pond. As I wanted to shoot a boar, they only made up part of the show.

At that stage I thought that it could not get any better. Scarcely had I finished that thought when in came about 60 impala, which helped me to get out of my dreamlike state and get “Geelslang” ready for action. It took some time to get a clear shot on a specific ram, but patience paid off. Although I must admit it was strange to hunt at six yards, it helped to contain the shakes.

For the rest of the day we sat in an elevated hide and waited for the elusive warthog boar, but he never showed up. So I guess that must be a surprise for another day. As we walked back to camp that evening, I could not help but feel that my cup was overflowing with joy and fulfillment. On the way home there was a song in my heart, praising God for life and beauty.

For by grace we live, by choice we are free and by beauty we care.

Third Time's a Charm! Part I