If A Tree Falls In The Forest… 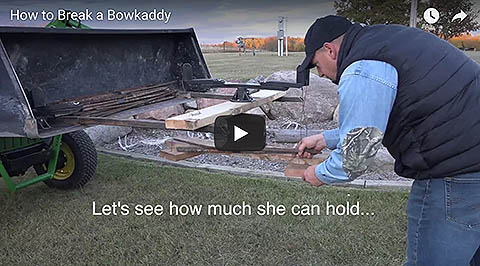 If a Tree Falls in the Forest…

by Arliss McNally of Alaris Concepts, maker of the BowKaddy

This “life and death” true tale is well known around home, thanks mostly to my wife who has vowed never to let me forget it.  The story is a few years old now but, for anyone who has ever spent any time in a treestand, truly one worth repeating.

The Spring of ’96 began with the usual bear-baiting trip to the Cold Lake area of northeastern Alberta.  Three hundred pounds of meat and twelve hours later, we arrived back home leaving four overflowing bait barrels in our wake.  The season may have started quite routinely, but I was in for a real barn-crasher on the final sit of the year.

Despite her fear of heights, Karen (my fiancée at the time) accepted my invitation to share a 5-year old bench stand overlooking an active bait for a few hours in the evening.  The night before, I caught a glimpse of a beautiful cinnamon boar which frequented the bait.  I was hopeful that this final sit of the year would find him within shooting range.  Even if it didn’t, I was glad to show Karen a small piece of a big part of my life.

Except for a couple squirrels, early evening was rather uneventful, but passed quickly nonetheless.  The sun was bright and the air was calm…the kind of calm that makes people in the southern tornado belt begin to worry.  But it was springtime in Alberta, and we didn’t give it a second thought.

“How much longer are we gonna sit?” Karen asked, taking note of the approaching darkness in the west.  “It’s gonna take me some time for me to navigate those tree steps when the time comes.”

My response came from the determined hunter facing the possibility of not tagging a bear that season.  “If he doesn’t show in half an hour, we’ll head back to the truck.”  In hindsight, it SHOULD have come from the concerned boyfriend who was “in tune” with her situational anxiety.  Five minutes later, a menacing wall of wind came rushing through the woods.  It was obvious from the flattened shrubs and kamikaze leaves that our sit was over.  Suddenly a large tree about 50 yards away came crashing to the ground.  “This is gonna be a good one,” I thought to myself.  I tied my bow and backup rifle to the rope and hastily descended the tree supporting my end of the platform.  “You’ have to climb down…I’ll talk you through it,” I reassured her as I untied my weapons.

“I can’t do it!” she exclaimed.  Her words were drowned out by a sudden loud “CRACK” which came from the base of “my” tree.  I looked up to see a less-than-vertical poplar and a less-than-impressed woman hugging the tree on her side of the stand.

“You’re going to have to jump,” I replied with some conviction.  The leaning tree on my side was still connected to hers via the wooden bench which was swaying unpredictably.

A few hesitant moments passed as she faced her fear.  With a silent scream and a prayer, she stepped off the base and landed in my arms fifteen feet below.  She buried her head on my shoulder to soak up the tears.  Within seconds, the second poplar tree succumbed and the whole treestand crashed to the ground right beside us.  I grabbed the gear and we raced back to the safety of the truck, dodging hailstones and falling trees all the way out.

We sat in the relative comfort of the cab, watching the storm pass and pondering the surrealism of the situation.  That treestand had stood proud for almost 50,000 hours and we had to be sitting in it during its final hour…what are the chances?!

I did learn one thing from that experience, though.  If a tree falls in the forest and your wife is sitting in it, you’re going to hear about it for a long, long time.

Arliss McNalley is the owner of  BowKaddy

What Are Your Chances?

Speaker Announced for The Greatest Hunters’ Convention on the Planet™!

Speaker Announced for The Greatest Hunters' Convention on the Planet™!

Skin And Quarter A Deer Without Removing Its Guts.