Papa BEAR: Chap 3: The Inside Scoop 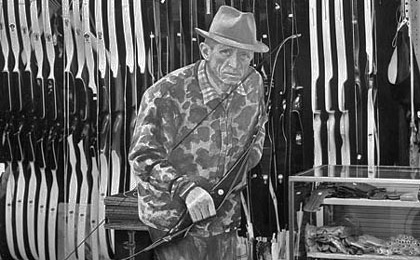 During my first few months with Fred, I simply managed the advertising plan that Bonsib Advertising and Tom Blee had set out prior to my joining the agency. But for 1967 I wanted to do something unique that would be a traffic builder for our Bear Archery dealers. I also wanted to make my mark with Fred, Bob Kelly and my new employers at Bonsib.

Having deer hunted a bit with my dad and uncle Jack Ream as a teenager, I knew that there were certain things that people were supposed to do and not do in the woods when hunting. And as I thought of that, it occurred to me that I could build an entire promotion around all of the knowledge that Fred had accumulated over his many decades of hunting, especially his 30 years or so of bowhunting up to that point.

While Bear Archery distributed all of Fred’s exciting bowhunting films through the Grayling Film Service that later came under my wing, and while there were articles about Fred running in many of the archery and general outdoor magazines, Fred didn’t directly share his knowledge within those films. What made him the most successful and most visible hunter in the world? I figured that people would want the inside scoop directly from Fred.

In addition to this, filmed hunts are totally different than a hunt done quietly in the woods by a solitary hunter who knows what he’s doing. When Fred had a film crew along, he was at a huge disadvantage. He really could not move the way he wanted to, nor do any of those other things that are so necessary to a successful stalk and shot. All bets are off on a bowhunt when you have a cameraman, soundman and a producer tailing you and calling the shots.

In addition, Fred always had to look like Fred Bear in his films. He had to wear his trademark Borsalino hunting hat. He couldn’t wear camo face makeup, and shots had to be set up and taken with certain camera angles. These are all great handicaps for a bowhunter, but are necessary when one was making a film in those days or a video in today’s era.

We also needed something that the hunter could hold in his hands and listen to at his leisure, over and over if he so desired. You must remember, this was before the days of videotapes, audio cassettes, VCR’s, DVD, etc. The only recordings were bulky reel-to-reel quarter-inch tapes that were not within the price range of the average hunter. Only long-playing records offered us an opportunity to get Fred’s secrets across. In those days most homes still had record players as part of their living or family-room sound systems.

Thus, when I wrote up our suggested advertising plan for Bear Archery for 1967 I proposed the production of a couple of long-playing records to cover Fred talking about several topics. Believe it or not, I still have a copy of that original memo that I wrote on Aug. 19, 1966, to Tom Blee and our public relations director, Budd Arthur, about the idea. And I specifically noted that these records would tie into our “Become a Two-Season Hunter” theme. My proposal actually covered the production of two records, with two sides each. One record was to cover Fred’s tracking secrets, the other record was to cover his secrets of bowhunting on side one, and his tips for successful stalking on side two.

Like so many ideas, when we actually sat down and talked about it some more, including the economics of it all, it evolved into the production of just one record for our promotion. By mid-October we’d given it the name of “Fred Bear’s Secrets of Hunting,” and I’d fleshed out the idea more for a more structured presentation to Fred and Kelly. You’ll note that the title was not “Fred Bear’s Secrets of Bowhunting,” but rather, “Secrets of Hunting.” This broadened the appeal and market to include all hunters, not just bowhunters.

I kept thinking of something else we could do to tie-in with the forthcoming “Secrets” record. I wished that Fred could visit every dealer archery shop to promote the record, and, suddenly, I thought of doing a life-sized Fred Bear cut-out. Now, 36 years later, there have been many life-sized cutouts used in promotions; however, back in the ’60’s the idea was fresh, and not too many of them had ever been done.

When Tom Blee and I presented the ideas to Fred and Kelly, they immediately liked them. Kelly expanded upon the idea by suggesting that we tie the life-sized Fred Bear and the record promotion into the introduction of their new Super Kodiak bow along with the rest of their 1968 bow line. “Nothing can stop the force of an idea once its time has come,” as an old philosopher once said. The idea then evolved further at both our advertising agency’s creative department in Ft. Wayne, as well as up in Grayling among the folks at Bear.

Kelly and his sales staff in Grayling designed a new Products Package that a dealer would have to order, including the new bow model. The dealer would receive the life-sized Fred Bear free with the order of a Super Kodiak bow or 100 “Secrets of Hunting” records.

By doing so, the dealer would receive a listing in our national regional edition advertising to be run in the major outdoor magazines—Outdoor Life, Sports Afield and Field & Stream. Bear began signing up dealers, and we began writing the ads in Ft. Wayne and developing additional point-of-purchase material to go along with the ads and the life-sized Fred Bear. These national outdoor magazines were selected since firearms hunters, not just bowhunters, read them.