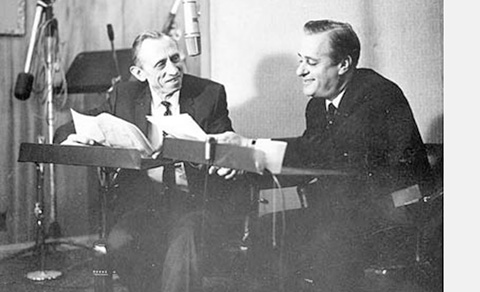 Meantime, Fred pondered what all he should cover in the record. As the idea progressed, we realized that just having Fred talk would be pretty boring, so we decided on the interview technique. Then came the problem of who to have doing the interviewing. A name personality would help sell the record and give it greater authenticity.

Our radio/television director at Bonsib, Gene Dennis, suggested that, since Fred had been on ABC’s “The American Sportsman” a number of times, perhaps we could get the show’s host, Curt Gowdy, to do the interviewing. Curt at that time was the hottest sportscaster in America. He was being touted as the lead announcer for the coming 1968 Olympic Games for ABC, the official voice of AFL professional football on NBC, and had been named Sportscaster of the Year. Curt had become an icon as the host of “American Sportsman” during a time when television networks weren’t intimidated by anti-hunters.

We bounced the idea off Fred and Kelly, and they liked it. Gene and Fred approached Curt and his people at the network. Gene was a known personality in the broadcast business, having gotten his start in Kansas City where he lived in the same apartment building as another young broadcaster by the name of Walter Cronkite.

The result of all of this pre-planning was that one day Fred and I climbed aboard a TWA flight to Los Angeles where we met Curt Gowdy and Gene Dennis at the Hollywood Roosevelt Hotel on a Sunday evening. As I recall, that day Curt had been broadcasting a San Diego Chargers football game, and Gene had been elsewhere on Bonsib business. Our old friend, photographer Jim Pond, also flew in from Dallas to take the record jacket cover photo for us.

After going over our approach at dinner, we all journeyed out to the Henry Russell Recording Studio in Hollywood the next morning and spent a full day cutting the record. Both Fred and, of course, Curt were very experienced at this kind of thing. Fred had been the guest on many television and radio shows by that time, and Curt, the “Old Wyoming Cowboy,” was a seasoned professional. The session went very well.

I really just stood around in the recording studio along with Gene Dennis off to one side as Curt and Fred followed a script that had been roughed out ahead of time, offering a few minor suggestions as we went along. Later, after the recording session, we drove over to Fess Parker’s Hollywood sound stage where his “Davy Crockett” television program was in production. Fred and Fess had hunted together in British Columbia on one of the “American Sportsman” segments, and Fess had agreed to let us use part of his set for still photography. We watched them film part of a “Davy Crockett” episode, and then when they shut down for the day, we went to a corner of the sound stage set and shot the photo for the record jacket cover in a woodland setting.

We spent the next day in the recording studio editing the tapes into a final cut for the long-playing record. Then the master tapes were sent to the record company to be pressed. Believe it or not, after almost 40 years I still have those original tapes at home where I put them for safekeeping so many years before.

As part of our follow-up promotional package, I came up with the idea of a full-sized newspaper format broadside to be sent out after the introductory phase of the “Secrets of Hunting” promotion. I wrote and formatted the piece on my dining room table at home on Salge Drive in Ft. Wayne. I called the broadside “The Buck Bellows.” It contained news about the promotion for dealers who were not yet participating. It also detailed the Super Kodiak bow’s features. And it pointed out that our life-sized Fred Bear was so real-looking that one night a German shepherd guard dog in a sporting goods store came around a corner of the hallway face-to-face with the cut-out Fred Bear and immediately attacked the intruder and tore it to shreds!

And in Oklahoma City an elderly near-sighted lady became very indignant when one of Andy Anderson’s “clerks” failed to answer her second query about where something was in the store. She had been talking to Andy’s life-sized Fred Bear display.

Budd Arthur and I made one trip together to New York City upon the completion of the “Secrets of Hunting” record. We took copies of the record to the producer of “The Tonight Show” for he and Johnny Carson and then sat in the producers’ seats for the show. We also called on the media in New York on that trip promoting the record and the sports of archery and bowhunting. Archery has been featured on “The Tonight Show” numerous times since then.

In all, our Bear Archery dealer network moved 60,000 copies of that unique “Fred Bear Secrets of Hunting” record aimed at two-season hunters. Many years later we converted it to a tape cassette and sold it through the Bear Archery catalog. 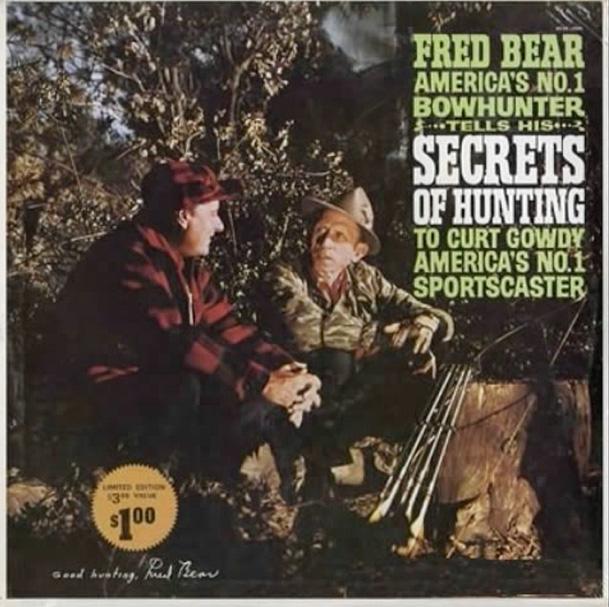 If you ever have a chance to listen to Fred’s advice on the tape, I’m sure you’ll appreciate a few of the master’s hunting tips. One in particular that made a lot of sense to me is that while still-hunting a deer it is important to crouch down often with your eyes below the foliage line and search for parts of the deer. Don’t look for the whole deer. Just a pawing foot, a snout, an antler. The same when scanning the cover when you’re standing up or walking, just look for an off-color patch in the woods, look for just a part of a deer. And stand still and watch more than you walk. That’s the way most deer watch for predators.

On Dec. 6, 1968, Fred and his hunting companion, Bob Munger, left for Marajo Island in the 200-mile-wide mouth of the Amazon River to hunt jaguars. The day marked my 33rd birthday, and I was busy at my job at the Bonsib Advertising Agency in Ft. Wayne working on Bear Archery business. Unfortunately, one of the rainiest seasons in years wiped out any hope to hunt one of those elusive cats, and Fred and Bob instead shifted their focus to the wild transplanted Asiatic buffalo that roamed the jungle. The horns on these buffalo would spread to 5 feet wide, and after a week of hunting, Fred was finally able to down one with his bow. It weighed about 1,800 pounds, and its horns spread more than 5 feet.

Also in 1968, Fred’s first book, “The Archer’s Bible,” was published by Doubleday as part of its outdoor series. Over the next 15 years this book sold more than 400,000 copies. I updated and revised the subsequent editions of that book for Fred and Doubleday. Matter of fact, my photograph taken at Grousehaven of Fred with my son, Scott, and Scott Fling, son of our Bear Archery sales manager, was used on the cover of the last edition of that book.

Fred’s forays afield had launched his archery business to new heights and had paved the way for books, records, television shows and more. By 1968, Bear Archery and Fred Bear seemed unstoppable.

Give Them What They Want

So, What Are Bears Doing Now?