I Remember Papa Bear: Chapter 2b, Bonsib And Fred

by Robert Hoague
in Bowhunting Posts
0 0
0 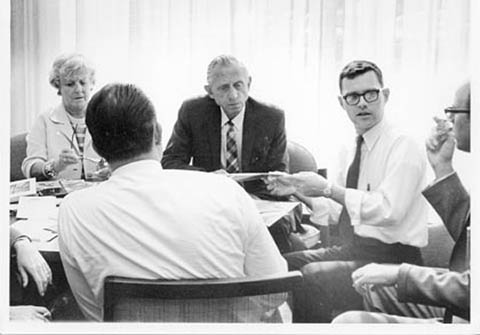 Fred had hunted polar bears twice before, in 1960 and 1962. One bear plunged through the ice after being arrowed and was lost. Another charged, and Fred’s Inuit guide had to stop it with his rifle. It dropped just nine yards from Fred and could no longer be considered a bow and arrow kill. Finally, in April 1966, Fred headed north again, this time with a film crew from the ABC-TV “American Sportsman” television program. Film star, Cliff Robertson, who had just portrayed John F. Kennedy in the movie, “PT-109,” also went along on the trip.

Fred and the group arrived in Alaska on April 19. They camped out in tents on the polar ice, sometimes with temperatures of minus 30 degrees and windstorms of about 30 knots for almost a month and never saw a polar bear. Cliff Robertson had to leave for another engagement on April 28, but Fred, his hunting buddy, Bob Munger, and the film crew stayed at it. Finally on May 11, after 25 days on the polar ice, Fred was able to down a polar bear with his bow. This time the bear neither fell through the ice nor charged the hunters. It counted as a bona fide bow and arrow kill.

It was evening, just a month or so after Fred got his polar bear, when Tom Blee and I pulled up in front of the Bear Archery plant on my first visit. I was almost physically sick I was so nervous. I knew that if Fred and his sales director, Bob Kelly, did not like me, I would not be asked to work on the account. Then what would happen? I had heard from Tom on the drive up about Bob Kelly, a fiery Irishman, who was a stern task-master. So in addition to meeting a legend, I was about to meet a marketing dynamo. Both scared me half-to-death. Was I up to the challenge?

Fred, Kelly and Charlie Kroll, Bear’s advertising manager at the time, who was also Fred’s son-in-law, had come back after supper to meet with us. I was introduced first to Charlie, then to Kelly and finally taken in to meet Mr. Bear. His huge paw swallowed mine when I shook his hand, and his clear blue eyes looked deeply right into mine as we were introduced. After Tom and Kelly got us settled, they left the room to talk about some of the advertising plans we had driven up to talk about, including inserting a photo of Fred’s recent polar bear trophy into the back cover of the 1967 Bear Archery catalog already in production. It really looked out-of-place on our back cover, but it was shorthand to America’s bowhunters that Fred had finally downed a polar bear with his bow. In 1966 Fred was also inducted into the Sporting Goods Hall of Fame and was a guest on the “Tonight Show.”

When Tom and Kelly walked out of Fred’s office I was left to squirm in my chair. Fred asked me to tell him something about myself. And I briefly did, including the fact that while I loved the outdoors, fishing, camping and the like, I was more of a fisherman than a hunter. Other than the couple of deer hunts I had gone on earlier with my dad and Uncle Jack, I really was too busy working and getting started in my career in advertising and public relations to go off hunting on my own.

Fred seemed to like my honestness, and we discussed a couple of things we’d be working on together. After mentioning these things, Fred realized that I had not written anything down and he pulled a small spiral notebook out of his shirt pocket and told me that he wanted me to start carrying one. He said there was no way I could possibly remember everything that we’d talk about in the future and that he had found that carrying such a pocket notebook had always been a good thing to do.

Almost four decades later I still carry one every day, even though I am now retired and almost 70 years old. Fred then said that he didn’t really know if I’d work out, but that he would give me a chance to work on his account. I said that was fair enough. We shook hands on it and that was that!

GETTING DOWN TO BUSINESS
Little did I know that before it was over both Fred Bear and Bob Kelly would end up treating me like the son they had never fathered. Kelly had an adopted boy, Mike, and an adopted daughter, but neither man had any natural children of their own. Mrs. Bear raised a nephew, Mike Steger, whom she considered a son. Fred liked Mike, who taught at the Air Force Academy and later worked in the space program, but neither Kelly nor Fred really had someone they were around everyday at that stage in their lives that they looked upon as a son. Kelly had recently gone through a divorce and remarriage prior to my first visit to Grayling. He and his adopted son never really seemed to relate too well to one another.

But all that relationship with the two men was off in the future. Fred took Tom and me out to see the foundation being laid for the new Fred Bear Museum while we were in town. I left Grayling the next day with Tom, after those first meetings, pumped up and excited about what lay ahead of me with Bear Archery and in the archery industry.

The Fred Bear Museum was a very successful Grayling venture for many years, logging about 150,000 visitors each year. It was a beautiful facility with a huge trophy and artifact room at one end with a cathedral ceiling, a fully stocked archery pro shop and gift shop at the other end, and a good-sized theatre upstairs in an A-frame design. Fred also had a small hideaway on the second floor. Just outside the pro shop doors there was an outdoor archery shooting lane for people to try out Bear Archery products. The museum opened to the public in September 1967, with two huge fiberglass bear replicas guarding the entrance. Alaskan totem poles framed each side of the entry.

Bonsib’s Mike Haller and I, along with photographer, Dale Stedman, of Ft. Wayne, went back to Grayling and photographed the museum and its contents shortly after it opened for a well-received Fred Bear Museum booklet. Fred and Mrs. Bear journeyed to the Bonsib Advertising Agency offices in Ft. Wayne, Indiana to approve the final copy and design. The copy had been written by the agency’s Bill Aurelius, who wrote much of the Bear Archery advertising in those days prior to my move to Grayling in late 1971 to open the “in-house” advertising agency for the company. Aurelius was a very talented writer and a super guy. Frankly, I learned a great deal about copywriting from Bill that I later applied when I opened the in-house agency for Fred and later wrote all the advertising myself. I had taken a course in copywriting in college, but nothing beats doing it out in the real world with real products that one is responsible for promoting.

One adventure probably better not told involved what happened to Mike Haller and I the night prior to the photography shoot at the new Fred Bear Museum in Grayling. We were staying at the old Au Sable Motel. Mike and I were sharing a six-pack in the motel room when I asked him if he’d like to see where I had been out bowhunting with the guys from Bear Archery.

We piled into the old, heavy, Bonsib Buick and headed west toward Camp Grayling, the permanent National Guard Camp just outside town and west of the Fred Bear Museum. We drove in the dark west of the camp roads toward Sharon Trail and then along it until we reached the area where I had been bowhunting. Wanting to show Mike where the deer had been crossing, I decided to just drive a bit farther down the sandy road that was all torn up by training tanks. As I said, the Buick was heavy, and the sand was deep, and before we knew it we were stuck. No amount of rocking the car back and forth would work, and we knew that we had to abandon it and head to the Camp Grayling headquarters area many miles to the east over the rolling hills in the dark of the night. We did not even have a flashlight. And there were black bears in the area.

Mike Haller had served in Vietnam as a Navy medic, so I knew I was in good hands. Still, I really started to worry. I was exhausted, more than a bit spooked in the dark, walking along a rolling road I could hardly see, and it was getting later and later. And I had to be up fresh in the morning to supervise the important photo shoot, or my butt would be grass, and Tom Blee would be the lawnmower.

Mike and I walked for what seemed like hours and finally reached the Camp. We were both totally breathless as we staggered into the office of the officer on duty in the only lit-up building that we could find. When we told him that we were stranded out on Sharon Trail many miles from his office and needed a tow, he informed us that the Camp telephone could only be used for government business. Needless to say, we were irate. We faced another three- or four-mile walk in the pitch-black dark back to the small Grayling community before we could stumble into a Shell station and tell them our woes. In the morning they drove out, picked up our vehicle on a hook, and we proceeded with our photo shoot.

How To Hunt Older, Smarter Bucks

How To Hunt Older, Smarter Bucks