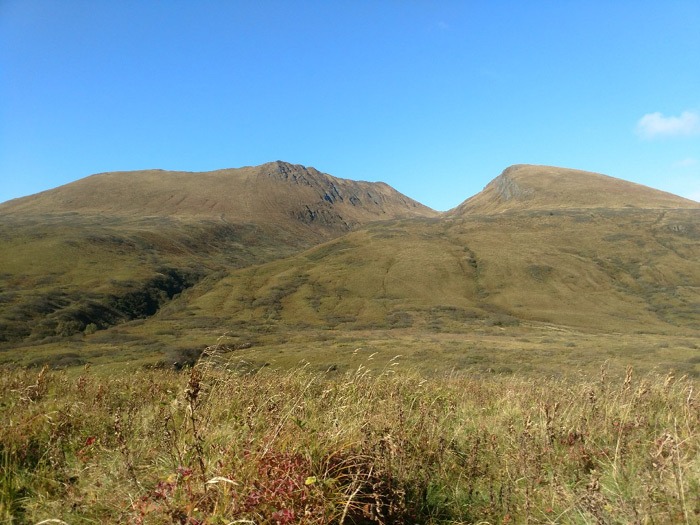 These are the mountains we glassed in hopes of finding a good buck.

Before daylight, we drove to a spot about an hour’s drive from Kodiak.  The plan was to set up and glass the surrounding mountain sides. Once we saw a buck we would go after it.

This area was unique in that we were only a couple of miles from the ocean, so we had some beautiful country to observe.

One thing I should mention about the mountains of Alaska is, they’re steep.  I had just finished a deer and elk hunt in the mountains of Nevada and figured I was in pretty good shape for the challenge Alaska presented.  I was wrong.  Although the mountains were not that tall, maybe 4000 feet at the highest spot on the island, they were tough to climb and worse coming down.  I used walking sticks, ski poles and they were a blessing.  You definitely want to take some if you plan a trip to Kodiak.

Wildlife was abundant in the area but not the kind we were looking to find.  A domestic buffalo and elk herd roamed the area and we saw them every day.  We could see whales breaching in the ocean and we saw 22 goats on one of the mountains we were glassing.  Goats were seen nearly every day.

We did see about 20 deer on one day and 3 of them were bucks.  One of the bucks looked nice but he was a mile away and way up on the mountain.  Before we could do anything, he ambled up and over the mountain.

This spot was one we would frequent a lot over the hunt, mainly because it offered a view of some vast country and the kind of vegetation the deer preferred.

After four days of hunting we hadn’t come close enough for any shots and saw only one buck I would have shot.  I was a little disappointed but we still had several days to hunt.

PNUMA: How A Temperature Drop Can Hurt Your Hunt

Papa BEAR: Chap 3: The Inside Scoop