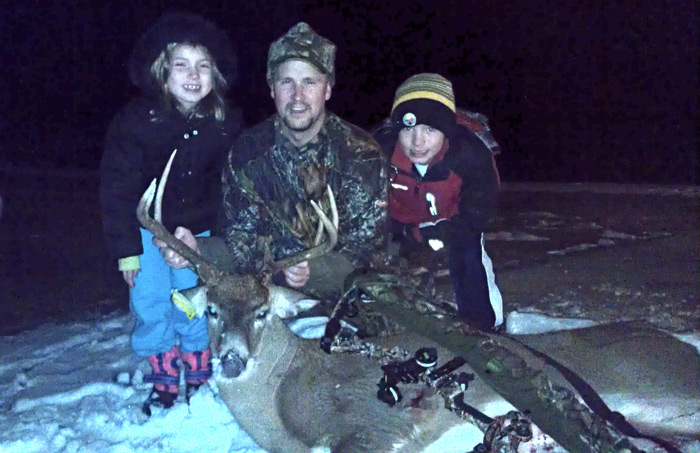 Surrounded by his children, the author, on his third attempt, has his Chip buck on the ground.

Indoor soccer season was in full swing and I had to coach practice on Tuesday and Wednesday. It wasn’t until Thursday that I would be able to hunt again. There were only a few days left in my archery season and I was hoping to see Chip again.

I pulled camera cards late on Wednesday. Chip was back on the 100 acres across from my house. I decided to hunt the 100 acres the rest of the archery season. I would have to hurry home from work each day and get into the stand as quick as possible. I was hoping my plan would work.

On Thursday I drove home from work and dressed a quick as possible. There was still a blanket of snow on the ground but it had now turned crunchy. I was going to have to take my time getting into the stand so I wouldn’t spook any deer. I headed to my stand that was in the open woods where 5 features met. The 15 foot ladder stand was located in a slim finger of woods surrounded by CRP field, a standing corn field, cut corn fields, thick pines and an oak flat.

On my way to the stand I noticed fresh tracks all around my stand. As I was climbing to the stand I could hear crunching coming my way. I finished my climb, pulled my bow up and saw a small buck walking my way. Behind him was another buck and to the left of him was still another buck. All of them were young but they could care less that I was even near them. My wind was right and they could not smell me but I wondered what they were doing.

Scanning the woods I saw they had surrounded a thick patch of multiflora rose bushes. I grabbed my binoculars and looked in the mess of brush. Bingo! There she was tucked away in the center, a lone, hot doe hiding from the younger bucks, trying to stay still. The three young suitors watched her as she hid. In the cut corn field I could see another small buck coming to join the party but he was running at a pretty good pace. Behind him was a bigger buck that I knew right away was Chip! He was the dominant buck trying to breed this doe and the immature bucks were doing their best to keep that from happening. Chip ran into the open woods and all of the other bucks scattered. He circled the brush looking for a way into his prize. He circled to the back of the brush and stopped. He was standing behind a tree so I ranged the tree for distance. The tree was 40 yards and I knew I could make that shot! There was a “V” in the tree and my shot was wide open. I figured this was my only chance.

Dialing my HHA sight to 40 yards I drew my bow. I followed my usual sequence and let the Rampage fly. I watched it in flight as it hurtled, like a missile toward Chip. My heart sunk when the arrow passed directly under his chest and buried in the ground. He didn’t move. I grabbed another  arrow and decided to range Chip and not the tree.  I thought he was standing closer to the tree but my rangefinder read 48 yards. With the weight of the arrow no wonder I went under him.

The doe Chip was watching stood up and made a mad rush toward the standing corn. The chase was on and all of the bucks took off after her. The dominant buck chased all of the other bucks away before returning to his love. In a matter of minutes Chip was in the corn with his doe. I watched his antlers rise out of the corn as he topped and bred her in the corn. This was the second time I had seen this wonder of nature from a tree stand. The doe emerged from the corn first and headed my way. Chip was right on her tail. She passed through my opening at 35 yards and went into the thick pines. Chip made the mistake of stopping in the opening and looking for the younger bucks who were starting to return to the chase.

This had to be the moment. I had already given this buck 2 free passes. I drew my bow and released the Rampage. This time the arrow was true and blew through Chip who immediately jumped and bolted for the standing corn. I listened quietly for any sound of him falling but heard nothing. I knew the familiar sound of the Grim Reaper opening as it passed through deer and knew it was a good, killing shot.

The younger bucks, not too distracted,  walked by my stand intent on finding the hot doe. The sun was setting quickly and I wanted to find my two arrows. I climbed down the ladder stand and located my first arrow. Still in great shape and the Reaper head as well. I cleaned off the dirt and mud and placed it back into my quiver. I found my second arrow, the white snow around it stained red with good blood. The Black Eagle Rampage and Grim Reaper head had found its mark.

The blood trail was short with a ton of blood covering the snow. The buck didn’t even make it 30 yards and had expired on the edge of the cornfield. The arrow had found his heart and death came quickly. I was so excited to finally to see this great buck on the ground and get my hands on him. I saw the unique chip shaped point on his right main beam and traced it with my fingers. All of the trail camera pictures and encounters were now over. I drug Chip to the edge of the field and went back to the house to let the kids know I had a buck on the ground. I called my buddy Jake Zimmerman and he came to help me drag the big bodied buck out of the woods.

Jake and I were drenched in sweat by the time we got the buck to my house.  After the pictures I hung Chip up on the scale for the night. The warrior tipped the scale at 193 pounds dressed out. I scored his rack and came up with 112 inches. Chip was going to look great on my wall with my other bucks.