Two For Two On WI Bucks 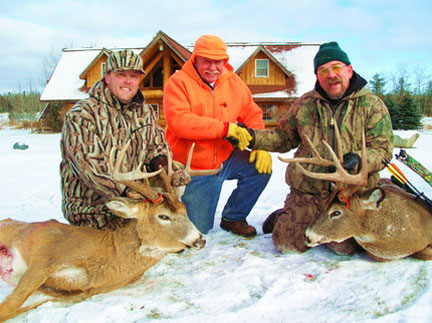 Russ Bettschen and I chatted aloud, perched high in a deer-shanty overlooking heavy, Northern Wisconsin timber. We’d been there since 10:00 a.m. and were ready to move to another location for our evening hunt.

Suddenly Russ’ voice dropped in an intense whisper as he blurted out a single word, “Deer!”

Moving through the white, wintry landscape directly in front of us, the forms of five whitetails approached the tower.  Russ held up one finger and mouthed the word, “Buck!”

I turned on my video camera and listened as it bemoaned starting up in the sub-zero cold.  When it was hitting on all eight cylinders, I slowly eased it out of the window, found my targets, focused and began to record.

The small herd consisted of a large doe, a yearling doe and two large fawns.  The fifth member was a wide-racked, 9-point buck that moved cautiously allowing the others to lead the way to feed in the freshly fallen snow.

When the others began to eat, the buck moved to the end of the line and hungrily vacuumed up his share.  The wary whitetail positioned itself facing the tower, hiding its rib cage from Russ.

A bone-chilling Northwest wind blew stiffly into our faces, and I could hear Russ’ heavy breathing as he tried to control his excitement.

At last, the big whitetail buck  moved down the line of grain, turning broadside.  The stillness of the midwinter day was shattered as the crossbow launched its arrow, scattering deer to the four winds.  All except for the buck, that is.

The arrow passed through the big deer, inflicting lethal damage.  It ran about forty yards, stopping at the edge of the woods.  It looked around in confusion and then walked into the thick cover of the forest.  From the way he moved, both Russ and I knew that the hit was too far back.

We waited a few minutes until the tremors that wracked our bodies from the cold and the surging adrenaline began to subside.  After an animatedly discussion of the events that had just taken place, Russ descended from the tower and recovered the arrow.

The shaft was smeared with dark red blood.  The buck was mortally wounded, but our recovery would have to wait more than the standard hour.  We decided to let the buck find a bed and expire and not push him. We returned to the cabin to wait.

The past three days we deerhunted on Palmquist Farm, which is located in Northern Wisconsin west of Rhinelander.   In spite of the freezing temperatures, we saw half a dozen different big bucks during our stay as well a large number of does, fawns and yearlings.

We had adopted a “midday to evening” hunting schedule because of the extreme cold.  We rose before daylight to join the regulars around the farmhouse dining table for coffee, breakfast and tall tales of adventures from years gone by.

As the day began to begrudgingly warm — lifting the mercury toward the zero mark, we headed  into the field to catch the midday movement of the herd, hunting straight through till darkness chased way the day.

Helen, our lovely hostess, packed us a big lunch so that we would not perish from starvation.  Then we would bundle up, collect the tools for our assigned tasks and head into the thick forest in hopes of seeing a large whitetail buck.

On the second night of our hunt, we watched an older 8-pointer that Russ gave a pass.  Its rack, although respectable, was not what it had once been so he decided to wait for a bigger one.

Later, when we related to our host Jim, he suggested that we go back out and that I try to take the buck we saw the evening before.  Jim’s suggestion stunned me!  As the cameraman, I normally video other folks hunting, but now, because of Jim’s kind generosity, I was going to get a chance to take a buck with the crossbow.

We headed for the Double Bull ground blind that we had erected the day before and settled in for the last two hours of daylight to wait for the 8-pointer’s return.

We applied a healthy dose of StonyBrook Outfitters Scent Eraser Field Spray to the inside of the blind and to the exterior of our clothing.  Although the Double Bull blind does an outstanding job of eliminating human scent, we wanted the extra insurance that is provided by using an effective and proven scent eliminator like SBO’s field spray.  It just makes hunting from a blind that much more effective.

In the last half-hour of the frigid dusk, deer popped in and out of our shooting arena like mallards over a wild rice bed.  There was some obvious rutting activity going on and the deer in our area were behaving just like a bunch of wild animals!  Even though they were within several yards of our blind, not one animal gave our hiding place a second look

At this particular location, an old doe that was not only smarter than the other deer, but obviously smarter than we were, had plagued us the day before as we sat in the tower.  She knew we were there from the onset and kept all the other deer from venturing out into the open.  Even this seasoned veteran of hunter relations, however, failed to pick out the blind, which was deeply concealed among thick pine trees.  When we had left the house, Jim gave us strict instructions to take that doe out of the gene pool, if given the chance.

As the day began to darken, I finally got a chance for a shot at this troublemaker.  The haughty whitetail stood 25-yards in front of us surveying the area as my crossbow scope’s crosshairs divided its body into quadrants from the center of its rib cage.

As I began to squeeze the trigger of my crossbow to permanently remove this problem from existence, Russ whispered, “Don’t shoot!  Here comes the buck!”

That wily, old whitetail doe was not only intelligent, she was lucky!  I eased my finger off the trigger and waited for the buck to enter my window of vision.  There was still plenty of light, but time was running out.  The buck finally moved into sight and stood facing the blind watching the learned, old doe manage and rule the other deer in the group.

The buck stood nervously taking in its surroundings, while I stared back through the sights, patiently waiting for a shot at its rib cage.  As the doe bullied every other deer in the area, the buck became nervous and cautiously turned to move back toward the thick cover.

When it was completely broadside, I popped the trigger of the crossbow!

The cold night air was filled with the sharp resonance of the crossbow launching the arrow and the exploding snorts from startled deer!  The muted drum roll made by dozens of hooves pounding the frozen ground failed to cover the perceptible, hollow thump of the broadhead slamming into the buck’s rib cage.  Then all was silent!

Abruptly, Russ and I were sitting in the dark blind looking out at an empty field, shaking in our boots!  The tremors were not caused by the cold, but instead from the excitement of what had just happened and the adrenaline that surged through our systems.

Since neither of us saw where the arrow hit, we decided to find it for an examination of telltale sign.  However, we could not find it, which to me, was not good news!

Quickly deciding to trail the animal, we found the tracks of the big buck.  There was only an occasional drop of blood along its escape route making me even more nervous about the shot.

We entered the heavy woods, tracked for another 40-yards, and spotted the buck lying in a huge pool of freezing blood.  The shot had been a perfect, 30-yard bullseye!

Dragging the big whitetail out of the thick woods, we headed back to the blind to get a knife.  I pulled out my flashlight to make sure that batteries weren’t frozen as we walked.  When the initial beam hit the ground, it illuminated the florescent vanes of my bloodied arrow lying right at my feet, a full thirty yards beyond where we had been looking for it!  Timing is so important!

We field-dressed the buck and then went looking for Russ’s buck.  Retracing our line we soon found the first buck as we expected, bedded down where he too slide into the nether world. We collected both bucks, taking photos and reveling in the afterglow of the best hunt Russ and I had ever shared.

There is no doubt in my mind that taking this big whitetail from the ground was made possible by the Double Bull blind and the effective performance of StonyBrook Outfitters‘ Scent Eraser Field Spray.  The combination of these two products, allowed two human beings to sit completely undetected in close proximity of a nearly a dozen whitetail deer.  Thank you Double Bull and StonyBrook Outfitters.

Michele Eichler: Tips To Self Film Your Hunts