by Robbie Cramer
in Bowhunting Posts
1 0
A A
0

Whenever a deer moves around in the woods, it leaves signs that it has been there. I’m not talking about stuff that’s easy to see. I mean, you won’t find a deer leaving a note for you that says something like “I was here at 5:30, be back same time tomorrow,” or anything like that. Deer move for two main reasons, to get something to eat and to find a place to rest or sleep (called bedding down). They leave signs when they do these things, and you can learn to find them.

Whether you’re scouting or hunting for deer sign, you have to pay attention to the sign you’re leaving in the woods. You don’t want to leave messages that let the deer know you’ve been there! That may make them move somewhere else. If you can, wear rubber boots (they don’t leave scent) and try not to touch branches as you walk through the woods’ that’s nose level for a deer.

Two of the easiest things to look for are deer tracks and deer poop they leave a lot of both! Their tracks are best found in places where the ground is soft, like around water or at the edge of a farm field. They leave poop everywhere: did you know that a deer goes to the bathroom (number two) from 27 to 34 times a day? You can even tell how old the poop is, or how long ago the deer made it. Old poop is dry, and you can break it apart easily with a stick. Really fresh poop will look shiny.

Closer to hunting season in the fall, male buck deer start to leave signs called rubs and scrapes. If they travel enough back and forth from one place to another, they start to make paths called deer trails, or game trails. 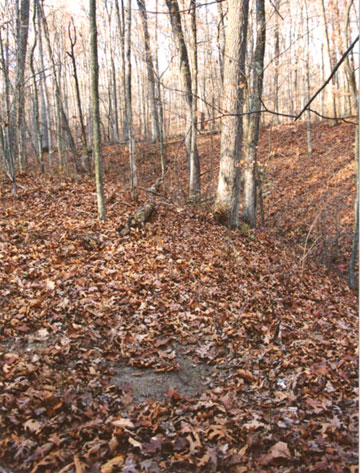 Another way to look for deer and deer sign is from far away, using binoculars. With binoculars or even a spotting scope, you can look at deer in farm fields late in the afternoon, before the season starts. That will give you an idea if any big bucks are living in the area.

You can also use binoculars from high places and look over the land. Sometimes you can see places where deer would be most likely to travel, like patches of woods between open fields. Remember that deer and other wild animals don’t want to work any harder than they have to when they move from place to place. They stay away from areas that are boggy or really steep.

You can do some scouting even using a topo map. Topo is short for topography, which means the lay of the land. On that kind of map, lines that are close together show places that are steep, like the tops of mountains. Roads, swamps, and waters like ponds and streams are marked on the map. It’s pretty hard to pick a place to hunt just using a topo map, but looking at that kind of map can really help you pick the best places to do your scouting. A great place to get a good topo map of the area you want to scout is MyTopo. MyTopo makes it easy to get exactly what you need for proper scouting.

When you’re scouting, look hard for plants and things that deer like to eat. In the fall, deer put on as much weight as they can because winter is coming. They like to eat corn, apples, meadow grass, and acorns. People call this the “food source.”

Once, some deer biologists did a study on a bunch of deer that they were keeping in a pen. They put out three piles of food, corn, apples and acorns. The deer picked the acorns every time. Even if the acorns aren’t falling yet when you’re scouting, you can use binoculars to look up into oak trees and see which ones have the most acorns. Acorns usually fall first from trees that are on ridges or high ground, because those trees get more wind. But, trees closer to water usually have more acorns.

Once you find a lot of deer sign, you know what area to hunt. To really see what is in your area and to determine when and where they move, I advise using a quality trail or wildlife camera. You follow instructions, set them out as directed and then check it regularly during times deer are not moving. You also want to be very careful not to disturb the area any more than absolutely necessary. With good photos to judge you will know everything you need to know about your area and the game that it is in it.

You also have to pay attention to wind direction. Deer have a really good sense of smell, and if they know you’re around, they won’t come near. Plus, after all that work scouting, you don’t want to ruin it by having a deer smell you and run away.

We have 10 million sensory cells in the lining of our nose, and a dog has 220 million, Dr. Samuel said. A deer probably has more than a dog, because it has a bigger nose.

You could say that a deer could smell a pair of stinky socks in your gym bag inside your locker — from outside the school! So, use the special soaps available to de-scent your hunting clothes, right down to your socks, and you. There are also special Scent Killer sprays for things you can’t put in the washing machine, like you bow and arrows or boots. And do your best to hunt from a spot where the wind is not blowing from you to where you expect the deer to walk. If you do enough scouting, you will have a couple places to go for hunting. Check the wind and let that make up your mind where to go each day.

This article on Deer Scouting is SPONSORED BY

Frostbite: What To Do