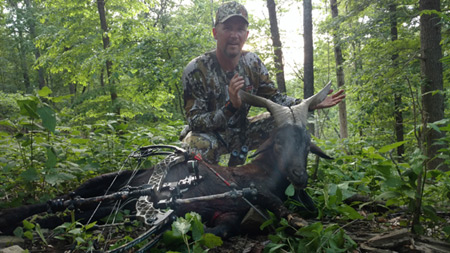 Over the past few years, I have become more interested in hunting exotic species. Some of the species I am interested in are, Axis Deer, Fallow Deer, Sika Deer, Blackbuck Antelope, Mouflon Sheep, Aoudad Sheep, Corsican Sheep, Ibex Goat, Red Deer, and Catalina Goat. There are many more species as well but these 10 make up the Super Exotic Slam. I am slowly working my way towards this goal, and I am having a wonderful yet challenging time.

In 2014, I hunted my first exotic species, Corsican Sheep, at Mountain Meadow Hunting Preserve. My wife had surprised me with a wild boar hunt, and while I was at Mountain Meadow I harvested a beautiful Corsican Sheep. Hunting with archery gear I was able to stalk into bow range and put a Black Eagle Rampage through the trophy. I was hooked from the very moment I put my hands on this amazing animal. This began my love affair with exotic animals.

The following year, I headed to Tusk and Tine Outfitters where I had my first experience hunting Wild Boar. Wild Boar is another animal that is considered and exotic species. This was a new experience as I hunted the boar from a treestand.

After a few hours on stand, I was rewarded with a 25 yard shot.With another well placed Black Eagle Arrow, I had another amazing trophy. The Grim Reaper head did the trick and the boar did not go far at all. I was beginning to realize that the exotics were a blast to hunt and very delicious to eat.

During the summer of 2016, I went back to Tusk n Tine Outfitters to hunt Catalina Goat. I had never really hunted a goat before but it proved to be a cat and mouse game. Hunting with archery gear I needed to be able to close the distance to under 50 yards. This goat was not cooperating, and I spend a day and a half stalking him. On the second day of my hunt, I was finally able to get the upper hand. Using the terrain to my advantage, I was able to get above him. As he slowly closed the distance I drew my bow and releases a perfectly placed Black Eagle Carnivore. The Carnivore was tipped with a Grim Reaper 3 blade head and passed right through the goat. I watch the large Catalina Goat expire less than 50 yards from the shot. He was tall and thick and very heavy. I was 3 for 3 with the bow on Exotic Species.

In 3 years, I had taken some very nice Exotic Species with my bow. 2017 would kick off and end with more great Exotic game. It all started with a Fallow Deer hunt in January of 2017. Again, I was at Tusk n Tine Outfitters with my bow and a quiver full of Black Eagle Zombie Slayer. The only different was all of my arrows were tipped with Grim Reaper Carnifour heads. With my G-Force Evolved camo and my friend Lee Salsgiver at my side, I was able to harvest a Gold Medal Chocolate Fallow deer. Using some spot and stalk hunting skills, I was able to get a 35 yard shot at the fallow. The BEA Zombie Slayer and Carnifour combo passed right through the Fallow Deer. The red blood was easy to see on the white snow. I had harvested one of the most beautiful animals I had ever seen. Along with being a great trophy, my family learned that Fallow Deer was an amazing venison. It is by far one of the most delicious exotic animals I have eaten.

June couldn’t come fast enough as I had a hunt for Texas Dall sheep planned with some members of the Nature’s Essence Hunting Staff. Many of the guys on staff were after some Wild Boars while I was off on my own looking for a nice Texas Dall Sheep. There was a small group of rams that I had spotted early in the morning, and I slowly stalked and glassed them to locate a solid Dall. The weather was warm so I made sure to spray down with my Nature’s Essence cover scents and play the wind in my favor. With my new Athens Revelation in hand and some Grim Reaper tipped BEA Zombie Slayers I was able to get a good vantage point and watch the Texas Dall walk my way. The small group of sheep walked a logging road directly to me. The well placed arrow sliced directly through the Dall and he didn’t go far. Another Exotic Species to check off the list. This sheep actually put me halfway through the Texas Slam which is 4 different sheep.

My 2017 would finish out with a flurry of activity hunting Exotics. The week of Thanksgiving found me at The Pig Farm, in Pennsylvania, with my Athens Revelation. While I was at the Pig Farm, I was able to harvest another monster Wild Boar, a Spotted Fallow, and a Mouflon. The hunts were amazing and just such a blast. I harvested all 3 animals with the same BEA Zombie Slayer. On this hunt I used the new Grim Reaper Hybrid head and saw ridiculous results. I got full penetration and the arrow passed through each animal. The Spotted Fallow put me one away from the Fallow Deer Slam and the Mouflon put me one more animal closer to the Exotic Super Slam and the Texas Slam.

The 2017 season was coming to a close, and I had an exciting year. Since 2014, I had taken 8 Exotic Species with my bow. The week of Christmas I was invited to a hunting preserve to hunt Blackbuck Antelope. After talking to many people about hunting Blackbuck, I decided that I would use my bow but take a rifle for backup. Many of the people I had talked with told me that hunting Blackbuck was extremely difficult. They are a small animal, they have a great nose, and very good eyesight. I was hoping I could get a BEA Zombie Slayer in the pump house of a nice Blackbuck.

The weather was about perfect for December. The temps were in the 40’s and there was little to no wind. During the night a small amount of rain had fallen making the leave quiet. I grabbed my Athens Revelation and head out to locate and hunt a Blackbuck. Early into my hunt, I was able to get within 25 yards of the crazy beast twice. Each time I was not able to get a shot off. I spent the rest of the day spotting and stalking the crazy antelope. In 6 hours, I had put on 13 miles going after the Blackbuck and he was always one step ahead. With only an hour of light left, I switched weapons and grabbed my Ruger 308. I had a pretty good idea where the buck was bedded and headed off in that direction.

After walking quite a while, I spotted the Blackbuck ahead of me with some Red Deer. I used the logging road to my advantage and closed the distance to 85 yards. I shouldered my 308 and took aim. I slowly breathed out and lightly applied pressure to the trigger. The Ruger barked, and I watched the buck fall in his tracks. I let out a huge sigh of relief and made my way to the downed buck.

In pure amazement of the trophy in my hands, I gave thanks to God for an amazing hunt. The spiral horns and the colors of a Blackbuck leave me speechless. I was closing out the 2017 season with an amazing trophy and memories that will last a lifetime. This now gave me 5 of the 10 animals in the Super Exotic Slam.

What will 2018 bring this year? Not sure, but there are three animals I want to pursue through the year. I desperately want to go after Aoudad, Sika Deer and Axis Deer. All three are on the radar for the 2018 season. My goal is to finish the Super Exotic Slam before 2020. Who know what can happen in the next 3 season!

Winter: Where Do Animals Go?

Winter: Where Do Animals Go?