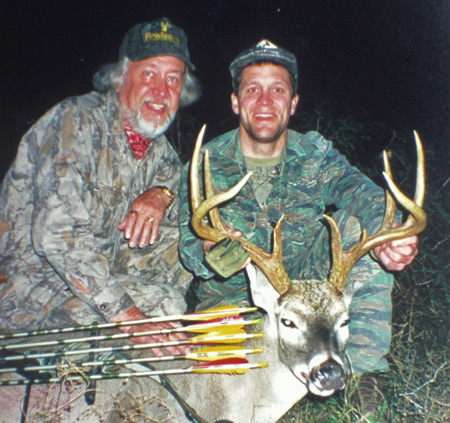 THE 15-YEAR-OLD BOWHUNTER was shocked to see two deer standing at the field’s edge below his treestand. He hadn’t heard a sound, caught any movement. Suddenly, poof, there they were, silhouetted against a backdrop of yellow cornstalks.

Heart hammering, hands shaking, the youngster slowly reached for his bow with an arrow already nocked and ready. The two whitetails had begun browsing by the time he started to draw. That’s when he discovered he didn’t have the strength to reach full draw. Oh, no! the panicky teen thought. “I’ve heard about buck fever and this must be what it’s like!”

Sucking in a deep breath of cool October air, he tried again and this time his fingers reached a familiar anchor point. The movement caused the nearest deer to look up, but by then Dave, who learned to shoot instinctively, had picked a spot on the broadside deer’s ribs behind its shoulder. A split second later the arrow flashed away and disappeared through the whitetail’s chest. The shot placement was perfectly centered in the heart/lung area. Both animals instantly whirled and flagged away. Yet bright red blood on the yellow leaves told the excited bowhunter that he’d just tagged his first-ever whitetail. 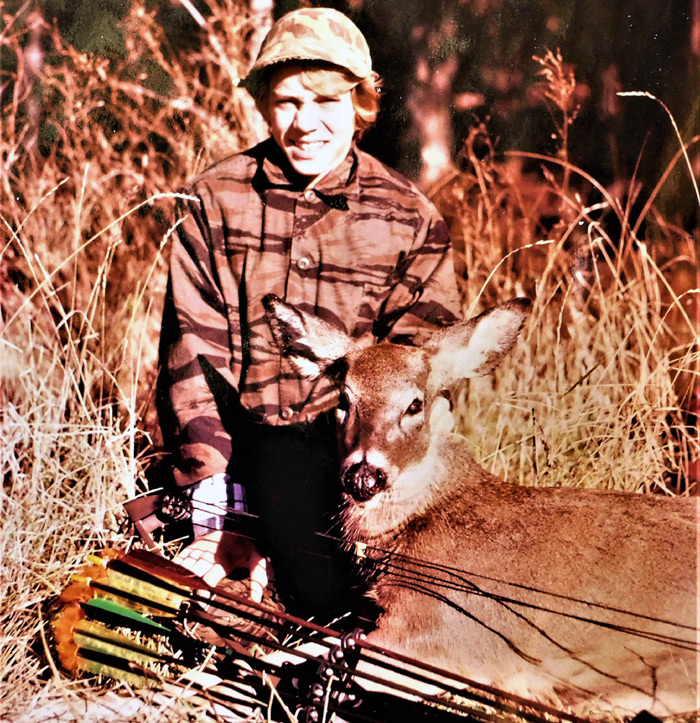 Dave James was 15 when he tagged his first deer on a father/son whitetail hunt in Wisconsin way back in 1978. He’d worked hard to hone his shooting skills before heading to the woods. The hours of practice with his Jennings compound paid off.

Although that unforgettable father/son Wisconsin bowhunting trip took place nearly 40 years ago, it remains nearly as fresh in my mind today as when my son, Dave, and I followed the ample blood trail to recover his first bow-killed big game animal. I know that my son’s recollections are even sharper. 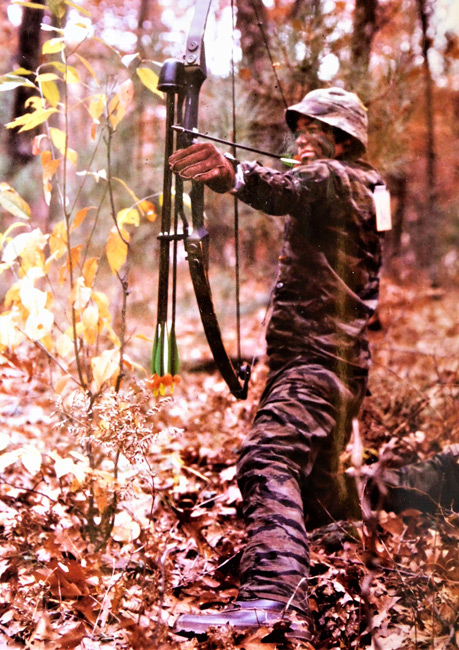 Once a bowhunter learns the basics of accurate shooting, it’s wise to practice shooting in various positions for any real-life hunting situation (standing, sitting, kneeling, etc.). All hunters also must learn his or her effective shooting range and not exceed it. Poor hits and wounded game give ethical and responsible bowhunters an undeserved black eye.

MY OWN FATHER never drew or shot a hunting bow. A workaholic devoted to making enough money to feed and clothe his family, he only hunted — with a borrowed shotgun – for food, not sport, adding small game, upland birds, and waterfowl to the family dinner menu. Regardless, my dad patiently taught me gun safety and shooting skills, letting me tag along with him on his occasional southern Illinois hunts for ducks and geese, squirrels, cottontails, and quail. He did the shooting; I proudly carried the critters.

Despite the fact we shared very few hunts after I became a teenager and grew older, I did have the benefit of a close family member, tutor, and mentor teaching me the basics and introducing me to an exciting outdoor world I would come to know and love. That’s exactly why I did the same, first for my two younger nephews and later on for my own kids. Later still, I invested personal time and hunting tackle to help neighborhood youngsters start off on the right foot. It’s an annual undertaking that I gladly pursue to this day. 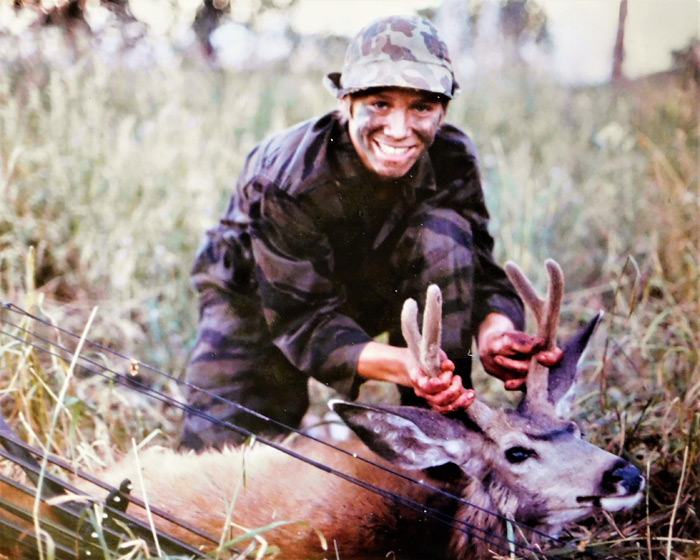 I was at Dave’s side when he arrowed this forkhorn muley during a Colorado hunt. The smile says it all for a beginning bowhunter and proud dad on a shared Rocky Mountain adventure.

Additionally, for the handful of those I’ve personally instructed one-on-one, as a Bowhunter Education instructor and volunteer, I’ve always used my books, magazine features, columns, and online posts to pass along pertinent how-to hunting information and tips designed to educate and inform readers. And so I offer a respectful tip of my camo cap to all of the men and women who feel the same way I do and have taken it upon themselves to make certain beginning hunters can rely on them to offer advice, answer questions, and do whatever it takes to help others become competent, responsible hunters. 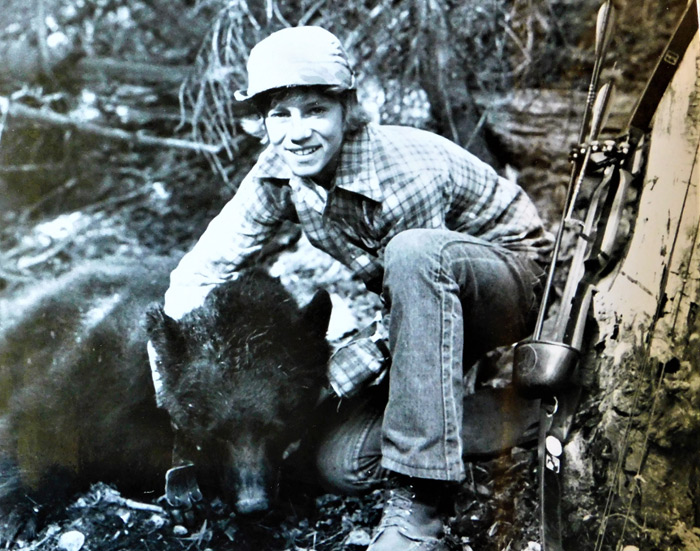 A 1979 spring bowhunt ended with Dave tagging this Colorado black bear, his third big game species in as many years. I documented each bowhunt in Bowhunter Magazine features at the beginning of a teenage boy’s hunting career that he enthusiastically continues to enjoy some four decades later.

To all readers of these words who already work with tomorrow’s generation of hunters, keep it up, please. To anyone who not yet takes time to lend a guiding hand, please consider it. It’s a rewarding investment of time and effort that, in fact, can change young lives for the better while guaranteeing that the art and challenges of hunting will continue to be met and enjoyed.

NOW IN HIS MID-FIFTIES, Dave continues to make seasonal hunting memories decades after our Wisconsin whitetail adventure. Looking back, he and I can easily recall the other father/son bowhunts and bowhunting firsts:

There was Dave’s first muley buck, tagged on an August Colorado adventure; his first black bear taken the following June, also in Colorado; a shared pronghorn antelope bowhunt near Rawlings, Wyoming, where we each tagged bucks from blinds set up at the same remote prairie watering hole; an Idaho bear hunt where we both tagged summertime bruins; and later one August there was a successful fly-in caribou hunt in the Northwest Territories. The list goes on and on. 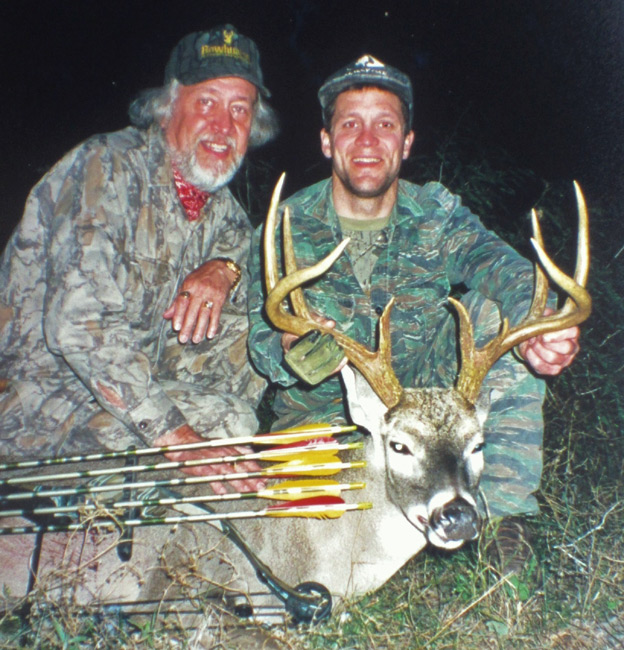 Only the Good Lord knows how many bowhunts my son and I have shared over the decades. The buck in the photo was one Dave killed on a Texas hunt in the early 2000s. We both know that making outdoor memories is a great way to bring family members closer.

And while I wasn’t there with them this past September, Dave and his son Marc made father/son memories of their own while elk hunting in southeastern Montana. The phone call to our Indiana farm broke the good news that Marc – at age 17 – had tagged his first bull. 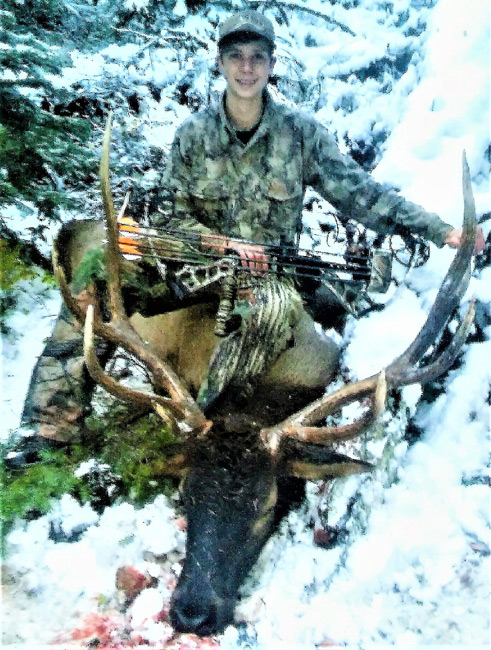 Last September Dave’s 17-year-old son tagged his first bow-killed bull on a father/son elk hunt southeast of Bozeman. That special moment will last both men as long as they live.

I couldn’t have been happier or more proud. For a young bowhunter and his dad. For their proud family. I know the hunting tradition continues to live on in the James family. How about making sure that bowhunting continues to be alive and well in yours?

NOTE: My tutoring philosophy is simple, really. Get to know your bowhunting equipment. Learn to shoot accurately from various positions (i.e., standing, kneeling, and sitting). Know your effective shooting range and don’t exceed it. Always strive to put a razor-sharp broadhead through both lungs for quick, clean kills, shorter blood trails, and consistent recovery. Never hunt from elevated stands without wearing a body harness and using a fall-restraint safety line while climbing into or out of the stand. Finally, set a good example for others to follow.

If you like to read M.R.’s bowhunting adventures you will love his newest book, Hunting the Dream: A Memoir, available now at Amazon. 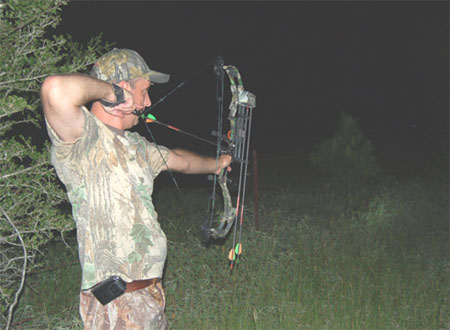 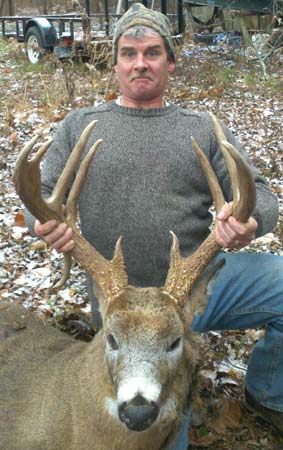 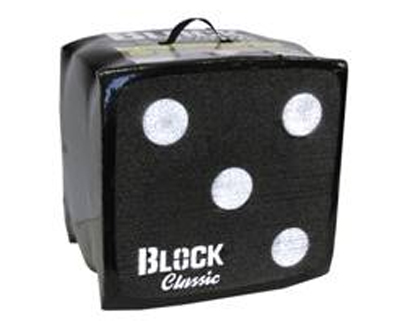 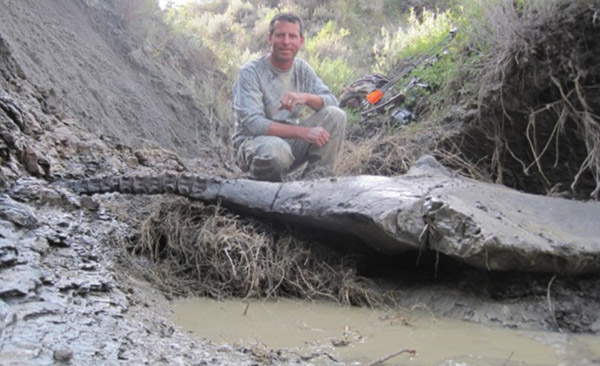