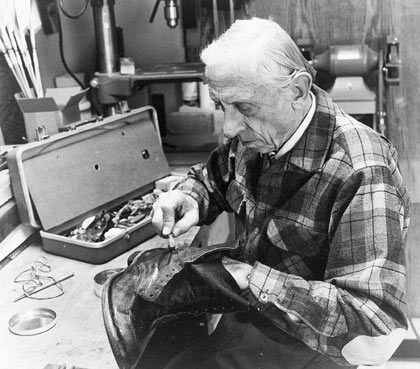 FRED BEAR SHOWED ME HOW

My first foray into exploring Fred’s mind to get him to write down and share his bowhunting tips, many of which also apply to gun hunting, came in 1966 when I was working on ideas for the 1967 Bear Archery advertising/sales promotion program. It occurred to me that most hunters would love to know how Fred had been so successful as a hunter over the years.

And by promoting the idea that these tips could apply to both bows and firearms, we were helping to support our “Become a Two-Season Hunter” marketing strategy. That idea led to our eventual “Fred Bear’s Secrets of Hunting” record that I helped produce out in Hollywood with Fred and Curt Gowdy.

Shortly after we completed that dealer-loader record promotion, some of the guys at Bear came up with a “Fred Bear Showed Me How” decal that they took along with them down to one of the trade shows we all attended. It was done in two colors to save money. This was in 1969. People got such a kick out of the decal, including the commercial airline pilot that they flew with to Houston, that we later reproduced the small sticker in four colors and gave them away by the gazillions over the years. That’s where the title for this chapter came from.

As I searched for a theme to use in our 1975 catalog, I remembered the interest in the “Secrets of Hunting” record and suggested to Fred that we do something similar, but strictly around white-tailed deer. Whitetails were then, and remain today, the species most hunted by America’s bowhunters and firearms hunters. Fred and Bob Kelly both liked the idea. So Fred and I got to work.

Naturally, I couldn’t write these tips for Fred, since I was far from an expert on deer hunting; but he agreed to work on them with me. Fred also wrote a great deal of the theme copy himself for the 1975 catalog, including the lead-ins to many of the bows. In many cases I sketched out the copy for him, as we normally worked, and he’d go over it and change it into his style of talking and writing. It worked out pretty well that way over the years.

Here, then, are Fred’s tips on hunting the white-tailed deer. These appeared as stand-alone copy blocks with a line drawing of Fred paddling a canoe on 17 different pages in the catalog that year. I’ve combined them all here. Incidentally, as always, Mrs. Bear was our editor on these tips and corrected spelling and punctuation for us, as she did with everything I wrote for some 20 years. I’d write the copy, give it to Fred, and he’d take it home where he’d go over it for content and common sense, and she’d tackle the sentence structure and punctuation.

I should point out that these tips were intended primarily for people new to bowhunting; however, I’m sure experienced bowhunters picked up a good tip or two from Fred in these short paragraphs. Remember that he was 72 years old when he wrote these tips in 1974 and he had been hunting deer since the age of 13 when his dad first took him deer hunting on South Mountain near their home in Pennsylvania. And when he wrote these he had been bowhunting deer for 45 years, since he first did it with bow and arrow in 1929. If there’s a young up-and-coming bowhunter in your family, he or she should especially enjoy these practical tips in Fred’s own words …