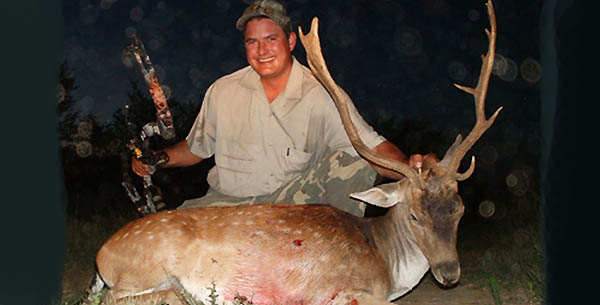 I was fortunate to hunt a few African animals on foot last year. The great thing about stalking is that you learn something new every time. I think if we could do a survey on successful stalks the odds would be overwhelmingly in favour of the animals, but as Gary Player once said, ‘the more you practise, the luckier you get’.

I was invited to hunt gemsbok in the Welkom area. Owing to work commitments I only arrived in Welkom at around 14:00, where I learned that we still had a two-hour drive to the farm. Needless to say, I had done enough driving for the day and asked my friend Floyd if there wasn’t a good lodge close by where we could spend the night. He made a few calls and we were soon on our way.

To my surprise, ten minutes out of Welkom we drove into a beautiful piece of bushveldt with sweet thorn Acacia, the works. On the way to camp we saw black wildebeest, blesbok and impala. We were hunting on Tebohô, and Quartus, the owner, had found a beautiful piece of land and developed it by building a great lodge and stocking it with just about every species you could think of.

There were a few tense moments, but all the animals passed about 20 yards behind me. The fallow deer was still in the bush about 50 yards away. I took a couple of deep breaths and saw the larger of the two males. I ranged him at 42 yards, but a shot didn’t present itself.

The sun was setting magnificently behind me and I could feel a stiff breeze in my face. Now I had two options, stalk closer and perhaps get a shot, or wait it out. Shooting time was becoming very short. While I was still thinking, a good impala ram was feeding towards me from the left. I did not see him but when he saw me from about 10 yards he let the whole world know. I got a tremendous fright and immediately knew my chances were blown. I looked back up at the stags and unbelievably, the big one stepped right out into the last rays of the sun to see why the impala was making such a racket. Perfectly broadside and the rest is history.

On a similar occasion I was hunting blesbok. I stalked to around 40 yards, but with all the cover there was no shot. The wind was good and my cover was excellent, so I decided to wait it out. The blesbok was slowly making their way over to me; some of the females were about 15 yards away, but the male stayed back. Eventually, after about 20 minutes the ram stepped out into a perfect shooting lane.

They were completely unaware of me, so I took my time ranging him at 19 yards, nocked my release and was just about to stand up when I caught a movement to my right – a good red hartebeest feeding at an unbelievable 25 yards. I don’t know where he came from but he was the first prize. I had to turn around and it’s here that things began to get tricky. The hartebeest had about eight metres to walk before he was in the open and he was feeding. The blesbok was coming closer all the time. Eventually they were feeding so close I could hear their teeth crunch. This hartebeest was meant for me.

Quartus, thanks for an incredible hunt! Guys, even though the odds were stacked heavily against us, walking-and-stalking remains the ultimate bowhunting experience!

Where Do The Older Bucks Go?