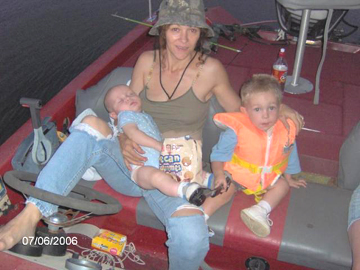 How Sexy is That?

That would be a classic hot rod Ford:
A four-barrel and duel exhaust purring at a stop
Under Saturday night summer city lights
While Merle purrs out the sliding back glass.
They’re looking out the window
Down at some kid tapping out his top 10 pop,
Peach fuzz driving his momma’s Toyota Tercell
With it’s four-banger and four doors, cheap plastic seats
And he’s huffing a cigarette too hard,
But holding it outside
Can’t let Momma know,
When he looks and sees his girl
Admiring
With envy in her eyes…
But she’s not looking at him.
So for the first time in his life
He understands there’s a difference
Between
Wanna-Be and Authenticity.

And yea Baby,
I can love you like that.

It was one of those nights that Oklahoma is famous for – just enough breeze to keep the mosquitoes at bay, and a big yellow baby-making moon laying a romantic ribbon upon the water.   Woodie, Waylon, Willie, and Merle , …ya, they’d know what I mean.

The boat was loaded and we stood in the parking lot at the 10-A landing below Greenleaf Lake.  We were the only people there and the night would have been lovely except we were listening to Big Chris gripe in his big voice about his big @*&%$ bow and his lack of @*&%$ fish that night.

We were fishing late in the evening because the Oklahoma summer had been ferocious.  Babies don’t tolerate that so well.   For that matter, neither do I.

I tried leaving baby Garrison behind on a recent bowfishing trip, because of the heat.  With much trepidation, I handed him over to my generous sister-in-law, Kellie, in her skin tight mini-skirts and ten-inch nails.  I say trepidation because of an incident last year: Out on a pontoon with Kellie and her husband Leroy, she held Everett, attempting to teach him how to count while the rest of us fished.

God love her, the elevator just doesn’t go all the way to the top sometimes.   Sitting around The Village one day a feller told us this joke:

‘A blind man went in to a diner and ordered up some lunch.  While he was waiting, he asked the waitress if she wanted to hear a blond-joke.   The waitress said, “Oh I don’t know about that Mister, maybe you better not.  I know you’re blind, but I’m a blond and so are the cook and the dishwasher!” “Oh, you’re right”  answered the blind man.  “I don’t want to have to explain it three times.”‘

And Kellie said, “What’s the joke?  I want to hear it, go on!  Tell me the joke!”
A silence fell on the boat, except Kellie’s laughter.  I just stood there with my mouth gaping, viewing the train wreck.  Finally I turned to my husband, my eyes big as saucers and finding no help there, I turned to her husband.  The two brothers ducked their chins as their faces grew redder, but Kellie, she just laughed harder until her One-Two’s shook so vigorously I thought they’d capsize completely.

So as usual, skating that infamous thin line between brave and stupid, I left Garrison with her one hot day.   Kerr Lake was muddy and the wind was blowing white caps, but even that’s OK because there is just something so cool about floating the shore lines standing up on a boat (that still isn’t  anything-but-a-fourteen-foot-john-boat) with a bow in your hand.

How sexy is that?   Even better when you run into people you know, like another mother from town here whose son plays with my son.  She was sitting on the dock as we launched the boat.   Or my husband’s niece who thinks I’m a freak for having children at such a late date in life – because when you’re nineteen, anyone over twenty-five is a dinosaur.  I guess in her mind that makes me as old as the pond scum whence first single-celled organisms slithered up on to dry land.

I played it cool, though.  I nonchalantly slipped my hand into my glove and  nocked my arrow, standing on the fore of the boat like an old pro as we pushed off.

The point is, shooting a fish is just icing on the cake when you just look so darn good standing on the boat with that slick Fish Hawk bow in your hand ….  I thought of 2nd grade, years ago when my mother drove up to get me from school in her little red TR-3 convertible and skin tight hip huggers.   The other children at school gasped at me.  “Is that your Mother?”     I was the object of envy.   Who wouldn’t want to have (or be) a Mom that looked like that cool?

I know, that’s definitely a girl thing and a rather ridiculous fantasy, but my husband tells me I look sexy and hey, that’s good enough for me.
We finally gave up the fishing that day and went to pick up Garrison.  Kellie hadn’t taught him to count yet, but she had let him play in some water, soaking his special three-hundred-dollar leather foot brace.    Um, OK…it’s really high time to come up with another plan for child care.

Thus we took him with us next time, going out to Greenleaf that evening with Big Chris and Ruth on their boat.  It was a beautiful evening, the wind calm, the water mirroring the sunset; egrets decorated the dead wood in white while the great Blue’s shook the silence with their haunting calls as they glided low and prehistoric over the surface.

An hour ticked by before I saw the Gar, laid up under a slight shelf at the edge of the water.
This was my first shot that night.
I drew back.

Then the panic!  “Help me get him in!”  I screamed.  Then, “Chriss, get the camera!  Get the camera!”   All my cool went right out the window.   Chriss  fumbled between the two jobs, not sure which to do first.   “Help me get him in!  Grab the camera!”   Finally I was holding the fish, dancing on the deck of the boat singing, “I got a fish!  I got a fish!” staring at his needle teeth and expecting to get shredded any moment.
Hubby gave me the high five.

Big Chris grumbled.  He had laughed at my little bow, holding it like a toy in his enormous hands.  ‘Ha, whose laughing now?’  I thought.

I mentioned in a previous column the big dude who hangs around our shop – shoots a compound that weighs as much as I do with every trick and gadget imaginable connected to it.   He thinks it’s cool because he’s about the only person actually large enough to pick it up and shoot it.  Well, that’s Big Chris.  After half an hour of floating the creek with a thirty pound bow in his hand primed to shoot, Big Chris wasn’t feeling so big anymore.

When we finally loaded up to leave that night, standing in the dark by the water, our large friend made large excuses for his lack of fish, but eventually admitted that if he were going to continue bowfishing, he would have to buy himself a @*&%$ lighter bow.

We went again recently to Lake Tenkiller, the two smaller boys, my husband and me.  Brian was off on some other engagement he had.   One of the real beauties of living in eastern Oklahoma is that there is always body of water just up the road.  (By the way, our house is for sale at www.WildlifeRevivalTaxidermy.com..)  We scared the hell out of a lot of fish that day but only got two in the boat.  Finally we docked on shore and went treasure-hunting instead, finding one very fat brown mouse and two frogs under some rocks we turned over.

Coming in that night a man there asked about my AMS Fish Hawk and I let him shoot a couple rounds out in to the water.  He enjoyed the adjustable pull and admired the speed but then his kids hollered out in the dark they’d found a cottonmouth so he ran off to them and I jumped back in the boat lest Mr. Cotton had a friend in the neighborhood.
It was a good night though.  Every trip holds in store its own set of memories and adventures, from the disturbing site of yet another dead baby doll washed up on the bank naked with big plastic eyes staring into space, to the wonder of watching my two-year-old chase a fat brown mouse across the shore line with high laughter, or the suspense of shooting at the same dumb fish four times in a row yet it still gets away.  Then there was the time Chriss shot and his brand new reel flew in to the water behind his arrow.  After pulling in all his string (thankfully some of it floated!), he had a big Gar pierced perfectly through the lower lip…

Bowfishing is just plain fun, from the excitement of shooting, to just hanging out with my husband to the rocking of the water.   Getting fish is just a bonus prize.

We rolled in way past little bedtimes and carried the sleeping babies in to their blankets.   We hung the bows, popped a couple tops and kicked our feet up, revisiting the trip in conversation till our eyes too became heavy.  Tomorrow it was back to wildlife cosmetic surgeon for him and the universe swirling around little children for me.

But for tonight, it’s gonna be

………… dirt roads
And dash board lights
Bench seats
And cheap wine chilling
In a feed bucket
Because they can do that if they want to.
They put in their time.
They paid their dues.
No,
He won’t be dropping her off late in the dark
Coasting to the curb with the engine silent breaking curfew
(Sshh, don’t slam the door!)
To sneak away from scolding parents
No he won’t be dropping her off
Anywhere but their own front door
The same front door they been sharing for years
’cause they ain’t been kids for quite a while now,
But that don’t mean they can’t
Sneak out in some farmer’s field when they get the urge.
Ya, Baby –  I love you like that.