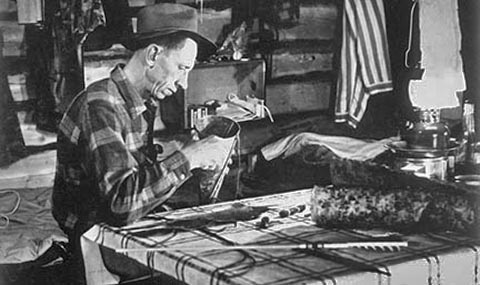 I can’t leave this chapter without recalling an event that happened one fall when Kelly, “Knick,” Gordon Ford, Doc Strider, Dick Mauch and I were on our annual bowhunt together. Fred couldn’t make it for some reason that year. It involved the beautiful and scenic Niobrara River we often bowhunted alongside, and where I shot my first bow and arrow turkey one day while hunting with Fred on an earlier hunt.

I’ll leave that story for another time, but my comic misadventures downing that turkey that day became one of Fred’s favorite after-dinner stories the last couple of years of his life as he spoke at various bowhunting functions around the country. Needless to say, it was a memorable first wild turkey for both Fred and me.

There were plans afoot by the government to build a $385 million irrigation project along the Niobrara that would include the building of something called the Norden Dam. It would cost almost $1 million per farm to build, an average of $5,000 per acre! It would have included a 19-mile, 6,300-acre reservoir and 362 miles of canals and laterals just to irrigate 77,000 acres, only 12 percent that was Class 1 land. It would have taken 10 years to build this 180-foot-high dam.

Michigan State and Nebraska scientists studying the 14 million-year-old Niobrara River fossils said that it was one of the least polluted rivers in North America, and they were working right near the ghost town of Norden where the dam was to have been located. The president of the Sierra Club in Nebraska, originally a supporter of the dam until he found out what would happen to the environment if it were to have been built, later said,

“It’s a financial disaster to the taxpayers and environmental disaster for the river.” It would have had devastating effects on all of the wildlife in the area, both resident and migratory. This included species that overlap in the area such as mule deer and whitetails.

Dr. Keith Harmon, a wildlife biologist from Nebraska said, “The area constitutes a unique ecological area. Among plants, animals and birds, the habitat of a number of species overlap in this area and nowhere else!  In other words, this is the western extreme of the range of certain species and the eastern extreme of the range of other species. Furthermore, the same condition exists with respect to north and south.”

The Niobrara was Nebraska’s last wild river and had just been made legendary in James Michener’s bestseller “CENTENNIAL.” Later, after this controversy was over, Mr. Michener serendipitously and kindly provided the Foreword for my book on the U.S. space program—“All We Did Was Fly To The Moon.”

The minute Dick told us of the Niobrara battle, Fred immediately offered to help in any way we could. You’ve got to remember, Fred grew up as a boy in Pennsylvania trapping along its clean streams, and his favorite activity, other than bowhunting, was flyfishing in our pristine Au Sable and Manistee Rivers in the Grayling area and elsewhere on his travels.

With Dick’s help we gathered the information, and I wrote an entire issue of our Fred Bear Sports Club publication, “The Big Sky,” on the subject with the headline: HELP SAVE THE NIOBRARA RIVER! Our circulation list nationally included all the members of U.S. Congress, members of the Outdoor Writers Association of America (of which both Fred and I were members at the time), all state and federal fish and wildlife agencies and many others.

Many wrote letters of support for the effort to save the river from this unnecessary destruction. That was the positive side of our effort. Now to the comic and not-so-successful side.

One day I received a call from Knick’s son-in-law, Gordon Ford. He and I were the “youngsters” of Fred’s Bassett bowhunting gang in those years. Gordon said he had a great idea to help raise money for the “Save The Niobrara River” campaign. He said he could get hold of a 16mm copy of a well-known film, and we could invite the people of Bassett, where there was no movie theatre, to come see it and make a donation to the river fund in order to do so.

That sounded great to Fred and me, so we told Gordon to go ahead and bring the film out with him. Dick Mauch offered us the use of the basement of the Cornhusker Archery bowstring plant for the showing. Work tables were cleared out, rows of folding chairs set up, and we were ready to go to town.

The basement filled up with youngsters and some adults, among them some of the church leaders of the community. It wasn’t quite the adult male audience we had expected. The lights dimmed, Gordon turned on the projector, and the film that neither Fred nor I had ever seen started to play. It was “Blazing Saddles!”

If you’ve ever seen it, you know there is a scene in the film when there is a great deal of loud passing of gas and other things church ladies bristle at in mixed company. Whew! Were we in trouble!  A voice rang out in the darkness, “Please turn off the movie!” Gordon complied.

One of the matrons of the church, a most beloved member of the community, and a prominent rancher’s wife, stood up and primly informed the audience that this was not the kind of entertainment that she felt “the youngsters of our town should be seeing, and that everyone’s money would be refunded.”

The audience quietly filed out amidst much scraping of chairs, the only sound to be heard in the Cornhusker basement. When I looked over,

Gordon  had already disappeared and he spent the rest of that night and part of the next morning sequestered in his room at the Bassett Lodge. Talk about embarrassed! Luckily Fred never said a word to us about it when he later heard the story, but I know he laughed his belly off on the inside. It was his kind of moment. And he loved the fact that Gordon and I had been “had.”

“At any rate,” as Dick Mauch recently recalled, “The Fred Bear Sports Club was very helpful in the cause to ‘Save the Niobrara River.’ Fred gave us the 16mm film put out by Jeep on Scenic Rivers. It was turned over to the group for showings around the state. It was very beneficial in getting support for Scenic status. And the Niobrara River is now a part of the National Scenic River System.”

Carol Newmark, a local Bassett art teacher created a comic Western sculpture to help raise funds for the “Save the Niobrara River” campaign. Dick donated the costs of casting the sculpture, and the two started a friendship, fell in love and were later married in Fred Bear’s office in Gainesville.

Home Away from Home

Not only was Bassett special to Fred, Kelly and me due to our friendship with Dick Mauch, but it also became the home of what had been our Bear Archery bowstring operation as I’ve just mentioned.

When we decided to divest ourselves of both our leather and bowstring operations in the 1970s, Kelly and Fred turned to two people they trusted to carry them on the way they would have done. The leather line was sold to George Cavanaugh, who owns the Allen Company out in the Denver area, and the bowstring operation to Dick Mauch and some local investors from Bassett. George is a Notre Dame graduate and a fine fellow both Fred and Kelly immediately took a liking to. He, too, was their kind of people. The bowstring operation started up in Bassett in 1976.

On a later hunt out there, Kelly and I visited what by then was called Cornhusker Archery to see the fine bowstring operation Dick had set up with the help of some very nice local people in the Bassett area in his father’s old International Harvester implement dealership building. The occasion was the production of Cornhusker’s 1 millionth bowstring! Needless to say, we didn’t worry about a shortage of bowstrings on our many trips to Bassett, Nebraska to hunt.

In 1989, the year after Fred died, I made a melancholy trip back out to the cabin to hunt with Dick, Glenn St. Charles, and some friends from Florida, Roger Hatfield and his son, Harold, Gene Hannah, Neil Rouse and a couple of others. Roger was Bob Kelly’s son-in-law, Harold his step-grandson, and Neil his stepson. Unfortunately, Kelly’s health was going downhill by then, and he couldn’t make the hunt with us. Margaret St. Charles and Carol Mauch were also in camp with us.

One quiet afternoon Dick, Glenn and I sat around the small kitchen table in the cabin and reminisced about Fred and all of our years with him. Fred’s usual chair remained empty, and I’ll swear ’til my dying day that I felt his presence in the room with us. It was eerie, but very comforting. I think our old friend had joined us that day at the cabin for one last bowhunting bull session with us until we all meet again in the happy hunting grounds.

Links To Previous Chapters of I Remember Papa Bear.